ESPN analyst Dan Orlovsky: Browns shouldn't give up on Baker, but he and the team have work to do 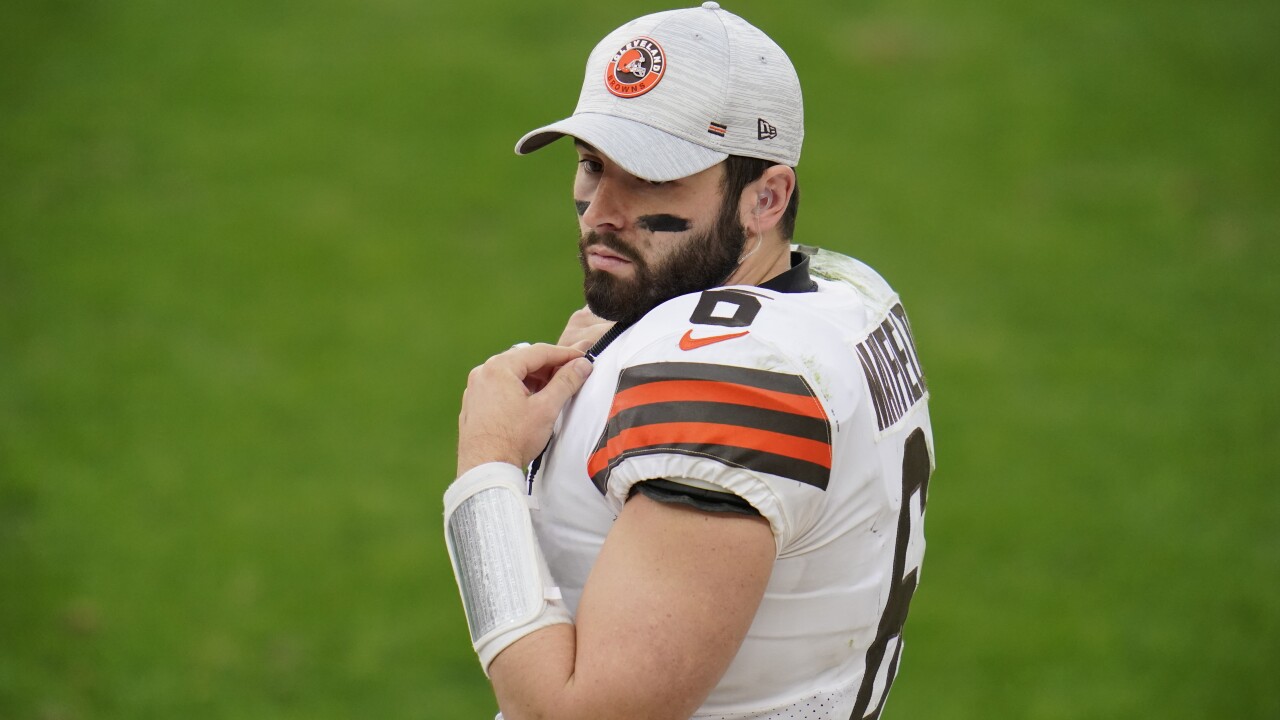 CLEVELAND — Cleveland Browns quarterback Baker Mayfield had a rough time in Pittsburgh during Sunday's 38-7 loss. His less-than-ideal performance drew the ire of fans who are now questioning whether Mayfield is the guy for the job. Former NFL quarterback and current ESPN analyst Dan Orlovsky says now is not the time to panic.

Orlovsky said that while there are clear concerns about Mayfield’s deficiencies, such as adjusting his defensive reads pre-snap versus post-snap, there are ways to improve those issues and for the Browns to remain confident in the player they chose as their franchise quarterback.

What Baker Mayfield can do
When you go back and watch some of the questionable (or downright awful) throws Mayfield has made this season, one thing stands out about almost all of them—his eyes.

The way Mayfield reads the field and reads defenses is great pre-snap, but post-snap, he struggles. Take, for example, the interception thrown to the Steelers’ safety Minkah Fitzpatrick on Sunday.

Orlovsky said that Mayfield’s eyes are his biggest flaw, adding that eyes are something all quarterbacks spend their careers improving, and while no one ever perfects theirs, they can get better.

The first step is making sure Mayfield is seeing the whole field clearly while not trying to focus on any one thing at a time, all while understanding the way a defense moves.

Orlovsky said that Mayfield, if he doesn’t already, has to have a firm grasp on the inner workings of how a defense moves together, comparing it to a dial and how the parts move together when you turn it one way or the other.

The second step is “cutting the fat off plays” to make them very simple. The play-action offense that Mayfield thrives under is good for that, Orlovsky said, but it comes with a downside.

“When you're a play action-based offense, one of the benefits is you don't really need to know the coverage. You're turning your back to the defense. You're making a play fake. It's a progression offense after that—one to two to three,” Orlovsky said. “Cover 1, Cover 2—you've got to find the areas where you're going to throw the football or find the person that you have to see where they are. So: ‘Cover 2 or Cover 3— I don't care—I’ve just got to find the area where I want to throw the ball. Who's the person that could take that away?’ So that's part of the benefit of play-action passing.”

The downside to running play-action is it leaves the quarterback vulnerable to lacking good eye discipline when it comes to post-snap reads, which is what Mayfield has been struggling with.

Orlovsky said that Mayfield could benefit from replicating what he himself saw while playing under Texans head coach Gary Kubiak and behind Matt Schaub in 2009.

“I used to sit in meetings with Gary Kubiak Saturday night before the game," he said. "He would go to Matt Schaub, our starting quarterback, and say, ‘What's your read on stick dragon and Schuab has to be like, 'Alright, if I get two-high safeties, I'm working the stick outside-in, got to be aware of the corner and squat Cover 2 look. Middle field closed, I'm going to work the drag to the slant or the slant to the drag. The only time that I would work the drag right now in a middle-field open defense is if it was Cover 4 and I hated my leverage and I could just outflank a MIKE.'"

“You've got to get to the point as a quarterback where you know that like the backside of your hand, like it's breathing."

A quarterback must have a maniacal obsession with preparation and walk-throughs. He has to consistently think through what he would do in changing defensive situations, and he has to know those changes like he’s the person calling the play.

What Kevin Stefanski can do

Orlovsky believes that Browns head coach Kevin Stefanski has the ability to help improve Mayfield based on his well-rounded coaching background across different positions. What Stefanski needs to focus on, Orlovsky said, is getting Mayfield’s feet into a rhythm.

Orlovsky said Stefanski and his coaching staff can be vigilant about Mayfield’s reads, his knowledge of the playbook and his understanding of the game.

What the fans should expect

Three seasons into his career, it’s clear Mayfield is a far different quarterback than the superstars across the league at the position, but he can grow into a reliable, successful talent.

Four head coaches in three years isn’t going to benefit any quarterback, let alone one with the pressure of being the first-round draft pick coming onto a team that has burned through a catalog of quarterbacks looking for “the one.”

Orlovsky compared Mayfield to Washington Football Team’s quarterback Alex Smith, who has had a solid career built on continuity and noted the slack he got while growing as a player.

“A great correlation is Alex Smith on all the turnover that Alex went through as the first pick in the draft of the 49ers and all the turnover and change that he went through,” Orlovsky said. “‘Oh, Alex Smith sucks. He's never going to be anything, blah, blah, blah.' Well, no, continuity is one of the greatest forms, signs or foreshadowings of success for a young quarterback.”

If Mayfield can be consistent, he can be successful, especially for the Browns, who have added high-grade talent to surround him.

Orlovsky said that, no, Mayfield will not be a Patrick Mahomes or a Lamar Jackson or an Aaron Rodgers, but that doesn’t mean the Browns are doomed.

“The San Francisco 49ers, because of a good football team and a great coaching staff, went to the Super Bowl with a good player at the quarterback position. And so we have kind of gotten into this place, and I kind of get there myself sometimes, that we think the only way to do it is with the absolute superstar talent. There's other ways to do it,” Orlovsky said. “Quarterbacks can be just really good players, and I think Baker Mayfield can still be a really good player with good coaching and good people around him.

“Is he ever going to carry a football team? I can't say that right now. Can he ever be a really important piece on a good team? Yes."

So to the fans ready to give up on Mayfield and restart the search for a franchise quarterback, Orlovsky says this: “It's not time to consider Baker Mayfield as a bust.”

Mayfield has now had just 89 days to work with Stefanski, to mesh with his offensive scheme and to correct the mistakes and bad habits acquired last season. He needs time to improve—time that the team, and the fans, have to give him, Orlovsky said.

“It's not time to move on from him as your starting quarterback. You've got to see him fix the things that are holding him back from growth and development. That's it. And if you see incremental steps, you're encouraged. And if you don't, then the question never leaves.”

RELATED: Don't let ugly loss to Steelers let you lose sight of the fact that the Browns are 4-2