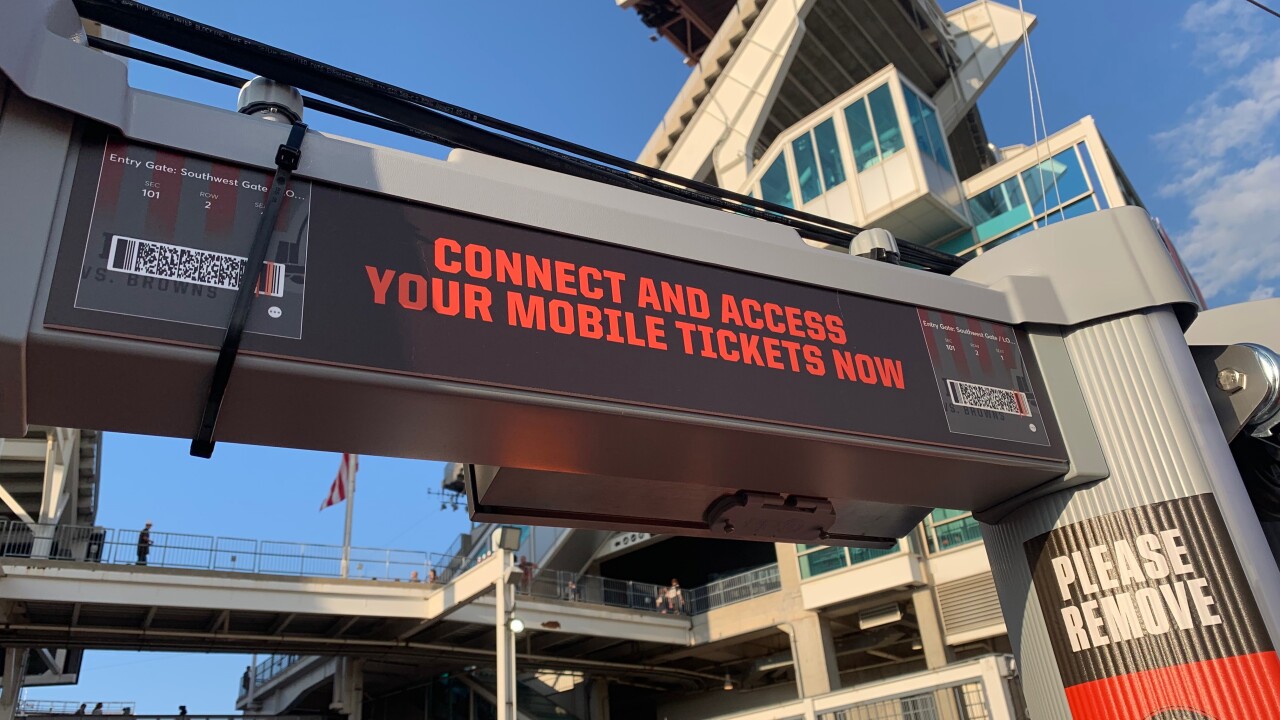 The new policy this season only allows fans to get in using mobile tickets, not hard copy tickets. The Browns said they had multiple people on hand Thursday to help out with any ticket issues that arose.

But for fans whose tickets wouldn’t load, the experience was frustrating.

Steven Fender of Ashtabula came to the game with seven other people, including relatives from out of state. He said he likes mobile tickets, since he’s able to pull up one ticket and swipe through for each person with him. But on Thursday, he had trouble with getting the tickets to work.

“Yeah, it’s not loading right now for some reason,” Fender said. “I have full bars on my phone.”

Fender said he didn’t experience that issue last week at the scrimmage when using mobile tickets.

April Tighe of Medina came to the game with her husband, a season ticketholder, and their son and daughter. For the kids, this Browns game was to be their first. In the past, Tighe said, they had always used paper tickets.

“In reality, it’s a good idea, but you know, right now it’s not, cause we’re trying to get in and it’s still trying to load,” Tighe said of the mobile tickets.

For some fans, the Browns Mobile App didn’t work. The team had asked fans to download the app before coming to the game to have their tickets ready when they got to the gates.

Keri Russell, a season ticketholder, was so frustrated that she broke into tears while on the phone with her mother outside the stadium.

“Kickoff is literally in eight minutes, and it’s my first year with season tickets,” Russell said in an interview with News 5. “They’re just telling me there’s nothing they can do.”

Mobile tickets weren’t a problem for everyone, as plenty of people got through the gates without an issue Sarah Herschbach of Avon Lake said that she generally prefers hard copy tickets, which she likes to collect, but is getting used to mobile ticketing.

“I like it so far,” Herschbach said, noting that her mobile tickets worked with no issues Thursday.

James Evans of South Euclid said he was able to pull up his tickets as he walked toward the stadium, but as he got closer, they wouldn’t work.

Evans, who said he understands the reasoning behind the mobile ticket policies, was eventually able to load his tickets and got into the game.

In previous information from the Browns, the team noted that printable PDF tickets are no longer available for entry at FirstEnergy Stadium or other NFL venues, as the NFL continues transitioning to mobile ticketing for efficiency.

News 5 reached out to the Browns for a statement about the issues Thursday and how they are being handled.

A spokesperson for the team sent the following:

"The overwhelming majority of our fans successfully accessed their mobile tickets and entered the stadium using secure mobile ticketing, while a small percentage did experience delays/difficulties. However, our goal will always be for 100 percent of our fans to have a smooth entry to our facility. As can be expected when incorporating any new technology, our team did note a few areas to address for improvement and we will continue to identify opportunities to ensure the best experience possible for all fans. We will also continue our expansive communications efforts on mobile ticketing as we recognize the significance of educating our fans on the new mobile process. Specifically for mobile ticketing, we deployed a significant number of additional staff members at all major gates and leading up to the stadium to assist fans. If fans experience any difficulty on gameday accessing tickets through the Browns Mobile App, they can seek assistance at the Browns ticket office, located on the south side of FirstEnergy Stadium next to the Browns Pro Shop. One final notable – screenshots will not work as the barcodes are dynamic; if someone tries to do so, their ticket will scan as invalid at the gate."