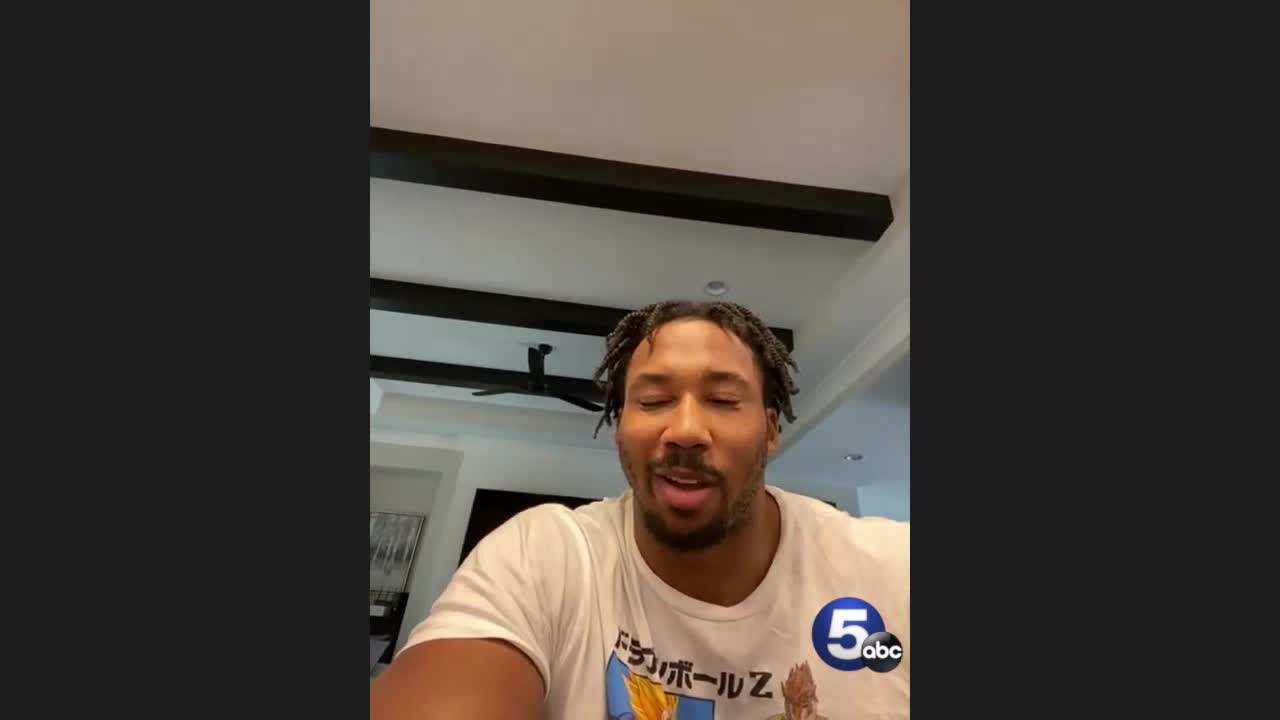 Cleveland Browns star defensive end Myles Garrett was just made the NFL’s highest-paid defensive player with the 5-year, $125 million contract extension signed Wednesday. Garrett said that he knows that now is the time to prove himself. 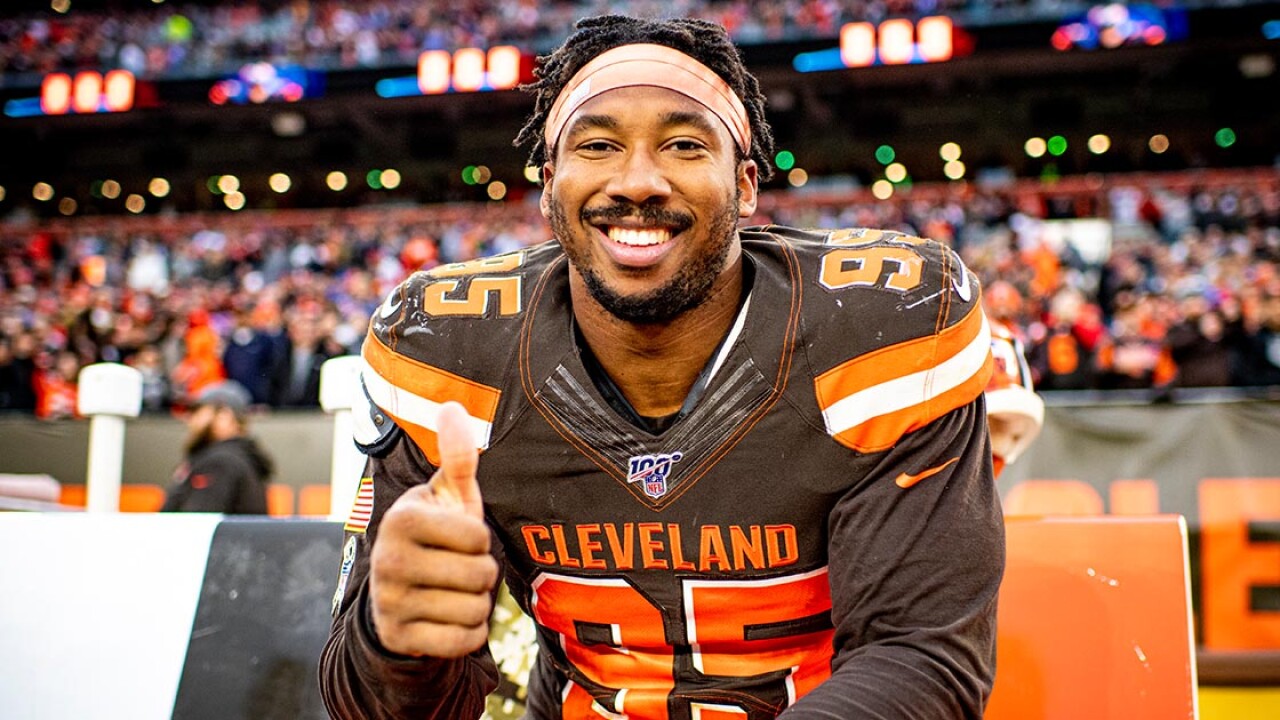 CLEVELAND — Cleveland Browns star defensive end Myles Garrett was just made the NFL’s highest-paid defensive player with a 5-year, $125 million contract extension signed Wednesday. Garrett said that he knows that now is the time to prove himself and show he’s the “top dog,” which for the 6-foot-4, 272-pound defensive end means buckling down and setting goals.

Here’s how Myles Garrett plans to improve his game and in turn, improve the Browns.

1. Be a team leader and find the chemistry to win

Garrett put himself in Defensive Player of the Year conversation -- and we'll have more on that below-- but he has even bigger plans for the season than an individual award.

“This next year I want to ball out and win that award—but I want to take my team to the playoffs and even higher than that,” he said.

Garrett said in order to do that, he and his teammates must build chemistry with each other heading into this season.

“I know it’s kind of hard with COVID and getting in the building so we’ve got to just work with what we’ve got,” he said.

2. Stay motivated and ready to go

Time to get to work

With COVID-19 keeping players from their normal routines headed into the season, Garrett has had to take it upon himself to stay in his best football shape—and he’s done well so far.

Garrett said he was able to have a weight room installed in his house and has room to train the way he’d be able to if he were in the Browns training facility.

“I have room to run, room to do drill and work on bags, movement, hands—I’ve been doing pretty much everything I would be doing if I were in the building except for sitting in a classroom or meeting with guys personally,” Garrett said.

With the addition to his home and the constant workouts, Garrett said he’s been able to get a head start on the season training-wise.

“Everybody’s wondering how I got to where I’m at, with the extension. 'How he’s doing and has he been working out? Has he been slacking? What kind of mindset is he in coming back?' and I just want to prove myself and what I’ve been doing to get ahead of the pack,” he said.

3. Moving past the Steelers incident

Last season, Garrett missed six games after a lengthy suspension as a result of an on-field brawl during the Browns-Steelers game. Garrett asserted afterwards that Steelers quarterback Mason Rudolph called him a racial slur

“My life is much bigger than one moment,” Garrett said. “Me, the Browns and my teammates are going to look past that and go on to greater success and that’ll just be a small bump in the road.”

He said that the negative perceptions around him following that moment are unavoidable and said “that’s just life.” He also said that he’s prepared for a heated match-up on the field this season but won’t let another situation like that one arise again.

“You have one mistake and people are going to come after you. Mine just happened to be on national TV with millions watching,” Garrett said. “Me, I’m just going to keep on playing my game. I’m not going to worry about what people say, what they do. If somebody comes at me I’ll walk away and put my hands up or whatever I have to do to nullify the situation, but, again, it’s just a bump in the road, and I know my teammates will have my back to descale and keep it straight to football.”

Garrett said that he’s moved past the situation and although he hasn’t had any contact with Rudolph or Steelers head coach Mike Tomlin, he holds no ill intent towards either of them.

“I respect Mike Tomlin as a coach and what he’s done in the league has been great for the Steelers and they’ve had success for a long time,” Garrett said. “I hope Mason Rudolph goes on to have success. I have no problem with him going forward so whatever happens happens, if we’re able to talk and deal with things as grown men, that’s fine by me. But I'm just keeping my eyes forward and keep focused on the plan and the goal.”

It’s no secret that the Cleveland Browns have not been considered good for some time. The team has never won a Super Bowl and saw its last championship win in 1964. Even when wide receiver Jarvis Landry was traded to Cleveland in 2018, he was under the impression he was sent to the team “to die.”

Landry has worked hard to change the culture in Cleveland and rewrite the narrative about the Browns, and Garrett has those same goals, especially with his contract extension, a decision that he said was an easy one to make.

“There was no reservations for me because I kind of like that the history is what it is because it will only make it so much sweeter when we turn this thing around, actually start winning big games, winning playoff games and finally get to that last one,” Garrett said. “I’d like to be a part of that. I’d like to lead the pack for that so whenever we do that, whether that starts next year or how many years it takes -- I want to lead Cleveland to that promised land.”

Garrett is the first first-round pick to be re-signed by the Browns since the team agreed to a contract extension with cornerback Joe Haden. Garrett’s monumental contract extension was a big confirmation that the team is taking every measure to reaching one shared goal—developing a winning organization.

5. Becoming the Defensive Player of the Year

Garrett has had his eyes set on the title of Defensive Player of the Year since he entered the league three years ago. He’s been in the conversation but hasn’t added that accolade just yet. This year, he said, will be different.

“I had the chance to solidify myself as (one of the) top two defensive players in the league and hopefully not be considered number two, so I have that to prove next year, and we’ve got to show that this talent can come together to win games,” Garrett said. “I don’t want to be the same player as last year. I want to be better in all aspects.”

If he can achieve his goal, Garrett would be the first Browns player to ever be named Defensive Player of the Year.

Right now, the odds are stacked against him when it comes to sports betting sites, but Garrett is more than capable of having another explosive season and toppling past the names currently at the top of the list, including Aaron Donald, Khalil Mack and Nick Bosa.