Mayfield feeling outside pressure after brutal day at Pitt 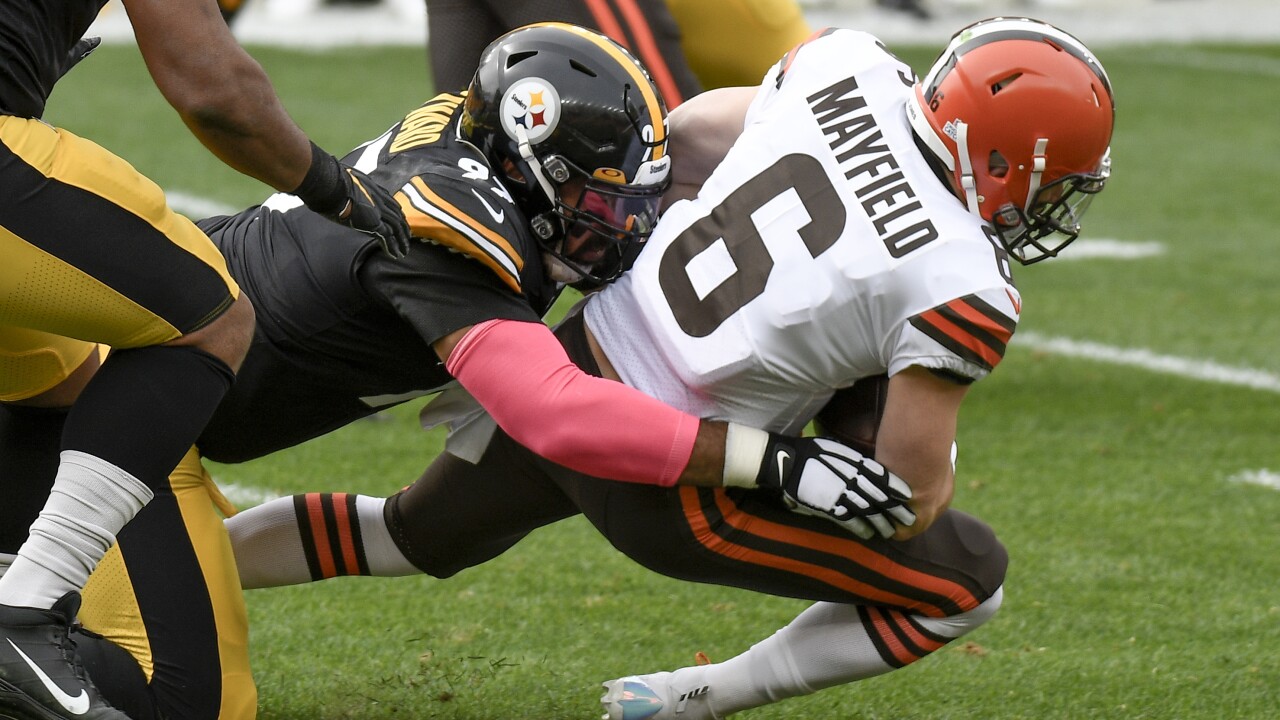 CLEVELAND — Baker Mayfield spent much of Sunday afternoon running from the Pittsburgh Steelers.

On Monday, the critics were after him.

Mayfield’s poor performance — and coach Kevin Stefanski’s decision to pull him early to protect him from further injury — against another strong defense has renewed concerns about the quarterback’s long-term viability in Cleveland.

Playing with sore ribs that limited his practice time last week, Mayfield threw an inexcusable early interception that was returned by Steelers safety Minkah Fitzpatrick for a touchdown and the Browns (4-2) were thrashed 38-7, their 17th straight loss at Heinz Field.

Some things never change in Cleveland.

After throwing two picks and scrambling for survival, Mayfield spent the last quarter watching from the bench. Stefanski didn’t want to expose Mayfield, who was sacked four times and took several hard hits, to any more punishment.

An argument could be made that Stefanski should have made the move earlier.

Mayfield’s second pick of the first half was the result of another poor decision, and it came on the kind of play elite QBs just don’t make. Flushed from the pocket, Mayfield, who finished 10 of 18 for 119 yards, held on to the ball too long before forcing a long pass.

“There are of course plays that he could have done something differently,” Stefanski said. “Our plan was to keep him clean, and we did not do that.”

“There is improvement to be had across the board,” he said. “I have a hard time singling one guy out in a game like yesterday,” he said.

Trouble is, Mayfield has had a few clunkers.

Sandwiched around Cleveland’s four-game winning streak are lopsided losses to Baltimore and Pittsburgh, the AFC North’s measuring sticks. The Browns were outscored 76-13 in those games and Mayfield threw three interceptions.

It’s a troubling pattern for the 2017 No. 1 overall pick, who has been inconsistent in 35 career starts, and sub-par against quality defenses.

In three games against Baltimore, Indianapolis and Pittsburgh, Mayfield completed 52 of 94 passes (55 percent) for 505 yards with five interceptions. Take away an excellent first half against the Colts when he passed for 228 and two TDs, and the stats are more alarming.

Mayfield has shown some growth this season, but there are lingering questions about his ability to throw from the pocket and make good decisions.

For now, there’s no screaming for a quarterback change in Cleveland.

They’re mostly whispers. Every week they seem to get a little louder.

There weren’t many positives Sunday, but Cleveland’s defense did a decent job in holding the Steelers to 277 yards. The biggest issue was that the Browns offense converted just 1 of 12 third-down conversions and ran for only 75 yards — 113 below their average.

“We have to play better,” said right tackle Jack Conklin. “We had to come out and set the tone, and we never really got in a rhythm, and that is on us. When he can’t get it out to our playmakers and let them do what they can do, it immediately falls on us.”

Tight end Austin Hooper is becoming Mayfield’s go-to guy. He had five catches for 52 yards against the Steelers, his fourth straight game with at least five receptions.

Beckham’s sideline antics — throwing his helmet, taking off his cleats, engaging with fans — isn’t a good look and only fuels unnecessary speculation. It’s laudable he cares about winning, but there are better ways to express frustration than always playing up to the TV cameras.

Stefanski said Mayfield should be able to practice more this week after being hindered by a rib injury sustained a week earlier against the Colts. Stefanski didn’t second-guess his decision to start Mayfield.

“It’s a fair question, but he was cleared,” Stefanski said. “He was obviously sore throughout the week but got better.”

Zero and zero — The Browns’ defense didn’t force a single turnover after coming in tied for the league lead with 12 takeaways. Also, Cleveland was 0 for 3 on fourth down.

The Browns are in the same situation as they were in Week 2 — the Bengals are next. Cleveland followed its opening-game debacle in Baltimore by beating Cincinnati 35-30 in rookie quarterback Joe Burrow’s first road game. He attempted 61 passes and threw three TDs.