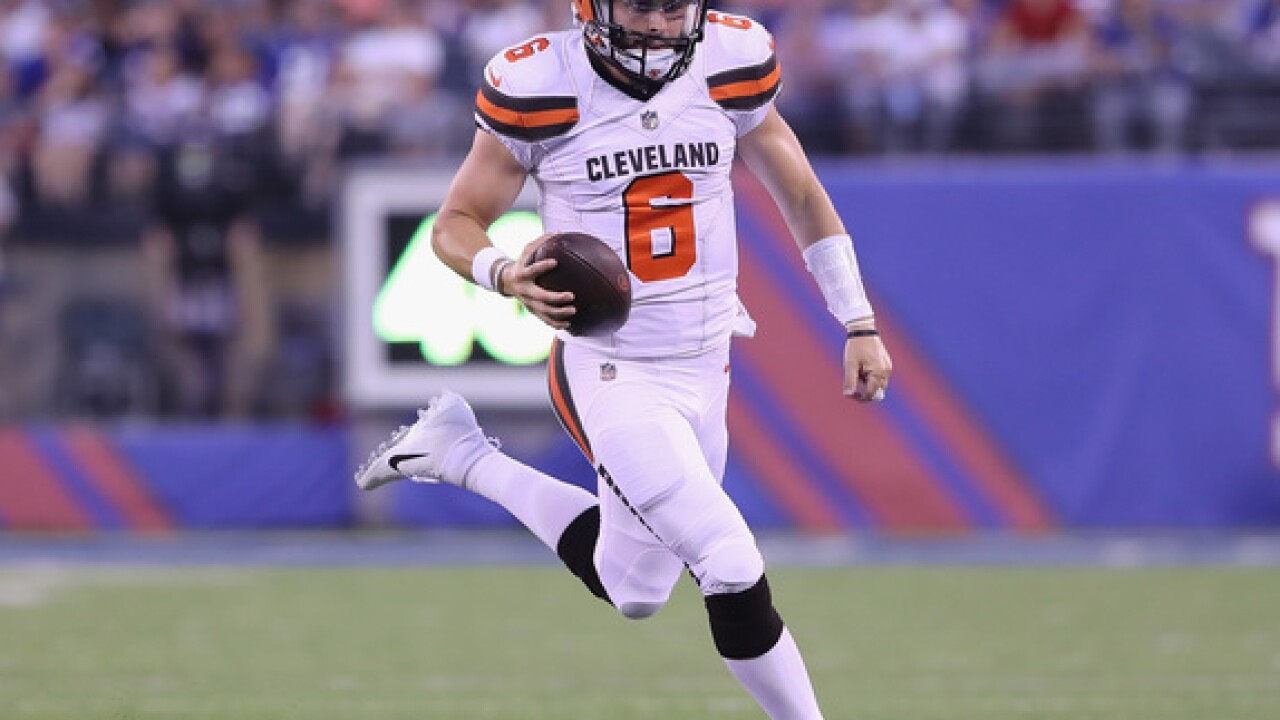 Copyright 2018 Scripps Media, Inc. All rights reserved. This material may not be published, broadcast, rewritten, or redistributed.
Elsa
<p>EAST RUTHERFORD, NJ - AUGUST 09: Baker Mayfield #6 of the Cleveland Browns carries the ball in the second quarter against the New York Giants during their preseason game on August 9,2018 at MetLife Stadium in East Rutherford, New Jersey. (Photo by Elsa/Getty Images)</p>

Baker Mayfield and Saquon Barkley lived up to early expectations as the top two picks in the NFL draft in their first action as the Cleveland Browns beat the New York Giants 20-10 on Thursday night.

Replacing starting quarterback Tyrod Taylor late in the first quarter, Mayfield hit 11 of 20 passes for 212 yards, two touchdowns, and converted two fourth-down plays with his feet. The Heisman Trophy winner who was the No. 1 overall pick found tight end David Njoku on a 10-yard TD pass to cap a 14-play, 72-yard drive on his second series. He finished his debut with a completion on a 54-yard slant and run to fellow rookie Antonio Callaway.

Taylor, expected to be coach Hue Jackson's starter as Mayfield learns this season, hit all five of his passes in two series, including a 36-yard touchdown pass to Njoku, a New Jersey native.

Barkley, the No. 2 pick, electrified the fans at MetLife Stadium, taking a handoff from Eli Manning on the opening play from scrimmage and turning no apparent hole into a 39-yard run down the sideline in front of the Giants' bench. It set up a 42-yard field goal by Aldrick Rosas.

The Penn State running back finished with 43 yards on five carries.

Jalen Simmons scored on 5-yard third-quarter run for the Giants' other score. It came three plays after C.J. Board fumbled a punt return and Zak DeOssie recovered at the Browns 16.

Manning played two series and hit 4 of 7 passes for 26 yards. Star receiver Odell Beckham Jr., returning from major ankle surgery, dressed but was held out by new coach Pat Shurmur, who is trying to rebuild the Giants after a 3-13 season.

CALLAWAY: The troubled fourth-round pick played despite being cited for marijuana possession and driving with a suspended license. Police also found bullets and a gun part in his car this week. He had three catches for 87 yards, including a diving 24-yarder that the Browns successfully challenged after it was ruled incomplete on the field.

NATIONAL ANTHEM: There were no demonstrations. Giants DE Olivier Vernon and S Michael Thomas, who both knelt during the anthem last season, each stood.