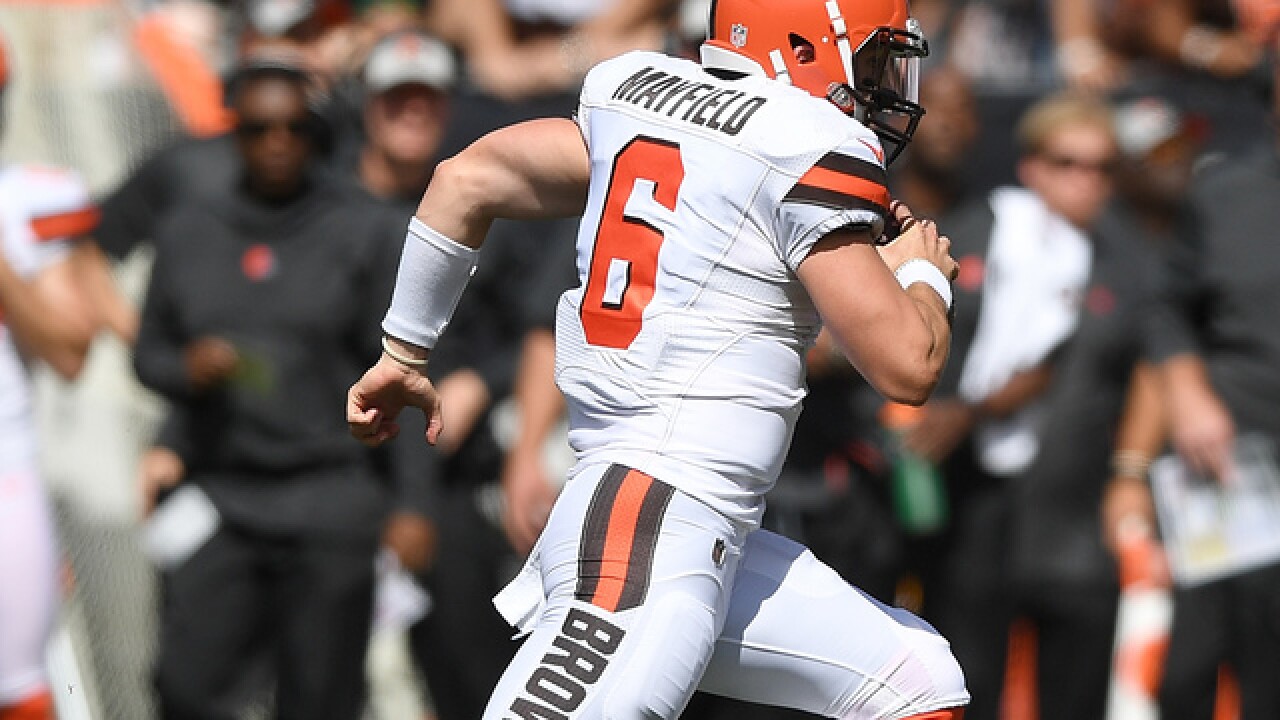 Baker Mayfield spun out of sacks and turned them into big plays, led Cleveland to its highest-scoring game in more than a decade and showed why the Browns thought highly enough of him to make him the No. 1 overall pick in the NFL draft.

Mayfield’s first NFL start would have gone down as a major success if not for some untimely turnovers and a replay review that allowed the Oakland Raiders to rally for the late tying score before winning in overtime.

Instead, it ended up like so many other games for the hapless Browns since they returned to the NFL in 1999.

Mayfield threw for 295 yards and two touchdowns, but also committed four turnovers that helped the Raiders deny the Browns their first back-to-back wins in four years with a 45-42 overtime victory on Sunday.

“We turned the ball over too many times, gave them a chance,” Mayfield said. “In this league, when you turn the ball over like we did today, like I did, you’re not going to win those games. We saw the end result of that.”

Mayfield put the Browns (1-2-1) in an early hole when his pass on the second drive of the game deflected off receiver Antonio Callaway’s hands and went right to Gareon Conley , who returned the interception 36 yards for a touchdown.

Then he showed the big-play ability that helped him win the Heisman Trophy at Oklahoma, become the No. 1 pick and convince the Browns to put him in far earlier in the season than originally planned.

He got his first career TD on a 49-yard pass to Darren Fells in the second quarter and put Cleveland up 28-14 with a 2-yard strike to Jarvis Landry in the third.

But then Mayfield got stripped on a sack by Maurice Hurst and fumbled a snap from JC Tretter to set up two short TD drives for the Raiders, who then built a 34-28 lead early in the fourth quarter.

“He’s going to learn,” coach Hue Jackson said. “He’s got football intelligence. Today, as he goes through it, he’ll understand, and we’ve talked about it a little bit, just how important those things are. You got to be team-protecting in certain situations, but you don’t want to rein him in, because I like the things he’s doing.”

Mayfield then showed his resiliency, connecting on a 49-yard pass to Callaway that set up Carlos Hyde’s go-ahead 1-yard run. Nick Chubb added a 41-yard TD run and Mayfield seemed poised to become just the third of 30 Browns starting QBs to win his first start with the franchise since 1999 when the defense stopped the Raiders at the 9 with less than two minutes left.

Hyde appeared to seal the game with a third-down conversion only to have it overturned on replay when the officials ruled his elbow touched the ground before he reached the marker.

“It had to be a heck of a review to turn that over on the third and short,” Mayfield said. “I don’t know. Any time you put it in somebody else’s hands, it’s not always going to turn out your way. You’ve got to control what you can control and execute better.”

That forced a punt and Derek Carr led the Raiders on a game-tying drive.

Mayfield got the ball back at the 25 and completed two quick passes to move the ball into Oakland territory before his deep pass was intercepted by Reggie Nelson with 7 seconds left, forcing overtime.

Mayfield got one drive in OT, but threw an incomplete pass on third down and never got another chance. He was unable to back up his comeback win in relief against the Jets that snapped Cleveland’s 19-game winless streak last week with another victory.

“I feel bad for our defense,” Mayfield said. “We gave the Raiders a chance to be on offense too many times. When you give an offense like that, with the players they have, so many chances, it’s not going to turn out well for you.”

Despite the loss, there’s plenty of reason for optimism around the Browns, who believe the two-decade search for a quarterback has finally ended.

“I love Mayfield,” Raiders coach Jon Gruden said. “The way he plays, the confidence that he has. He got out of trouble and made some unbelievable throws under fire today. He has a bright future. Cleveland has their quarterback. They’ve been complaining about not having one for a while. It’s pretty obvious they have one.”