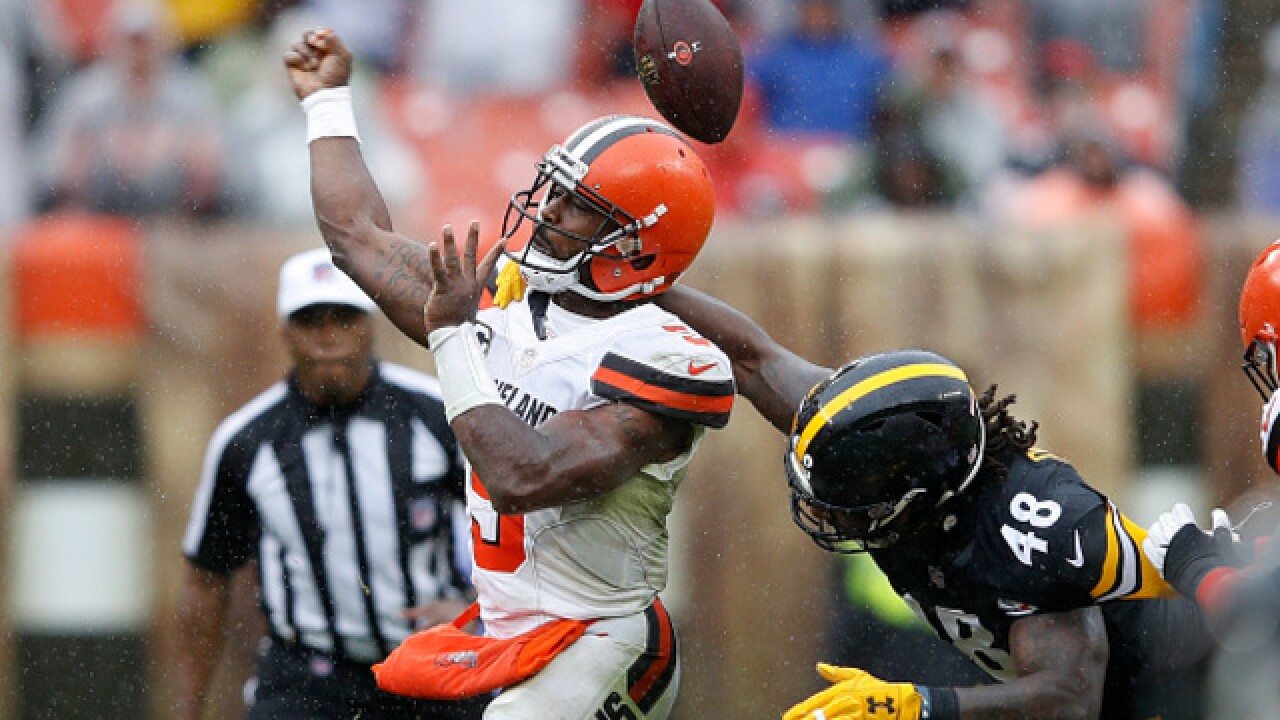 Image copyright 2018 Getty Images. All rights reserved. This material may not be published, broadcast, rewritten, or redistributed.
Joe Robbins
<p>CLEVELAND, OH - SEPTEMBER 09: Bud Dupree #48 of the Pittsburgh Steelers breaks up a pass by Tyrod Taylor #5 of the Cleveland Browns during the second quarter at FirstEnergy Stadium on September 9, 2018 in Cleveland, Ohio. (Photo by Joe Robbins/Getty Images)</p>

When the ball deflected off T.J. Watt’s left hand and fluttered to a water-logged landing, well short of the crossbar, there was nothing more the Browns could do.

Their 17-game losing streak was over. Without a win — or a loss. Nothing to celebrate.

Cleveland didn’t take advantage of forcing six turnovers by Pittsburgh and missed a chance at its first win since 2016 on Sunday, tying the Steelers 21-21 in overtime in a game that turned into another emotional roller-coaster for fans who were so close to seeing their team go 1-0 for the first time in 14 years.

“Tying in the NFL is really weird,” left guard Joel Bitonio said. “I never even thought I would be a part of it.”
Bitonio could have never imagined playing on an 0-16 team, either, but that’s what happened last season when the Browns went through their entire schedule without posting a win. At least that can’t happen again.

Watt capped a brilliant performance by blocking Zane Gonzalez’s 43-yard field-goal try with 9 seconds left to preserve the tie for the Steelers, whose drama-filled week around Le’Veon Bell ended with more theatrics.

It was the league’s first Week 1 tie since 1971, and the first time in 133 games the Browns and Steelers couldn’t settle their rivalry on the field.

The Browns rallied from a 21-7 deficit in the fourth quarter to stun the Steelers, who blew their own chance to win it in OT when Chris Boswell’s 42-yard field goal attempt sailed wide left.

Pittsburgh was without Bell, whose contract holdout will carry into the season’s second week. But the Steelers, who sacked Taylor seven times, refused to offer any excuses after falling dangerously close to becoming the first team to lose to the Browns in Week 1 since 2004.

“Hell yeah, it feels like a loss,” Steelers defensive tackle Cam Heyward said. “I’m sorry for using that kind of language, but if we settle for those, we’re going to be an awfully (steamed) off bunch. We didn’t get the job done. I credit T.J. for getting that block, but the outcome was already decided. It just gives you a sick taste in your mouth.”

Here are some other takeaways from the league’s first tie in two seasons:

Steelers quarterback Ben Roethlisberger hardly looked like a future Hall of Famer, throwing three interceptions in the first half and losing two fumbles. He made some uncharacteristic errors, forcing a pass into double-coverage that was picked off by Browns rookie cornerback Denzel Ward, who had two interceptions in his pro debut.

Roethlisberger passed for 335 yards, but he was upset Pittsburgh’s offense couldn’t put away the Browns.
“It’s just frustrating that we can’t make the plays down the stretch,” he said. “We just didn’t make them.”

“I think he is going to have a great year,” Browns coach Hue Jackson said. “He is showing that he was worthy of being the first player drafted a year ago. A healthy Myles Garrett means a ton to this organization and football team. He just has to do it week in and week out and be this player every week.”

The Browns were last in the league with just 17 takeaways last season.

Watt already had four sacks and 11 tackles when the made the game’s defining play.

“When it snapped, I’m just trying to do my job and get penetration,” Watt said of his game-saving block. “I threw my hand up at the last minute, and it hit my hand — tie game.”

With the Browns trailing 21-14, Gordon leaped and snagged Taylor’s 17-yard pass over Steelers cornerback Cameron Sutton for a touchdown with 1:58 left in regulation.

It was another positive for Gordon, who missed most of training camp to address health issues and was playing in his first season opener since 2012 because of drug and alcohol addictions. Gordon has also been battling a hamstring issue.

Harrison, who moved into the starting lineup this week, was penalized for two false starts in the first half and had some other assignment issues.

Harrison wasn’t the only offending Cleveland player as the Browns were called for 11 penalties for 87 yards.

“Disappointed,” Jackson said of the infractions. “Our team has got to get better. It is not good enough. You take the turnovers, and the penalties that we had and our inability to do some things early offensively, those are huge keys to a tie game. We have to do some things better.”