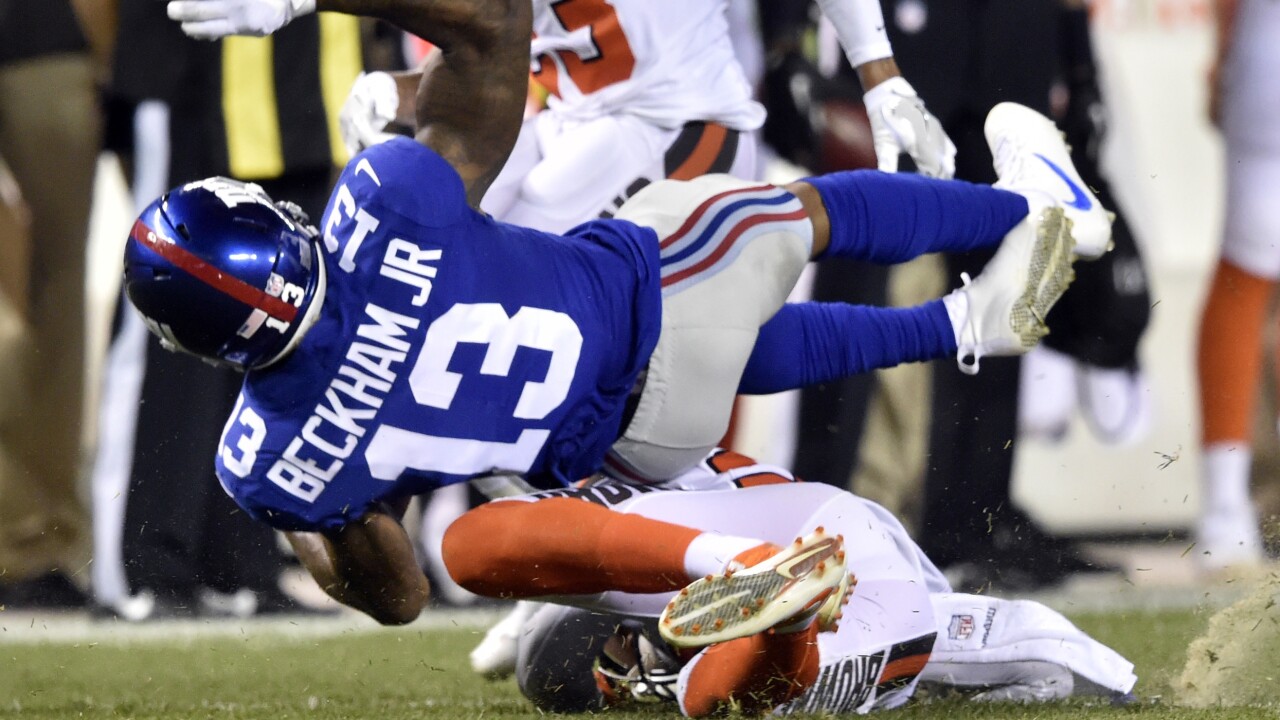 David Richard/AP
FILE - In this Aug. 21, 2017, file photo, New York Giants wide receiver Odell Beckham (13) is tackled by Cleveland Browns strong safety Briean Boddy-Calhoun in the first half of an NFL preseason football game in Cleveland. Odell Beckham Jr. says former Browns defensive coordinator Gregg Williams instructed his players to "take me out" of a preseason game in 2017. The Pro Bowl wide receiver sustained an ankle injury when Cleveland's Briean Boddy-Calhoun cut his legs out while he was with the New York Giants. Beckham said current Cleveland players told him that Williams instructed them to "take me out of the game, and it's preseason." (AP Photo/David Richard, File)

Beckham, who was with the New York Giants in 2017, said he’s been told by current Cleveland players that Williams instructed them to hurt him. Williams was the Browns’ interim coach last season and is now the Jets’ defensive coordinator.

In that game, Beckham suffered a severe ankle sprain when former Browns cornerback Briean Boddy-Calhoun dived at his legs.

“It’s like a known rule, in preseason nobody in the NFL’s really out to do stuff like that,” Beckham said Thursday. “I had players on this team telling me that that’s what he was telling them to do, take me out of the game, and it’s preseason. So you just know who he is. That’s the man calling the plays.”

Beckham initially bought up Williams’ tactics unprompted when he was asked what defense he might face Monday night when the Browns face the Jets.

“The only thing I’m buying is you know probably just got to watch out for the cheap shots and the dirty hits and all the things that he likes to teach,” Beckham said. “That’s pretty much all we’ve got to watch out for. Other than that, I expect the same.”

Williams was suspended by the NFL for one season for his role in the infamous “Bountygate” scandal in which the New Orleans Saints were found to have operated a bounty system where players were paid bonuses for hard hits and deliberately injuring players.

Beckham broke his ankle following the sprain, and said doctors told him the injuries were connected.

“I came back probably three weeks too early just because they lost the first game of the season and I felt that pressure to be able to come out there and do what I can to help the team, so I just came back too early,” he said. “I probably would’ve blown my knee in that preseason game if I couldn’t have gotten my foot out the ground, and that high ankle sprain led to the broken ankle on the left and then which led to compensation in many different areas and just kind of like a little spiral, so it’s something that I’ll never forget.

“It’s something that it changed my life forever.”

One of the league’s most animated assistants, Williams led the Browns to a 5-3 record last season after taking over when Hue Jackson was fired. He interviewed for Cleveland’s coaching vacancy but Freddie Kitchens got the job.