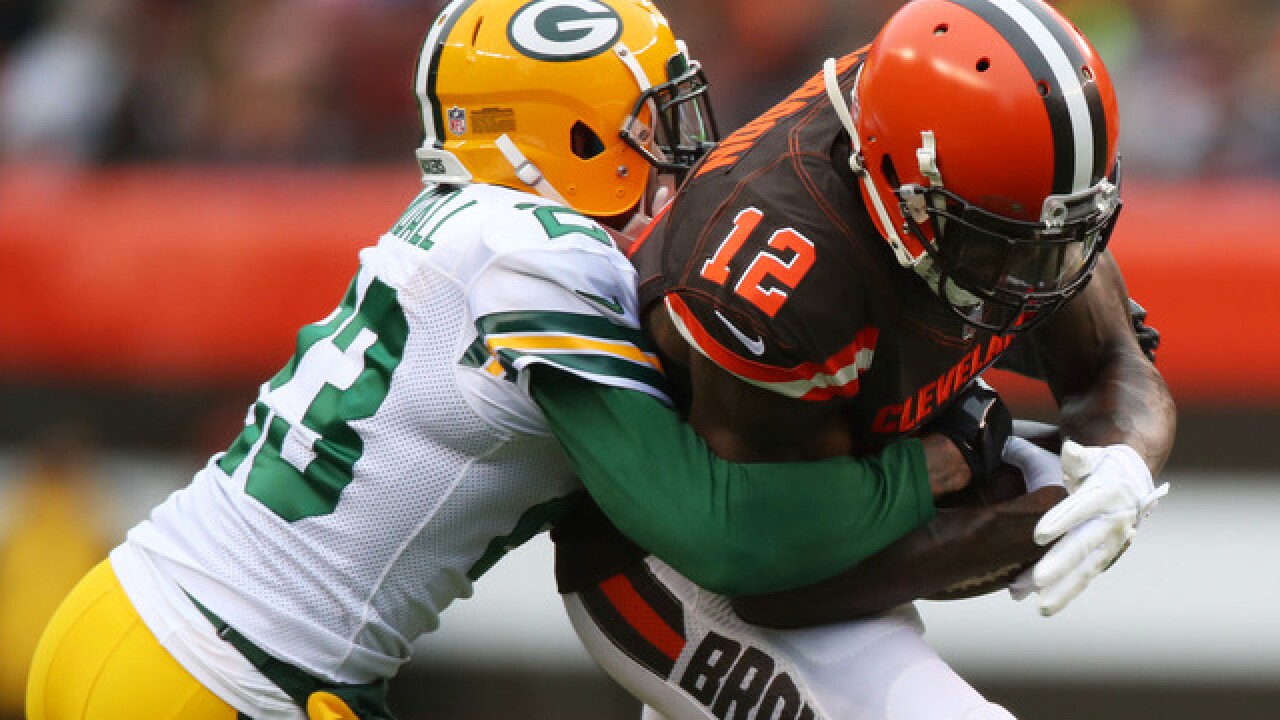 Copyright 2018 Scripps Media, Inc. All rights reserved. This material may not be published, broadcast, rewritten, or redistributed.
Gregory Shamus
CLEVELAND, OH - DECEMBER 10: Damarious Randall #23 of the Green Bay Packers tackles Josh Gordon #12 of the Cleveland Browns in the second quarter at FirstEnergy Stadium on December 10, 2017 in Cleveland, Ohio. (Photo by Gregory Shamus/Getty Images)

The Green Bay Packers came back to set the stage for Aaron Rodgers’ comeback.

Brett Hundley threw a 25-yard touchdown pass to Davante Adams in overtime as the Packers rallied from a two-touchdown deficit in the fourth quarter for a 27-21 win on Sunday over the Cleveland Browns, who remain winless.

Cleveland fell to 0-13 and made too many crucial mistakes to break into the win column.

On third-and-6, Hundley threw a short pass to Adams, who broke a tackle and went in untouched with 5:05 left as the Packers (7-6) won in overtime for the second straight week — and third time this season. The Packers have stayed alive in the playoff race without Rodgers, who has been out since Oct. 15 with a broken collarbone but is expected to play next Sunday.

It was another devastating loss for the Browns (0-13). Green Bay’s TD came after safety Josh Jones intercepted Browns rookie DeShone Kizer, who inexplicably threw the ball up for grabs while being pressured by Clay Matthews.

Down 21-14 heading into the fourth period, the Packers, who beat Tampa Bay last week in overtime, rallied on Hundley’s 1-yard TD pass to Adams with 17 seconds left in regulation. A 65-yard punt return by Trevor Davis set up Green Bay’s score, which came after Hundley was ruled down inside the 1 after an apparent 6-yard scoring run. Out of timeouts, coach Mike McCarthy elected not to risk a run and Hundley rifled his pass into the corner for Adams, who beat Jason McCourty on the play.

Hundley’s tight spiral was reminiscent of so many thrown by Rodgers, who practiced in pads this week and can now come back and finish a season that took a dramatic turn when he was slammed to the turf seven weeks ago.

Hundley finished 35 of 46 with three touchdowns and made the big plays when he had to against the lowly Browns.

Cleveland was in position to run out the clock before overtime but rookie tight end David Njoku dropped a key third-down pass. Cleveland’s punt team couldn’t bring down Davis, who weaved his way to the Browns 25.

Kizer threw three touchdown passes, one to Josh Gordon, and went 20 of 28 for 214 yards. But he’ll be haunted by the late pick, rolling to his left and trying to throw against his body while Matthews closed in.

For the second year in a row, the Browns are three losses from joining the 2008 Detroit Lions as the only teams to go 0-16. Cleveland was 0-14 last year before beating the Chargers on Christmas Eve. Cleveland’s heartbreaking loss closed a turbulent week: The team fired Sashi Brown, its top front office executive, and owner Jimmy Haslam said coach Hue Jackson will return next season.

Isaiah Crowell rushed for 121 yards on 19 carries. Gordon, playing his first home game since Dec. 14, 2014, had three catches for 69 yards and caught an 18-yard TD pass in the first quarter that he celebrated by putting on sunglasses.