The future is here (for one game, at least): Baker Mayfield will start tonight against the Lions 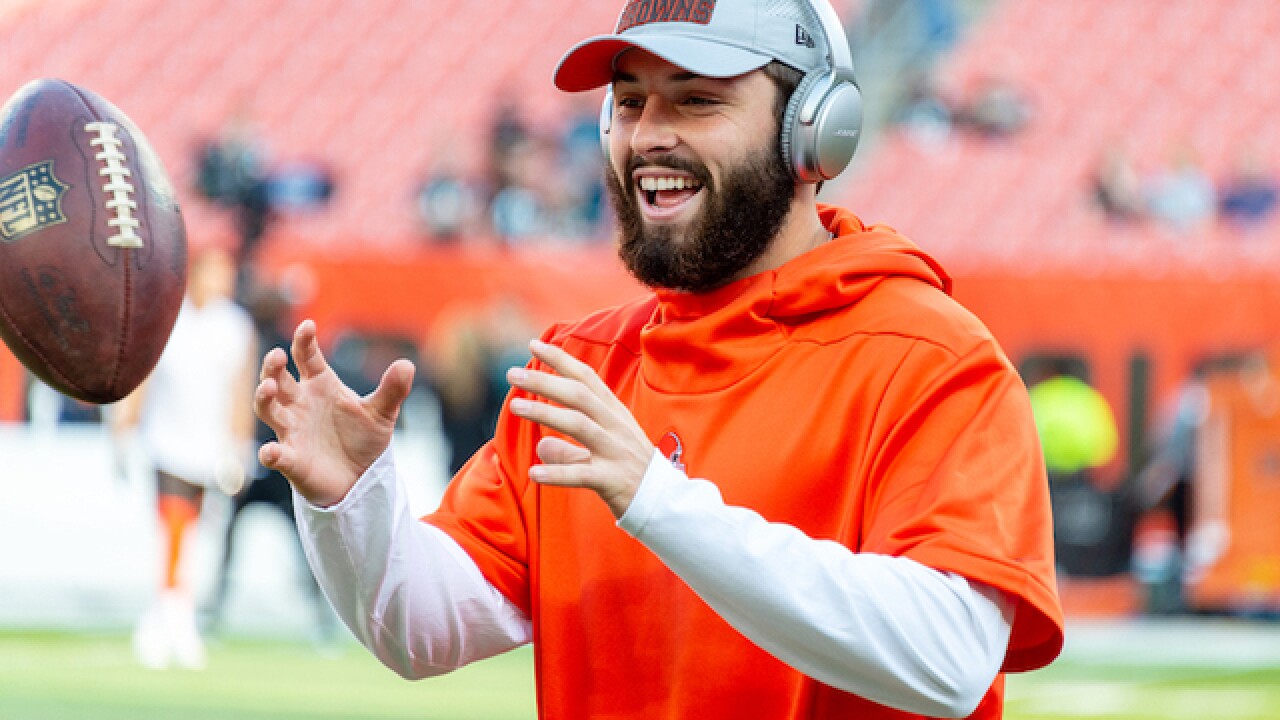 Copyright 2018 Scripps Media, Inc. All rights reserved. This material may not be published, broadcast, rewritten, or redistributed.
Jason Miller
CLEVELAND, OH - AUGUST 23: Quarterback Baker Mayfield #6 of the Cleveland Browns warms up prior to a preseason game at FirstEnergy Stadium on August 23, 2018 in Cleveland, Ohio. (Photo by Jason Miller/Getty Images)

Baker Mayfield will start for the Browns and then stop — maybe for a while.

The top overall pick — and Cleveland’s quarterback of the future — will make his first NFL start and play as much as a half on Thursday night when the Browns visit the Detroit Lions (watch on News 5 Cleveland at 7 p.m.) in an exhibition that will feature backups as well as third- and fourth-stringers fighting for precious roster spots before this weekend’s cuts.

Mayfield’s current job as the Browns’ No. 2 QB behind Tyrod Taylor is secure, but the Heisman Trophy winner is looking forward to a chance to make an another positive impression.

“I’m very ready,” Mayfield said. “It’s another opportunity for me. I’ve been saying it over and over again, I need to take advantage of my opportunities and this is a great one to come out and show what I can do from the get-go, set the tone not just for the offense but for the whole team.”

Not wanting to risk injury, Browns coach Hue Jackson is resting his starters against the Lions so his team is as healthy as possible for the Sept. 9 season opener against Pittsburgh. Taylor is already banged up after dislocating his pinky and bruising his left (non-throwing) hand last week against Philadelphia and Jackson isn’t going to take any unnecessary chances.

“The best team that we’re going to have for the 2018 season is going to be the team that we’ll trot out against Pittsburgh,” Jackson said.

As for Mayfield, the former Oklahoma star will get significant time to tune up for the season. Mayfield has been everything the Browns could have hoped for when they chose him first from a quarterback class that included Sam Darnold, Josh Allen and Josh Rosen, all of whom could start regular-season games before Mayfield.

The Browns have mapped out a strategy to bring Mayfield along slowly and are committed to playing Taylor — this season. Obviously, things could change if there’s an injury and the Browns were reminded of the brittleness of their preconceived approach when Taylor went down against the Super Bowl champion Eagles and Jackson was forced to turn to Mayfield.

But as he has done throughout training camp and preseason, the rookie showed he could be counted on in a pinch. Mayfield didn’t do anything spectacular, but he managed the game, didn’t make any major mistakes and wasn’t rattled.

“You do not want those things to happen, but at the same time, it was good for me to see that,” Jackson said. “To watch him and say, ‘You are up. It is time to go.’ He did not blink. He was like, ‘OK, let’s go.’ I know that he was disappointed in himself — that is just him — with what he did in the game. I thought that he did some really good things. I feel good about that as we head into the season.”

Mayfield was down on himself following the game, saying he could have made quicker decisions and better reads. But he’s got this week to work on those and others aspects of his game. And he’s not letting the fact that it could be some time before he’s starting again affect his preparation or performance.

“I always put 100 percent in every opportunity I get so I’m going to treat this one the same as I would any other,” he said. “Because if I went into it with that mindset that this is my last time, I might try to do something different than just my job so I need to settle in and just do my job.”

RELATED: How to watch the Browns' preseason game against the Lions