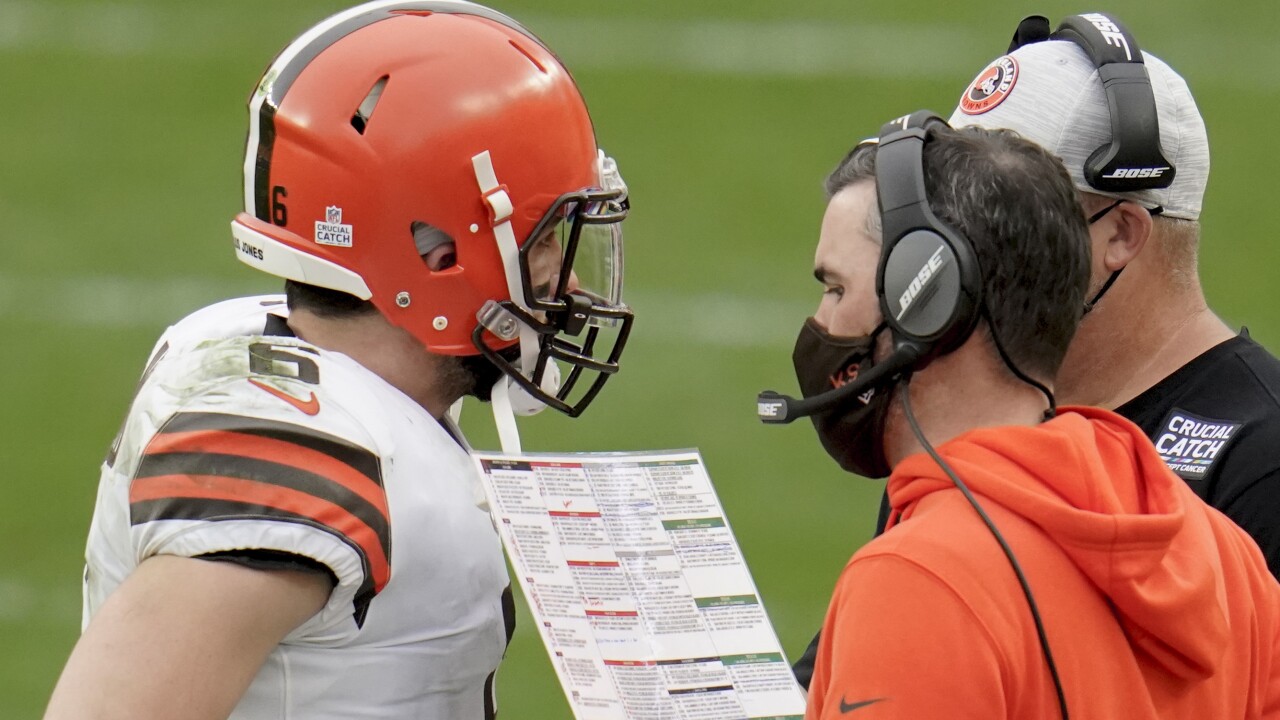 COLUMBUS — The Bengals keep insisting they are better than their dismal record. The Browns’ crash in Pittsburgh last week showed they might not be as good as they thought.

The rematch of the AFC North rivals on Sunday in Cincinnati could provide more clarity.

The Browns (4-2) are smarting after a 38-7 pummeling by the Steelers. Quarterback Baker Mayfield, the first overall draft pick in 2018, has sore ribs and faced another barrage of criticism from all sides this week that he can’t rise to the occasion in big games.

Meanwhile, the Bengals (1-4-1) let another close one get away, losing to Indianapolis 31-27 as rookie quarterback Joe Burrow, the first overall pick this year, turned in another gutsy performance that just wasn’t enough. He threw an interception with 46 seconds left in the game as Cincinnati was driving for what could have been the go-ahead score.

“We’re not panicking,” Burrow said this week. “We could easily be 4-2 right now. One or two plays made in each of these games and we’re right in the playoff hunt. We know how close we are.”

Both teams desperately need a win in the Battle of Ohio for their confidence. In their first meeting in Week 2, the Browns won 35-30 as Burrow attempted 61 passes — the second most by a rookie in NFL history— completing 37 for 316 yards and three touchdowns.

Without a doubt Burrow has gotten more comfortable with the pro game since then, although his offensive line and Cincinnati’s injury-plagued defense have been lacking.

The Pittsburgh debacle left Mayfield, recognized more for his national TV commercials than dependable play, aching and watching the fourth quarter from the sideline while mercurial receiver Odell Beckham Jr. threw a temper tantrum. Mayfield was sacked four times and intercepted twice in the game.

Mayfield’s shaky performances in the last two games — four interceptions in five quarters — has generated a lot of outside noise. But the Browns are rallying around the 25-year-old, who is 16-19 as a starter and playing for his fourth head coach in three years. “This is not about any one person, center JC Tretter said. ”We all have to play better and raise our level.” Said Beckham: “I have Baker’s back.”

“I don’t give a damn what (the critics) say,” Mayfield said. “It is within this building. We know we can do better.

CLOSE BUT NOT ENOUGH

The Bengals have gotten agonizingly close to winning, only to be done in by their inability to shut the door. Last Sunday they led 21-0 in the second quarter but allowed Philip Rivers and the Colts to rally. In Week 3, Cincinnati had to settle for a tie with the Philadelphia Eagles after giving up a late touchdown. And three of the other four losses were by a combined 12 points.

Even without injured Pro Bowl running back Nick Chubb, the Browns have stayed atop the league in rushing yardage. Cleveland’s averaging 169.5 yards per game, and unless the Bengals have plugged some holes since the team’s first meeting, that number could rise.

The Browns rushed for 215 yards in their win last month over Cincinnati, and fullback Andy Janovich bragged they could have gotten “300 or 400, if we wanted.” Kareem Hunt picked up 86 yards on 10 carries against the Bengals last time, and he figures to get a heavy workload this time with Chubb still recovering from a sprained knee.

Veteran sack specialists Geno Atkins and Carlos Dunlap have expressed displeasure over their reduced roles in the Bengals’ defense. The 32-year-old Atkins missed the first four games of the season with a shoulder injury. Although he’s back, his playing time has been limited.

The 31-year-old Dunlap was dropped from the starting lineup earlier this season and publicly criticized coaches. Both are seeing fewer snaps even as the personnel on Cincinnati’s defensive front keeps changing because of injuries.