After a 2-year wait, Haskins takes control at Ohio State 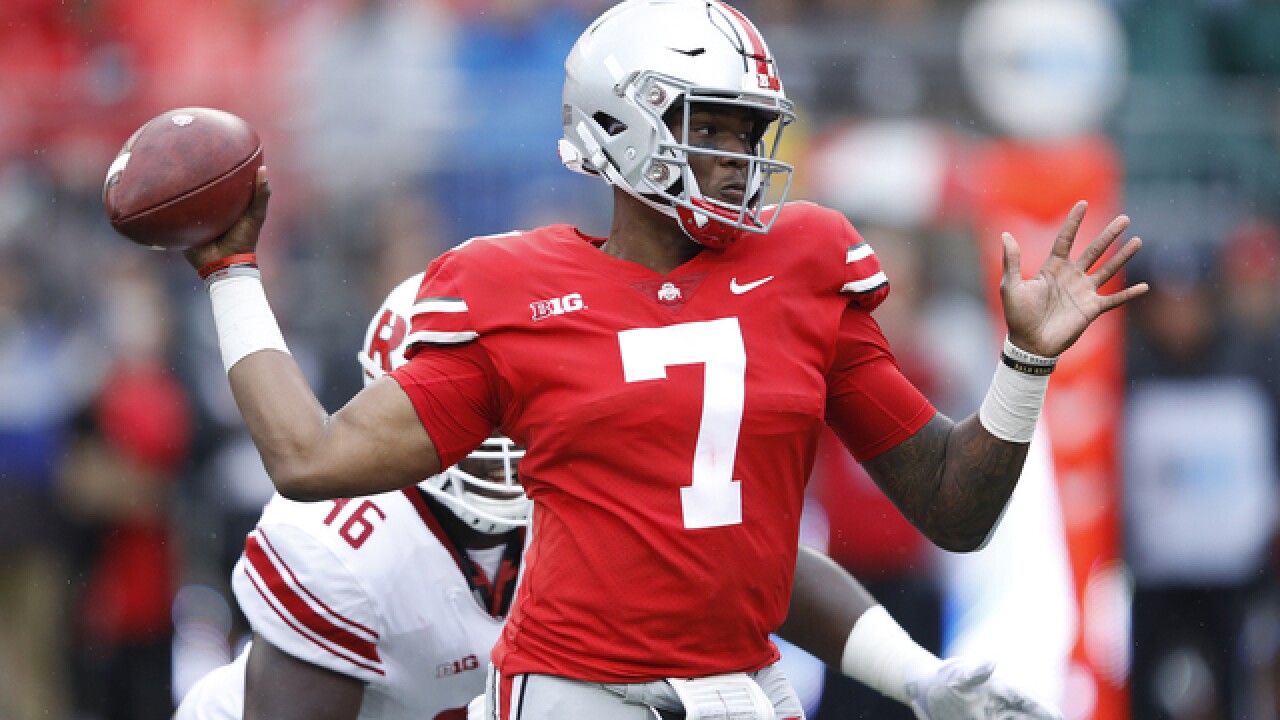 Copyright 2018 Scripps Media, Inc. All rights reserved. This material may not be published, broadcast, rewritten, or redistributed.
Joe Robbins
<p>COLUMBUS, OH - SEPTEMBER 08: Dwayne Haskins #7 of the Ohio State Buckeyes throws a pass in the second quarter of the game against the Rutgers Scarlet Knights at Ohio Stadium on September 8, 2018 in Columbus, Ohio. (Photo by Joe Robbins/Getty Images)</p>

Urban Meyer is known to deal in some hyperbole when he's impressed. And the Ohio State coach was piling it on Dwayne Haskins Jr. before the young quarterback ever arrived on campus.

Meyer raved that Haskins — from the private Bullis School in Potomac, Md. — was fundamentally the best prep quarterback he'd ever seen. "His release, his footwork his bounce in the pocket, his ability to get out of trouble, and his arm strength and size are absolutely ideal," Meyer told ESPN on signing day 2016.

Haskins is living up to Meyer's hype so far.

A sturdy, pro-style quarterback with a mighty right arm, Haskins threw five touchdown passes in his debut and four more last week. He's already 42 of 56 for 546 yards with just one interception in limited action — limited because both his games were blowouts and the backups mopped up.

The 21-year-old Haskins has been waiting in the wings while at Ohio State, flipping to the Buckeyes after committing early to Maryland. After a redshirt year and then sitting as backup to J.T. Barrett last season, he's getting his chance to run the Ohio State offense as the undisputed starter.

Haskins already claimed his place in Ohio State lore last season by entering the Michigan game for an injured Barrett and leading the Buckeyes to a come-from-behind win. After Barrett's departure, Haskins battled Joe Burrow, a former Ohio Mr. Football, for the starting job in the spring, with Burrow eventually transferring to LSU.

"(He's) growing every practice, every game, and building as we go," said acting head coach Ryan Day, subbing while Meyer serves a three-game suspension for his mismanagement of a fired assistant.

Granted, those games weren't against top teams, but there already is a presence about Haskins, an anticipation that something exciting could happen every time he drops back in the pocket. No disrespect to Barrett — statistically the best QB to ever play at Ohio State — but Haskins isn't thinking too much about tucking the ball and running it himself, which was the way Barrett carried the team often the past two seasons.

Haskins is mobile enough, it's just that he's looking for home runs instead.

His two deep touchdown passes last week to Johnnie Dixon, 38 yards and 44 yards, weren't rainbows but rockets that hit the senior receiver in stride just as he reached the end zone.

"Mom's home cooking, just falling in your lap," was how Dixon described them.

"Give them a good spot with the ball and they can take it to the house any time," Haskins said. "That's the thing for me is ball placement."

There is talk that Haskins, with his size (6-foot-3, 220 pounds) and quick release, has NFL skills and could be the best quarterback to play for Ohio State since Troy Smith won the Heisman Trophy in 2006.

That's premature, of course, but certainly Saturday's prime-time, nationally televised clash between the No. 4 Buckeyes and No. 15 TCU in Arlington, Texas, will be the season's first decent measuring stick of how effectively Haskins can navigate against a much better defense on a bigger stage.

Haskins' potential has been duly noted by TCU defenders, who gave up just two pass plays longer than 10 yards in last week's rout of SMU.

"He can for sure throw, but I think he can move too," TCU senior safety Niko Small said. "The film I've watched, that guy can run around when he wants to. I think he makes smart decisions, and he doesn't want to get his body too much banged up because he knows he's a good thrower. I think he can do it all, honestly."