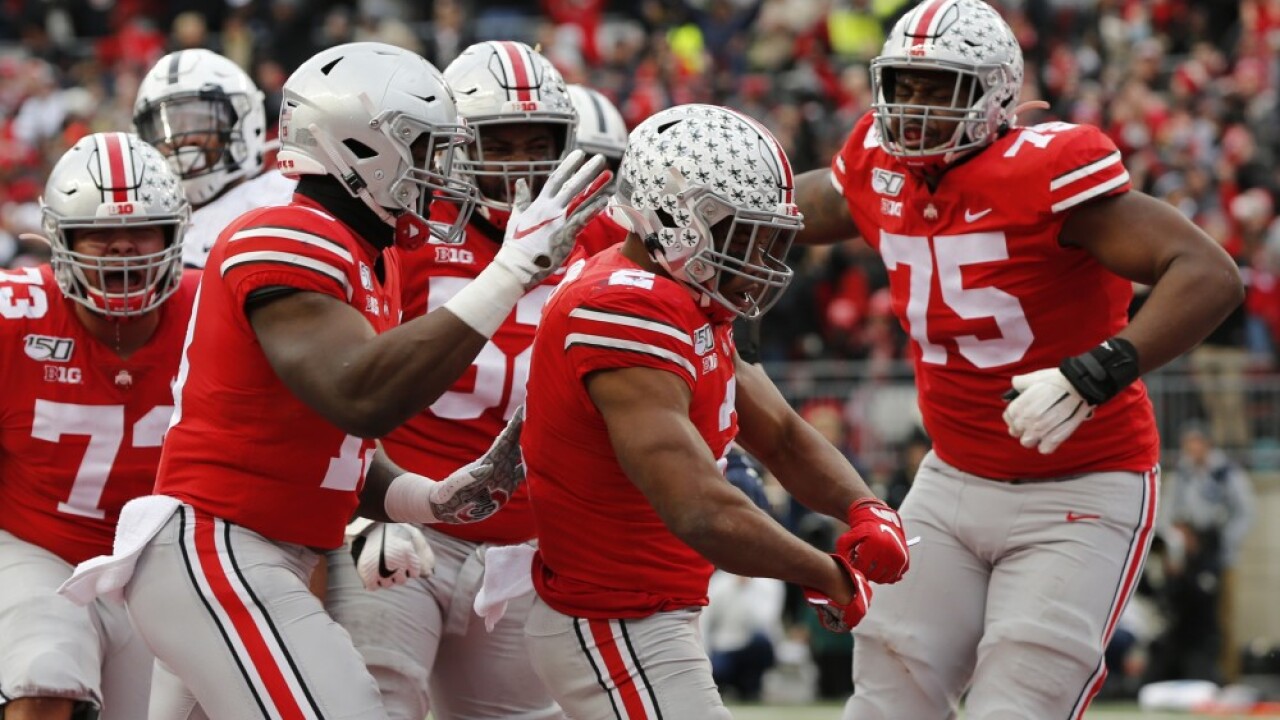 The second regular-season AP Top 25 of the season includes Southeastern Conference teams that begin playing next week but not Big Ten teams that start playing in about a month.

Next week the SEC starts playing and the Big Ten teams become eligible for the AP Top 25.

The Pac-12 seems prepared to get a fall football season fired up soon, too. And when it does, those teams will show up back in the rankings, too.

It is safe to say being an AP poll voter will never be more difficult than this year. So maybe it was only fair that they got a break Sunday. Not much changed in the rankings after another light schedule in college football, but things are going to be complicated from here on out.

It is possible No. 1 Clemson will play five game before Ohio State, which was No. 2 in the preseason, plays one. If the Pac-12 starts up on Halloween, No. 2 Alabama could have played five games before Oregon plays one.

Though it should be pointed out that 16 FBS games have already been postponed through the first three weekends of the season. Every schedule is tentative as schools try to navigate playing through the pandemic.

The Big Ten released its schedule on Saturday. The AP gave its poll voters a couple extra days to digest new information before allowing them to include Big Ten teams next week.

The preseason poll included six Big Ten teams, including Ohio State at No. 2.

Reality check rolls through the latest Top 25 to see where things stand before another major makeover.

Reality check: Clemson tight ends caught 26 passes last season. Through two games this season, they have nine catches, led by Braden Galloway’s five for 60. Will that keep up when the competition gets better?

Reality check: DT Christian Barmore, a third-year sophomore, has a chance to be Quinnen Williams-type disruptor for the Tide. He missed Alabama’s last scrimmage with a knee issue and the Tide could probably live without him in the opener.

Reality check: With RB Rhamondre Stevenson serving a suspension, who emerges as the Sooners top running back? Redshirt freshman Marcus Major and freshman Seth McGowan shared the carries in the opener.

Reality check: With so much hype about Georgia’s quarterback transfers and recruits, it would a pretty cool story of D’Wan Mathis ends up starting the opener. The redshirt freshman seemed like a forgotten man.

Next: vs. Mississippi State, Sept. 26

Reality check: Star S Jacoby Stevens was given LSU’s coveted No. 7. The Tigers’ have lost a lot on defense, but Stevens is a versatile potential All-American.

Reality check: Irish were down some defensive starters against South Florida. It didn’t matter against USF, but it’d be good to have S Kyle Hamilton (ankle) and the other missing players back against a Wake offense that can be productive.

Reality check: The best matchup of the SEC’s opening weekend will be a good test of Auburns rebuilt defensive front.

Reality check: Red Raiders should test a Longhorns’ secondary that is expected to be much improved this year.

Reality check: Tar Heels will be idle for a second straight week after its game against Charlotte was canceled and they could get no takers for next week’s open date.

Reality check: The new offensive seems to have unlocked the full potential of TE Brevin Jordan, who has 10 catches and 171 yards and two scores already. Injuries helped limit him to 35 for 495 and two scores last year.

Reality check: Bearcats have had one of the best rush defenses in the American the last two seasons, holding opponents to fewer than 3.7 yards per carry.

Reality check: Hard to know what to make of some of these early season results after a strange offseason. Cowboys dropped in the polls after a sloppy performance against Tulsa. How quickly do they get QB Spencer Sanders (ankle) back?

Reality check: The Vols turnaround last year started with a decisive victory against South Carolina. If Tennessee wants to be a legit challenger in the East, this needs to be a victory.

Reality check: Tigers will go two weeks without playing after a COVID-19 outbreak.

Reality check: Cougars get back after a COVID-19 postponement. That performance against Navy is a little less fluky after the Middies rallied to win.

Reality check: Ragin’ Cajuns weren’t their best against Georgia State following that big upset at Iowa State, but that excellent running game can erase a lot of issues against Sun Belt rivals.

Reality check: What will the post Bud Foster Hokies’ defense look like? It’s been 25 years since he wasn’t running that side of the ball for Virginia Tech.

Reality check: Panthers’ stingy defense gets its first test from a fast and creative Cardinals’ offense.

Reality check: The triple-option has been rolling for Army, but the defense has been almost as good, allowing only 4.17 yards per play, ninth in the country.

Reality check: QB Terry Wilson returns from a season-ending injury last year to lead the Wildcats. The team is 12-3 with him as the starter.

Reality check: Need to clean up the defense, which at times was lost against Miami. The offense has plenty of speed to be an ACC contender.

Next: at Western Kentucky, Oct. 10

Reality check: Thundering Herd are the first Conference USA team to be ranked since 2015.