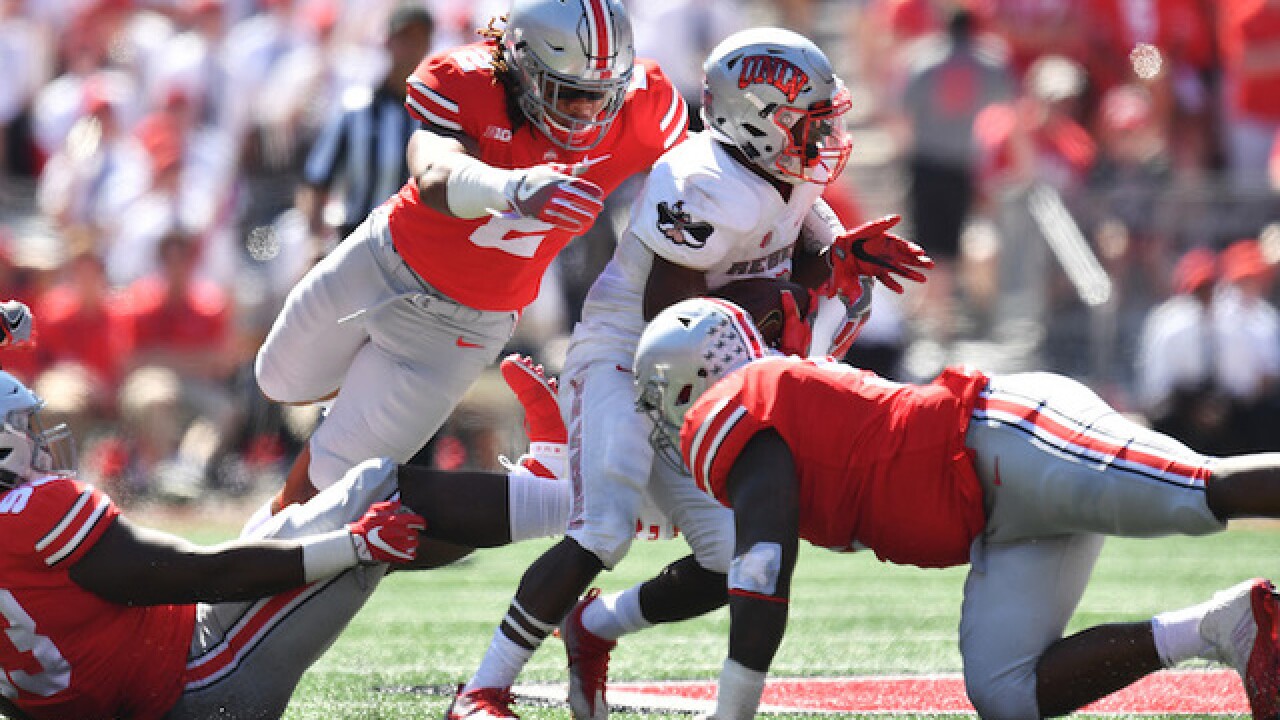 Copyright 2018 Scripps Media, Inc. All rights reserved. This material may not be published, broadcast, rewritten, or redistributed.
Jamie Sabau
<p>COLUMBUS, OH - SEPTEMBER 23: Chase Young #2 of the Ohio State Buckeyes dives to make a tackle on Lexington Thomas of the UNLV Rebels in the second quarter at Ohio Stadium on September 23, 2017 in Columbus, Ohio. (Photo by Jamie Sabau/Getty Images)</p>

Preseason camp for Ohio State has been anything but normal. Superstar coach Urban Meyer has been absent, and reporters have been kept away from acting coach Ryan Day and players. Happenings from inside the shrouded fence at the Woody Hayes Athletic Center have come out only via Ohio State’s own social media channels.

More details about position battles trickled out on Friday in the form of an emailed news release from Day, the co-offensive coordinator/quarterbacks coach who has been running the show since Meyer was put on paid leave just before camp opened two weeks ago. Meyer is on the shelf while Ohio State investigates his handling of a former assistant coach who was accused of domestic violence.

Besides informing the media that the team was treated to the Beyonce-Jay-Z concert at Ohio Stadium on Thursday night, Day said — without making reference to Meyer’s absence — that the team is working hard in preparation for the opener on Sept. 1 against Oregon State .

“The energy level the entire group has brought to each day is a testament to the work ethic and perseverance of our program,” Day said.

Training camp ends with a scrimmage on Saturday. A regular practice schedule will commence as school starts at Ohio State next week. The university says there should be some word on the Meyer investigation then , too.

Here’s some of what we learned from Day’s statement :

Brady Taylor seems to be the next man up at center after the departure of All-American Billy Price. But Day said Michael Jordan, a fixture at left guard the past two seasons, also has been practicing snaps, as has redshirt freshman Josh Myers.

“There are fierce competitions at all three positions,” Day said.

Tuf Borland continues to heal from a leg injury, so Baron Browning, who saw playing time as a true freshman last season, and a finally healthy Justin Hilliard are competing for the starting nod at middle linebacker. At one outside linebacker spot, Dante Booker — who had six starts last year and then missed the rest of the season with an unspecified injury — is battling sophomore Pete Werner. On the other side, it’ll be either Malik Harrison or Keandre Jones. Both juniors have solid game experience.

Day said those jobs will be won in scrimmages in the next two weeks.

Jordan Fuller is the starter at one of the safety positions, with Isaiah Pryor and Jahsen Wint in the lead for the other spot. They’re being pushed by Brendon White and Amir Riep, Day said.

Veterans Damon Arnette and Kendall Sheffield are the solid starters at cornerback.

“Jeffrey Okudah is coming along well and, after missing the spring due to injury, has come back strong and is using each snap to improve,” Day said, adding that redshirt freshman Shaun Wade also is in the mix there.

LOTS OF TALENT ON D-LINE

Day says depth on the defensive line “might be the strongest on the team.”

That, of course, starts with star Nick Bosa at one defensive end spot, and the freakishly athletic Chase Young at the other one. Veterans Dre’mont Jones, Robert Landers, Jashon Cornell, Davon Hamilton and Jonathan Cooper round out the group.