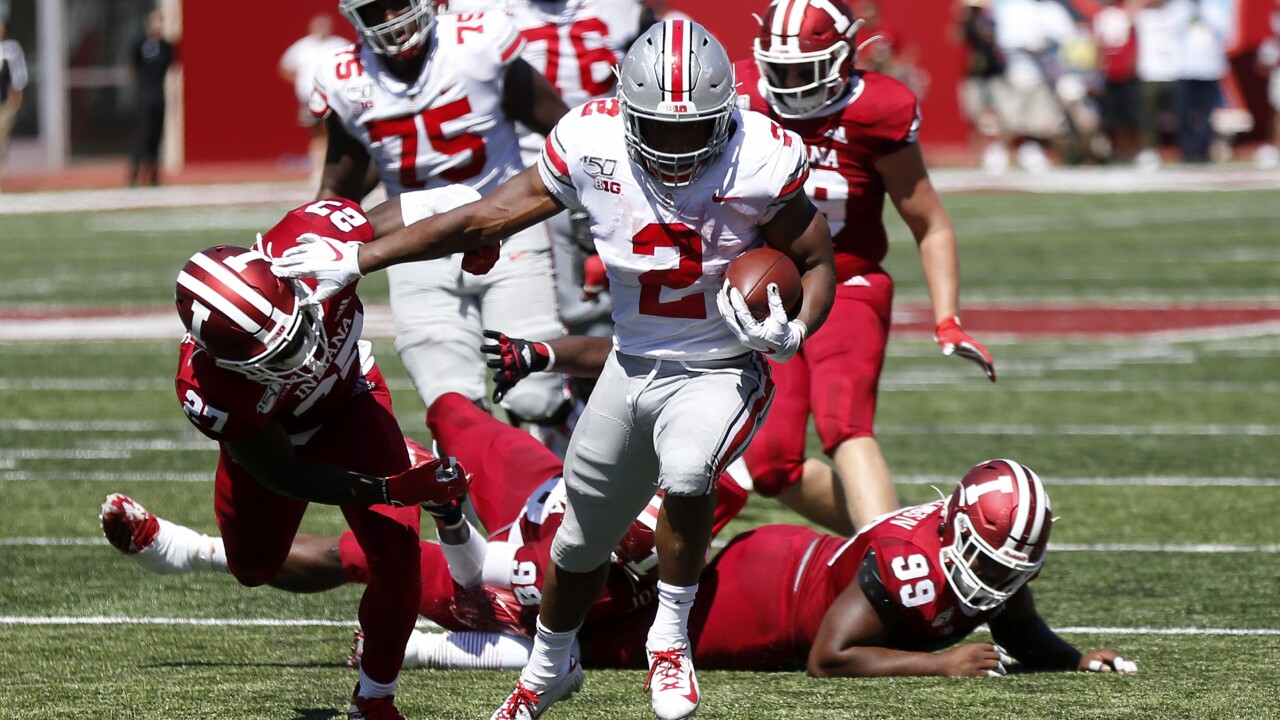 Their ability to take advantage of them quickly is turning Ohio State’s dynamic duo into an unbeatable combination.

Dobbins ran for 193 yards and one touchdown, caught one of Fields’ three touchdown passes and then watched most of the second half from the bench as the sixth-ranked Buckeyes blew out Indiana 51-10 on Saturday.

“I just told the offensive line I was going to meet them in the end zone and I think that gets them excited,” Dobbins said. “I love those guys. I love them like they’re my own brother. I think that helps us. We have a great bond.”

The Buckeyes (3-0, 1-0 Big Ten) have won each game this season by at least 24 points, and they’ve won nine straight overall and 24 in a row against the Hoosiers. Their 41-point victory margin Saturday was the largest in the series since 2006, and it was the most lopsided road win for the Buckeyes in a series that dates to 1901.

Dobbins perfectly played the role of setup man by repeatedly crashing through the middle, breaking tackles and leaving Indiana defenders on the ground . He only needed 22 carries to eclipse the 181-yard game he had in his only other trip to Bloomington in 2017.

Fields took care of the rest, going 14 of 24 for 199 yards while starting the scoring with a 3-yard TD run. Since transferring from Georgia, Fields has logged nine TD passes and four touchdown runs.

Just four plays after Chris Olave caught a 37-yard TD pass to give Ohio State a 14-3 lead, he blocked a punt out of the end zone for a safety. On Ohio State’s next offensive play, Dobbins sprinted up the middle for 56 yards and, four plays after that, K.J. Hill Jr. caught a 9-yard TD pass to put the Hoosiers on their heels and the game out of reach.

“We’ve got a lot of weapons,” Dobbins said. “You’ve got to watch out for us.”

Peyton Ramsey replaced the injured Michael Penix Jr. as the starting quarterback and about the only thing that went right after that was a trick play in which Ramsey threw the ball to Donovan Hale, who turned and threw a 49-yard TD pass to a wide open Peyton Hendershot.

That cut the Buckeyes’ lead to 30-10 just before halftime.

They ran 31 times for 42 yards, the offensive line allowed five sacks, Damon Arnette Jr. picked off Ramsey and ran it back 96 yards for a touchdown, and the defense gave up 528 yards — 314 of it on the ground, including a 40-yard TD run by Master Teague III, who had 10 carries for 106 yards.

“Rough day for the Hoosiers. Very disappointed with how we performed,” Indiana coach Tom Allen said. “But I stand before you, take responsibility for how our team takes the field and plays each and every week, and it wasn’t good enough.”

Ohio State has been everything expected of the Buckeyes. Fields was efficient, Dobbins proficient and the defense almost impenetrable. Ohio State scored in all three phases, including Arnette’s pick-six — the fifth-longest interception return for a touchdown in school history.

Indiana found out how far it needs to go to compete against the conference’s best teams. With the running game stalled, Ramsey had to rely almost exclusively on his arm. And when the Hoosiers couldn’t sustain drives, their defense wore down fast.

Penix Jr. missed the game with an undisclosed injury, giving Ramsey a chance to play against his home-state team. It didn’t go well for the Hoosiers, who didn’t gain a yard on their first two series and only put together two scoring drives. Ramsey wound up 19 of 33 with 162 yards, no touchdowns, the interception and four sacks. It’s also unclear whether Penix could play next week.

Indiana closes out the non-conference season against Connecticut next Saturday.