Haskins' profile on the rise with another big game on tap 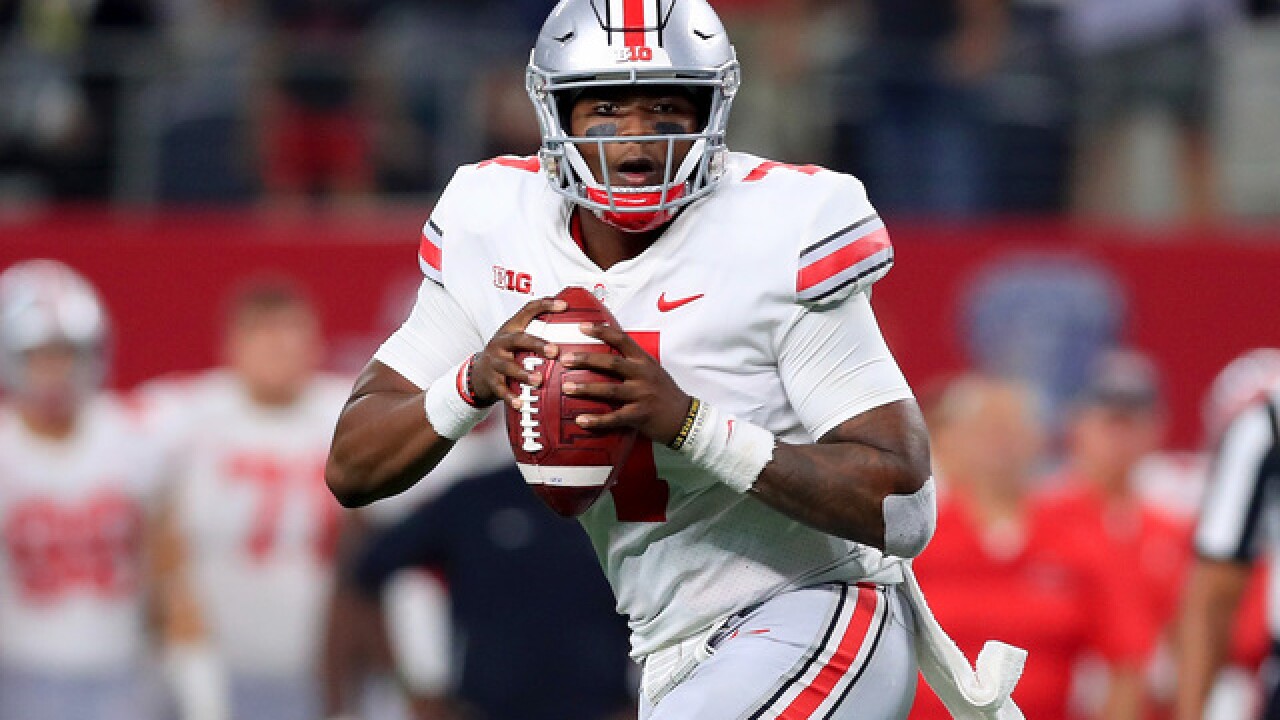 Dwayne Haskins Jr. got a phone call from coach Urban Meyer on Saturday night, hours after the quarterback bullied Tulane in a performance that turned up the volume of talk about his potential Heisman Trophy candidacy.

Meyer wanted to make sure Haskins was keeping his feet on the ground as the hype around him intensifies.

"I called him driving home with that message, just stay focused," Meyer said Monday. "We've had some pretty high-profile guys around here, and I've seen it go both ways. One thing about Columbus, Ohio, is this is the show, and they become bigger than life. But he's a really humble guy, he's a very conscientious guy, comes from a great family. So he's been great so far."

The spotlight on the third-year junior will only get brighter if he can go into a hostile "white out" at Beaver Stadium and lead No. 4 Ohio State past No. 9 Penn State in a nationally televised game (on News 5) on Saturday night.

His eye-popping passing numbers are even better than they seem, considering he didn't play for big chunks of the second half after Ohio State was comfortably ahead in three of its four wins this year. On Saturday, he threw for 304 yards and five touchdowns in the first half before taking a seat.

Haskins is second among Division I quarterbacks in touchdowns (16) and completion percentage (75.7), third in quarterback rating (207) and is in the top 10 in passing yards and yards per attempt. He has been sacked only three times and picked off just once. The only player who has more touchdown passes is Hawaii's Cole McDonald with 20, but he has played in one more game.

"I just want to show how dangerous the offense is, and with me at the helm, a lot of plays can be made," said Haskins, whose default setting is to heap praise on the offensive line and receivers before saying much, if anything, about himself.

He is turning heads with his ability to throw into tight spots and launch perfectly placed long balls.

"Dwayne for Heisman," Ohio State receiver Austin Mack said after the 49-6 rout of Tulane that earned Haskins his second Big Ten co-player of the week designation this season. "He's being a pro, making a lot of tough reads and throwing the ball incredible. We all knew what Dwayne could do. It was just a matter of if he could be the guy on Saturdays."

Meyer credits Haskins' development with the relationship the player has with quarterbacks coach Ryan Day and being able to work on his skills over the past two years while J.T. Barrett held down the starting job.

"He wasn't ready as a true freshman," Meyer said. "Last year he was getting closer and closer, but he didn't see it. You saw him throw the ball nice, but that's one-third of playing quarterback. It's toughness and leadership. I just think it's the maturation of a gifted player."

NOTES: Meyer said All-American defensive end Nick Bosa will be out at least "several more weeks" while healing from surgery on a lower abdominal muscle. ... Running back Mike Weber, who suffered a slight foot injury in Saturday's game, will be ready to go against Penn State. ... Defensive tackle Robert Landers, who sat out last week with an injury, also will play. ... Backup running back Brian Snead was held out of the Tulane game for violating unspecified team rules.