Fields, Dobbins lead No. 4 Ohio St over No. 25 Michigan St 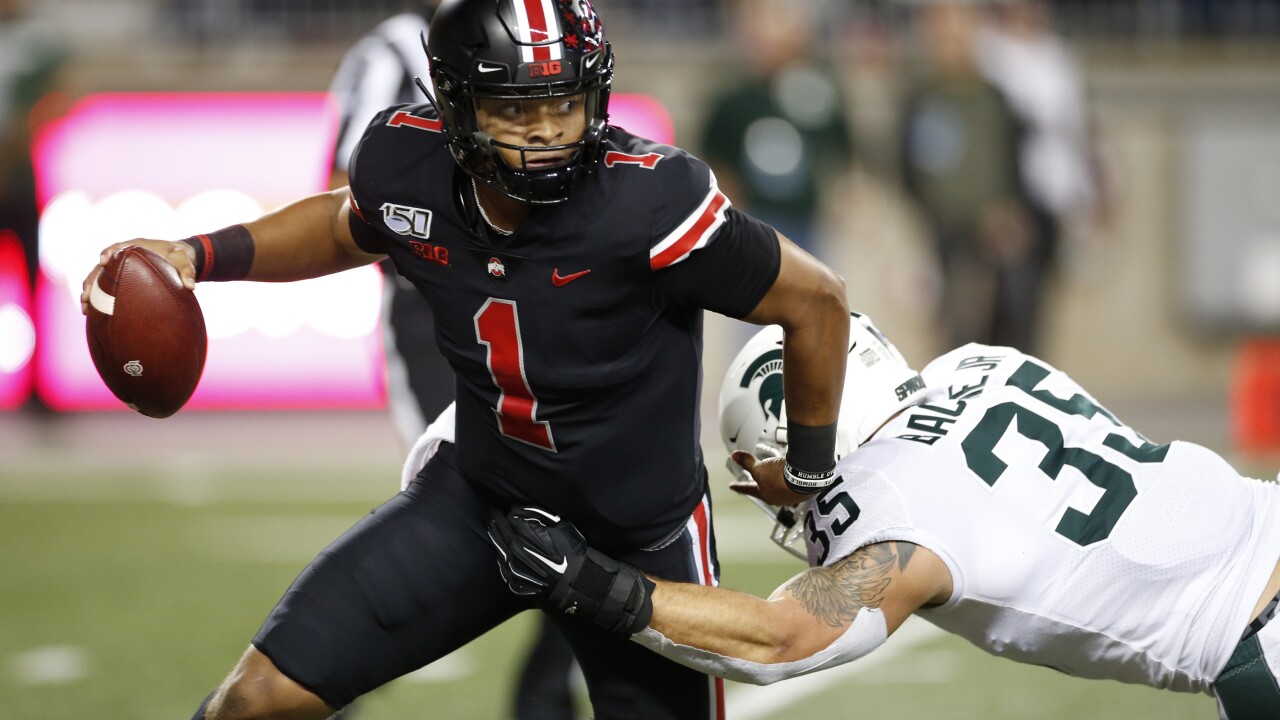 COLUMBUS — Justin Fields looked less like Superman and more like a mere mortal at times against No. 25 Michigan State on Saturday night. But that was bound to happen to the Ohio State sophomore quarterback at some point this season.

The Georgia transfer, who had accounted for 23 touchdowns in his first five games as starter, ran into a stout defense, got chased around, sacked and intercepted for the first time in his college career. But he stayed cool and engineered enough explosive plays to help No. 4 Ohio State bury the Spartans.

Fields threw two touchdown passes and plunged in for another score as the Buckeyes overcame an inauspicious start to roll to a 34-10 win. J.K. Dobbins rushed for 172 yards and a touchdown and is well on his way to the best season of his Ohio State career.

“I think we showed flashes, but we weren’t really consistent the whole game on the offensive side,” Fields said. “If we get better at that and more consistent about that, I think we’ll definitely be one of the best offenses in the country.”

The Buckeyes (6-0, 3-0 Big Ten) had to work to figure out Michigan State’s defense at the beginning, after blowing out every opponent through the first five games. They gained just 16 yards on 16 plays — with zero rushing yards — in the first quarter but finally got unstuck. Dobbins, Fields and two other backs then piled up 323 yards on the ground in the next three quarters.

“We were killing ourselves,” Dobbins said of the strange first quarter. “We had to get that fixed, get it going, then the offense started to roll.”

Fields finished 17 for 25 for 206 yards and was sacked three times — twice by Michigan State linebacker Joe Bachie, who finished with 11 tackles.

The junior who likely will be playing in the NFL next year ran the ball 24 times, averaged over 7 yards per carry and had an electrifying 67-yard breakaway for a touchdown late in the first half. That was against a defense that was allowing an average of just 55.8 yards per game.

Dobbins has 826 yards at the halfway point of the regular season, despite sitting for the second half of early season blowouts. He passed the 3,000-yard rushing mark for his career last week at Nebraska.

Michigan State: Gave the Buckeyes their first real test of the season but couldn’t keep up. They strung together some chunk plays at times but couldn’t find the end zone as the Ohio State defense bore down.

“They’re a really good team — it’s difficult to get points on them,” said Spartans quarterback Brian Lewerke, who was 20 for 38 for 218 yards, a touchdown and an interception. “I think we moved the ball really well, but we’ve just got to finish in the end.”

That’s what playing against a team like Michigan State in the Big Ten, a conference game like this is,” Ohio State coach Ryan Day said. “It’s just hard, its gritty and it was great to see the guys respond, especially in the second quarter.”

With Ohio State leading 3-0 in the second quarter, Fields completed a sideline pass to Binjimen Victor, who turned it into a 60-yard touchdown. The Buckeyes opened it up from there.

Ohio State finally showed some weaknesses but likely showed well enough against another ranked team to remain in the top four . Michigan State could drop out.

“I knew we were special from day one, just everybody else didn’t know,” said Ohio State defensive end Chase Young, who has 8.5 sacks this season. “That’s how we feel. It’s good to get national attention but we’re not focused on that.”

Michigan State: At No. 8 Wisconsin on Saturday.

Ohio State: After an off week, the Buckeyes play at Northwestern on Oct. 18.