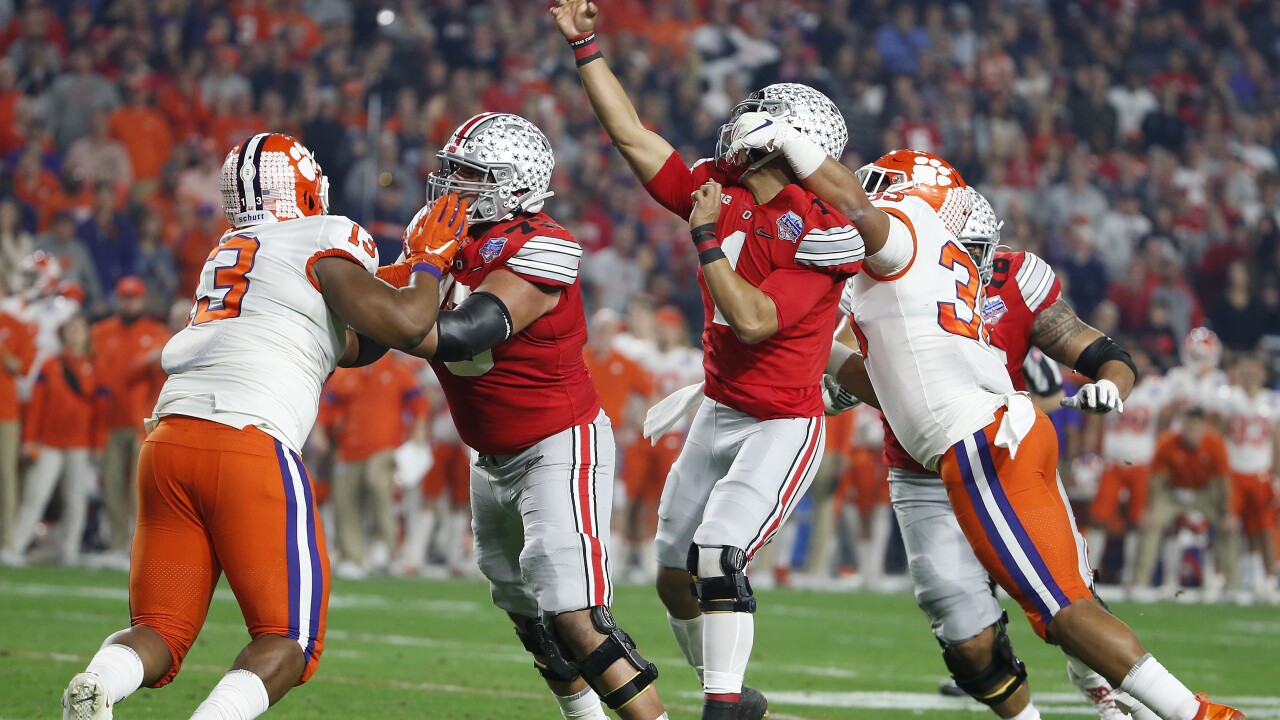 Ralph Freso/Getty Images
GLENDALE, ARIZONA - DECEMBER 28: Justin Fields #1 of the Ohio State Buckeyes is hit as he throws by Justin Foster #35 of the Clemson Tigers in the first half during the College Football Playoff Semifinal at the PlayStation Fiesta Bowl at State Farm Stadium on December 28, 2019 in Glendale, Arizona. (Photo by Ralph Freso/Getty Images)

A crew of officials from the Southeastern Conference worked the game between Atlantic Coast Conference champion Clemson and Big Ten champion Ohio State.

Referee Ken Williamson spoke to a pool reporter after the game to explain two crucial decisions made by replay review.

Replay officials initiated a video review that led to a targeting call on Ohio State defensive back Shaun Wade in the second quarter after he had sacked Trevor Lawrence on a third-and-5. Wade hit the bracing quarterback hard enough to keep him down on the turf for a few minutes. No flag was thrown on the field, but replay review spotted helmet-to-helmet contact.

Not only was Wade ejected, but what would have been a fourth down became a first down for Clemson at the Ohio State 30.

“This was a crown-of-the-helmet targeting foul,” Williamson said. “So it did eliminate a lot of other factors. Initial contact was with the crown of the helmet. Then he wrapped up for the tackle. So at that point, targeting was properly called.”

A few plays later, Travis Etienne fought off a tackler with a stiff arm and scored from eight yards out for Clemson to make it 16-7 with 2:45 left in the second quarter.

In the third quarter, with Clemson up 21-16, the Buckeyes appeared to score a touchdown after Clemson receiver Justyn Ross was stripped of the ball by Ohio State All-American Jeff Okudah and the fumble was returned to the end zone by Jordan Fuller.

Video review overturned the call on the field and ruled Ross never completed the catch.

“We had a lot of good looks on it,” Williamson said. “We put on fast motion and slow motion. The player did not complete the process of the catch, so, therefore, the pass was incomplete.”

Williamson said the play was reviewed in the stadium as well as at the video review center the SEC uses in Birmingham, and said they determined when Ross moved, the ball was becoming loose in his hands and he did not complete the process of the catch.

Ohio State coach Ryan Day tried not to criticize the officiating in his postgame comments.

“I think when we look back on it, it is going to be overwhelming,” Day said.

Ohio State athletic director Gene Smith told Yahoo Sports that he was angered by the call. Smith did not return a text message seeking comment that was sent to him by The Associated Press.