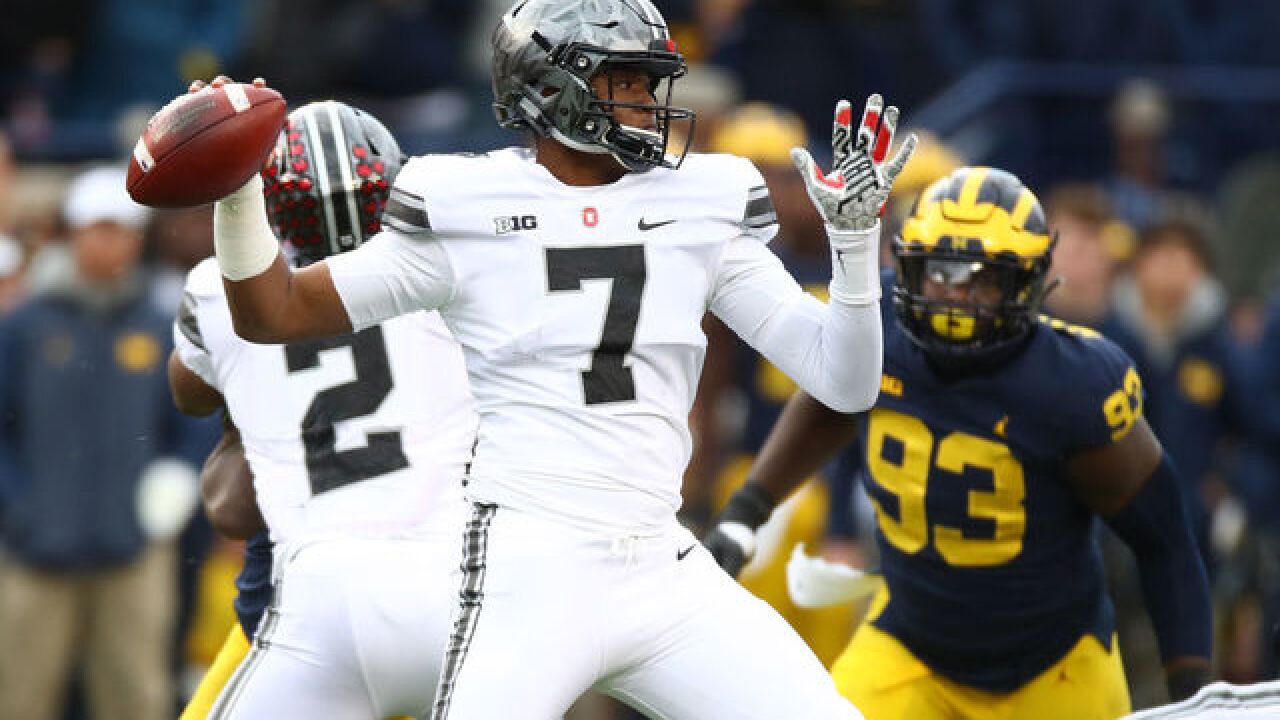 Copyright 2017 Scripps Media, Inc. All rights reserved. This material may not be published, broadcast, rewritten, or redistributed.
Gregory Shamus
<p>ANN ARBOR, MI - NOVEMBER 25: Dwayne Haskins #7 of the Ohio State Buckeyes looks to throw a pass in the second half against the Michigan Wolverines on November 25, 2017 at Michigan Stadium in Ann Arbor, Michigan. (Photo by Gregory Shamus/Getty Images)</p>

Dwayne Haskins replaced injured star J.T. Barrett in the third quarter and led No. 8 Ohio State from behind to beat Michigan 31-20 Saturday for the Buckeyes’ sixth straight win in the storied rivalry.

The Buckeyes (10-2, 8-1 Big Ten) head to the Big Ten championship game next week to face No. 5 Wisconsin, with hopes of making the College Football Playoff.

Michigan was relegated to starting John O’Korn because Brandon Peters wasn’t cleared to play after having a concussion and Wilton Speight is still out with cracked vertebrae. The fifth-year senior O’Korn simply didn’t make the most of the opportunity, completing fewer than half of his passes. He was picked off with about two minutes left and the Buckeyes ahead 24-20.

Mike Weber sealed it for Ohio State with a 25-yard touchdown run with 1:44 left.

Haskins, meanwhile, took full advantage of his chance to play. The redshirt freshman was 6 of 7 for 94 yards and had a 22-yard run that set up J.K. Dobbins’ 1-yard touchdown gave Ohio State a 21-20 lead late in the third quarter.

Barrett appeared to hurt his right knee on a run midway through the third quarter. He limped off the field and toward the locker room before returning to watch the rest of the game from the sideline.

Ohio State: The Buckeyes rallied from deficits for 14-0 in the first half and 20-14 in the second. Now the question is: Will they have Barrett for the Big Ten championship in Indianapolis.

Michigan: The Wolverines can’t win 10 games for the first time in Jim Harbaugh’s three seasons and they will lament the many missed opportunities they had against Ohio State.

Ohio State: The last time Ohio State faced Wisconsin in the Big Ten championship with a backup quarterback Cardale Jones led the Buckeyes to a 59-0 victory in 2014 that put them in the playoff.

Michigan: The Wolverines may end up in the Holiday Bowl.