Haskins steps forward as a leader as Buckeyes hit stride

Dwayne Haskins Jr. has been throwing touchdown passes and impressing NFL scouts all season, but Ohio State coach Urban Meyer thinks his quarterback became a fully legitimate leader once he showed he was willing to run the ball.

That didn’t happen until two weeks ago in the narrow overtime win over Maryland, when Haskins — a pro-style, drop-back passer — flashed his toughness in short-yardage situations and rushed for three touchdowns, including one in overtime.

“He dropped his pads at the toughest time in the game against a very good defense and got that yard,” Meyer said. “I can’t tell you how many times we’ve told him and how many times I’ve told him, the job of the quarterback is to get the first down.”

Said Haskins: “I definitely thought that gave the team an energy and a certain vibe for me. And I thought the team fed off that.”

Last week against Michigan, Haskins, a redshirt sophomore, made a statement on the team’s first offensive play, pulling the ball and running for a 9-yard gain. He’d go on to throw a school record-tying six touchdown passes in the 62-39 upset of the Wolverines that put the Buckeyes in the Big Ten Championship and back into the national championship discussion. 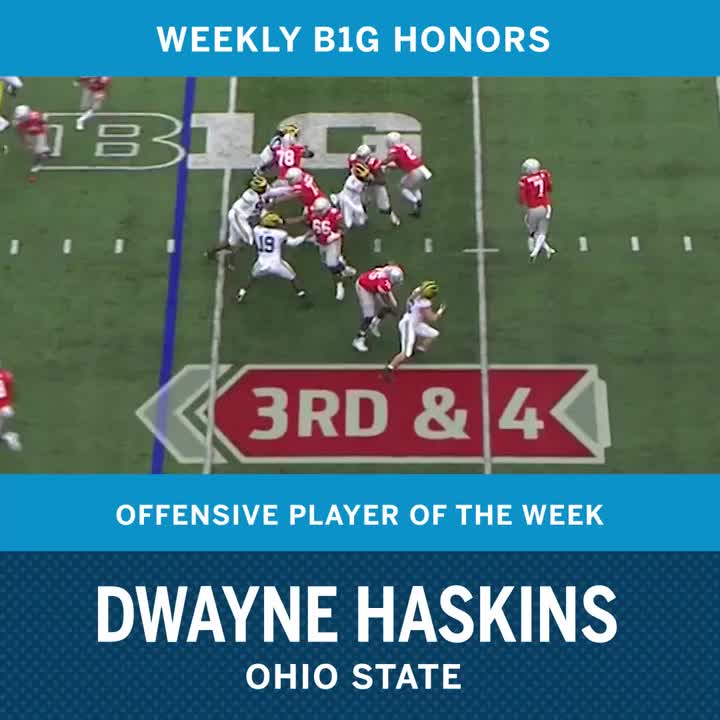 The weekly #B1G awards are out & @dh_simba7 scooped out the top offensive player honors after @OhioStateFB's win. Here's why ...

Haskins leads the No. 6 Buckeyes against No. 21 Northwestern in the conference championship game on Saturday, with a chance to get back to the College Football Playoff if some other pieces fall into place.

“Coaches aren’t on the field, there’s 10 other guys looking at him on every snap and he better get the right answer, and they better trust and believe in him,” Meyer said.

The 21-year-old Haskins has become a more demanding and vocal leader on the field as he achieved more success, taking on a greater role in directing and motivating teammates, even when it was uncomfortable.

“You get that vibe that you’re able to do things that you haven’t been able to do before,” Haskins said. “Each game, each practice, you feel a little bit more respect and energy and guys leaning toward you to get the energy from you.”

“He’s invested (from) the standpoint of being a leader, motivating the young guys, motivating the offensive line, the defense if they’re struggling and just being more of the face of our team,” McLaurin said.

Whether or not Haskins departs early for the NFL — he’s projected to be a first-round pick — he’ll go into the record books as having the best season of any quarterback in Big Ten history. His 4,081 yards and 42 touchdowns are conference records. The touchdown total is best in the nation and the passing yardage is second behind Gardner Minshew at Washington State. 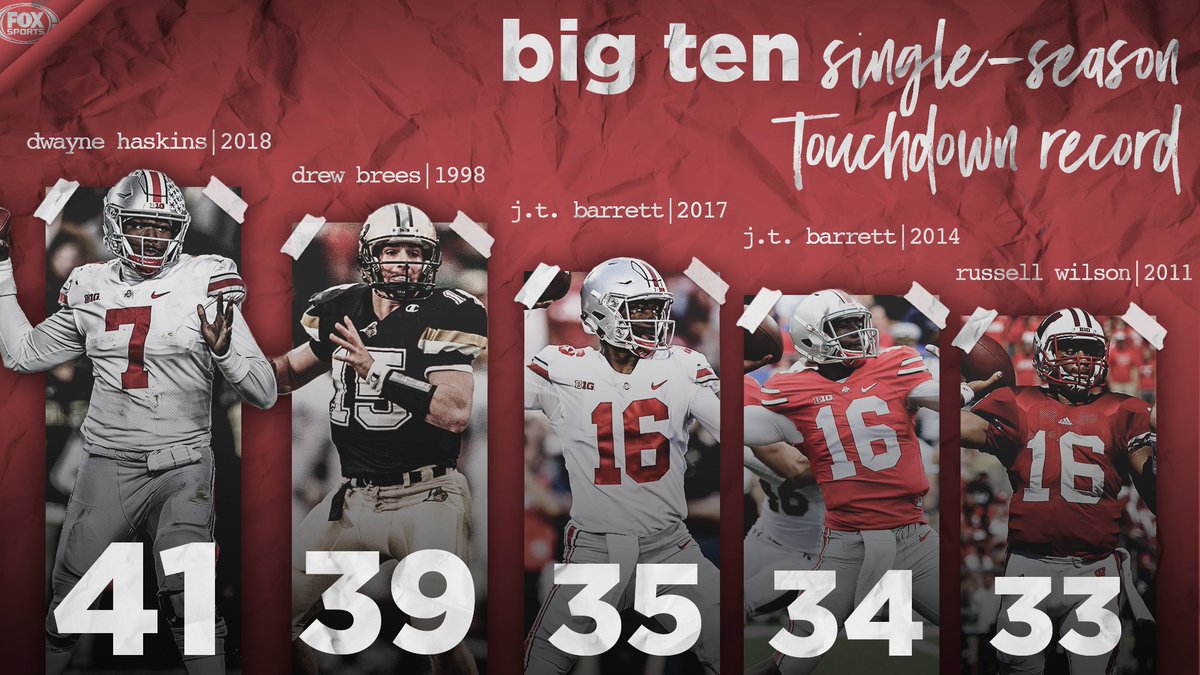 There will come a time when he’ll think about leaving for the NFL after just one year as a starter at Ohio State, but right now he’s focused on beating Northwestern. He’s got the size (6-foot-3, 220 pounds), the strong arm and the quick release demanded of an NFL quarterback.

Haskins, a likely Heisman Trophy finalist, has been Big Ten offensive player of the week for a record six times, one more than Buckeyes quarterback Troy Smith in his Heisman Trophy-winning season of 2006.

“He is a complete quarterback,” Northwestern coach Pat Fitzgerald said. “First of all, what jumps out is his poise, his accuracy, his understanding of the offense, and he just does a phenomenal job of taking what the defense gives him. And to have that touchdown ratio of 42 to seven is spectacular. If I had a Heisman Trophy ballot, I’d vote for him.”