Misery continues for Harbaugh, Michigan in The Game

With its best chance in years to beat Ohio State in The Game, Michigan crashed and burned.

Michigan’s “revenge tour” — along with its Big Ten and national title hopes — ended in misery on a cold, gray Saturday in Ohio Stadium, where the Wolverines have been unable to win a game since 2000. Final score: Ohio State 62, Michigan 39.

“I’m pretty shocked that the outcome is like this and how easily they moved the ball and made plays,” senior defensive back Tyree Kinnel said. “They completely beat us everywhere, the run game, the pass game, everyone is to blame.”

There was so much at stake for a Michigan team that hasn’t been able to beat the Buckeyes in seven years. Coach Jim Harbaugh was seeking his first win in the rivalry in his fourth season in Ann Arbor. Michigan was ranked No. 4 in the AP Top 25 and holding onto one of the top spots in the College Football Playoff. Ohio State had struggled at times this season, especially on defense, and was holding on at No. 10.

Then the Buckeyes hung 62 points on the best defense in the nation. That’s the most Michigan has ever allowed in regulation against any opponent ever, let alone Ohio State.

The loss ruins any championship hopes for Michigan. Somewhere Woody Hayes is smiling.

“I just ran into a good Ohio State team,” Michigan quarterback Shea Patterson said. “I always thought we had Big Ten Championship hopes, playoff hopes, maybe that got in the way a little bit. But hats off to them. They played a hell of a game.”

The Buckeyes came into the annual rivalry game with a Swiss cheese defense that has given coach Urban Meyer headaches in the past month. The Wolverines were favored after Ohio State struggled mightily with middling Big Ten team Maryland last week before pulling it out in overtime.

But the Buckeyes rose to the occasion Saturday. They scored on special teams and intercepted passes. Ohio State quarterback Dwayne Haskins Jr., who won last year’s game in Ann Arbor after coming in for the injured J.T. Barrett, threw six touchdowns , a school record in the rivalry. Freshman receiver Chris Olave caught two TD passes and blocked a punt that turned into the touchdown. 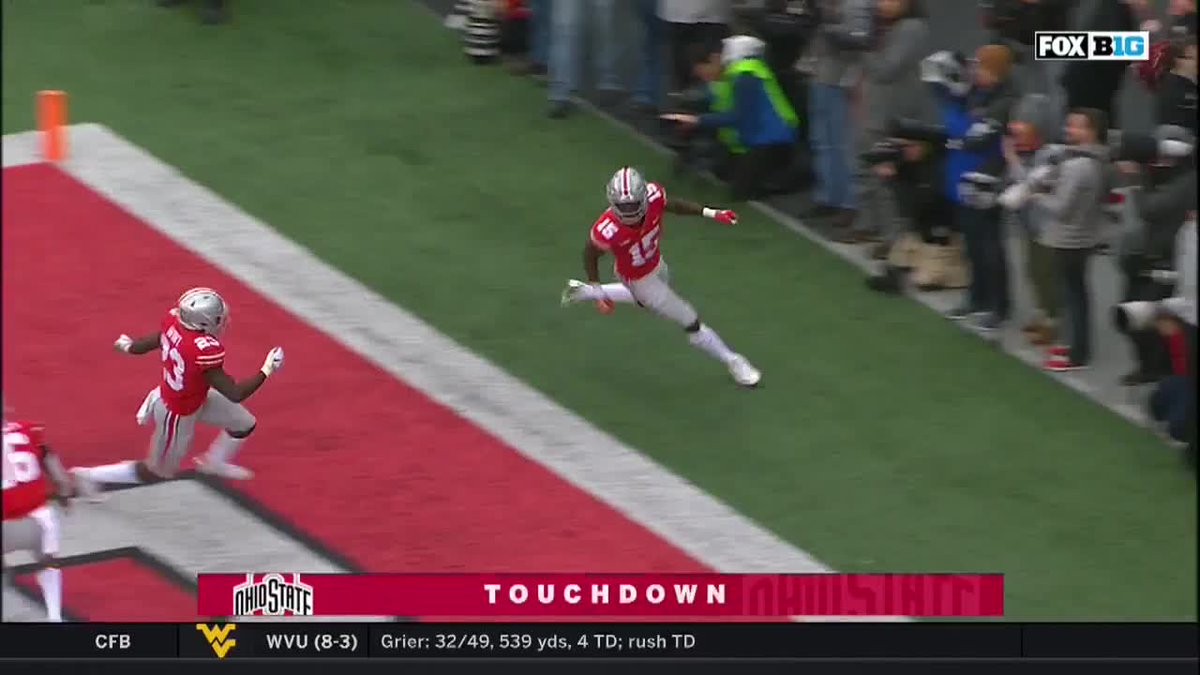 The block heard 'round The League!@OhioStateFB has opened the floodgates, and it started with this play:

“The score,” he replied.

Harbaugh didn’t offer much in the way of an explanation, either, other than to say Ohio State played exceptionally well.

This one went down hard.

“I’m going to have to sleep on this for the rest of my life, that I wasn’t able to get a win in this game,” Kinnel said.

Not only did Michigan lose, it got banged up. Linebacker Devin Bush went down with what Harbaugh said was a hip injury. He was helped off the field and wasn’t able to put any weight on his legs. Patterson suffered a bruised knee on a sack. Tight end Zach Gentry got a concussion.

Ohio State won the Big Ten East and heads to Indianapolis to play Northwestern for the conference title next weekend. The Buckeyes also stayed on the fringe of the College Football Playoff picture.

“To come back against your rival and play like that, that’s a focused team that loves each other and cares about each other,” Meyer said.

NOTE: An official scoring change was announced Sunday by Ohio State that credited Buckeyes quarterback Dwayne Haskins with an additional touchdown pass on a 78-yard play to Parris Campbell that was originally ruled a rushing attempt.