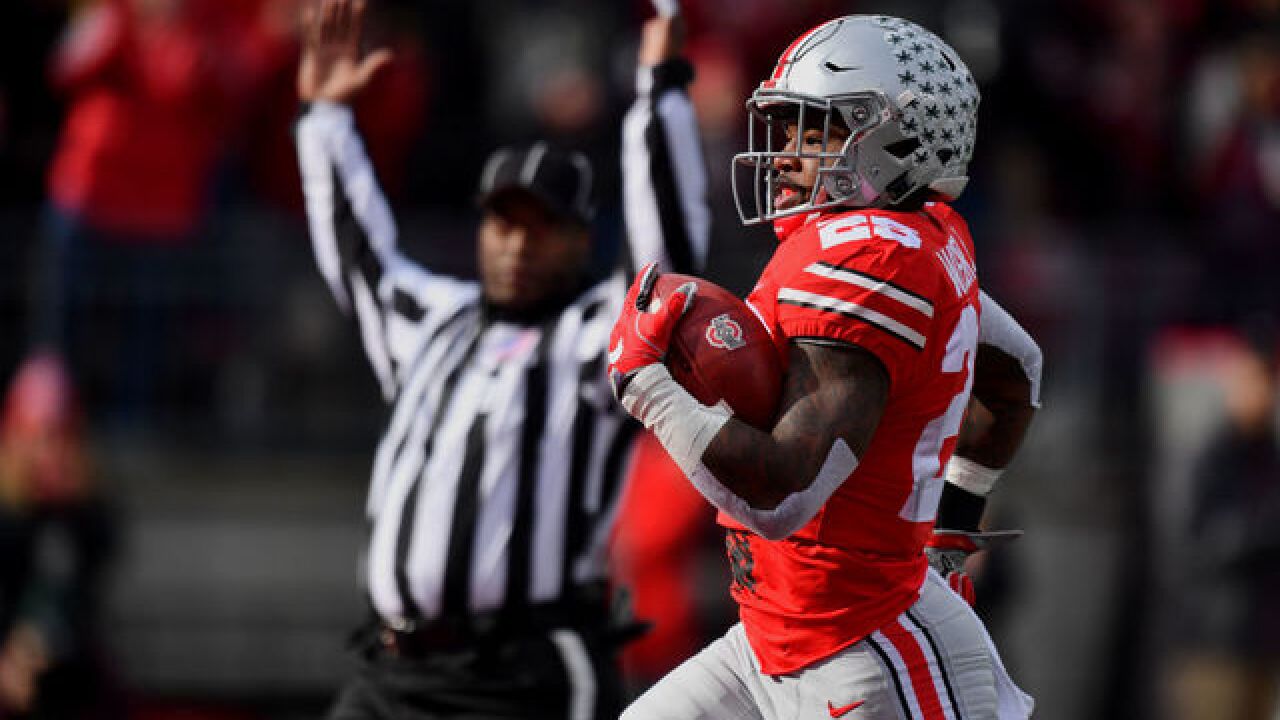 Copyright 2017 Scripps Media, Inc. All rights reserved. This material may not be published, broadcast, rewritten, or redistributed.
Jamie Sabau
<p>COLUMBUS, OH - NOVEMBER 11: Mike Weber #25 of the Ohio State Buckeyes scores on an 82-yard touchdown run in the second quarter against the Michigan State Spartans at Ohio Stadium on November 11, 2017 in Columbus, Ohio. (Photo by Jamie Sabau/Getty Images)</p>

J.T. Barrett threw for two touchdowns and ran for two more, and Mike Weber rushed for 162 yards and pair of scores as No. 11 Ohio State bounced back from a deflating loss last week to rout No. 13 Michigan State 48-3 on Saturday.

The Buckeyes (8-2, 6-1 Big Ten, CFP No. 13) scored on five of their first six possessions, led 35-3 at the half and cruised the rest of the way to claim sole possession of first place in the Big Ten East with two games remaining.

In a season already marked by radical highs and lows, the Buckeyes took out their frustrations on the Spartans, using a run-heavy attack to dominate them on both sides of the ball.

Ohio State outgained Michigan State 524-195, and a Buckeyes defense that was smoked by unranked Iowa in the 55-24 loss limited Michigan State quarterback Brian Lewerke — who threw for 445 yards last week against Penn State — to 131 yards and forced two interceptions.

Barrett was 14 for 21 for 183 yards with two touchdowns and two interceptions. J.K. Dobbins, who split time with Weber, rushed 18 times for 124 yards.

Coach Urban Meyer faced questions this week about not using the talented tailbacks enough. He put those concerns to rest on Saturday, with Weber and Dobbins combining for 286 yards on the ground.

Michigan State: The Spartans suffers a huge letdown after beating Penn State last week and watch their hopes of winning the Big Ten East dissolve in the cold Ohio afternoon. They could never get any significant offensive traction against the stout Buckeyes defense, which was intent on redemption.

Ohio State: The Buckeyes shook off a mystifying loss that took them out of national championship contention by bullying a divisional rival that has given them headaches in the past. A spot in the Big Ten title game is theirs if they win out.

Ohio State: The Buckeyes warm up for the Michigan finale with a home game against Illinois next week.