No. 4 Ohio State routs Rutgers, looks ahead to bigger test 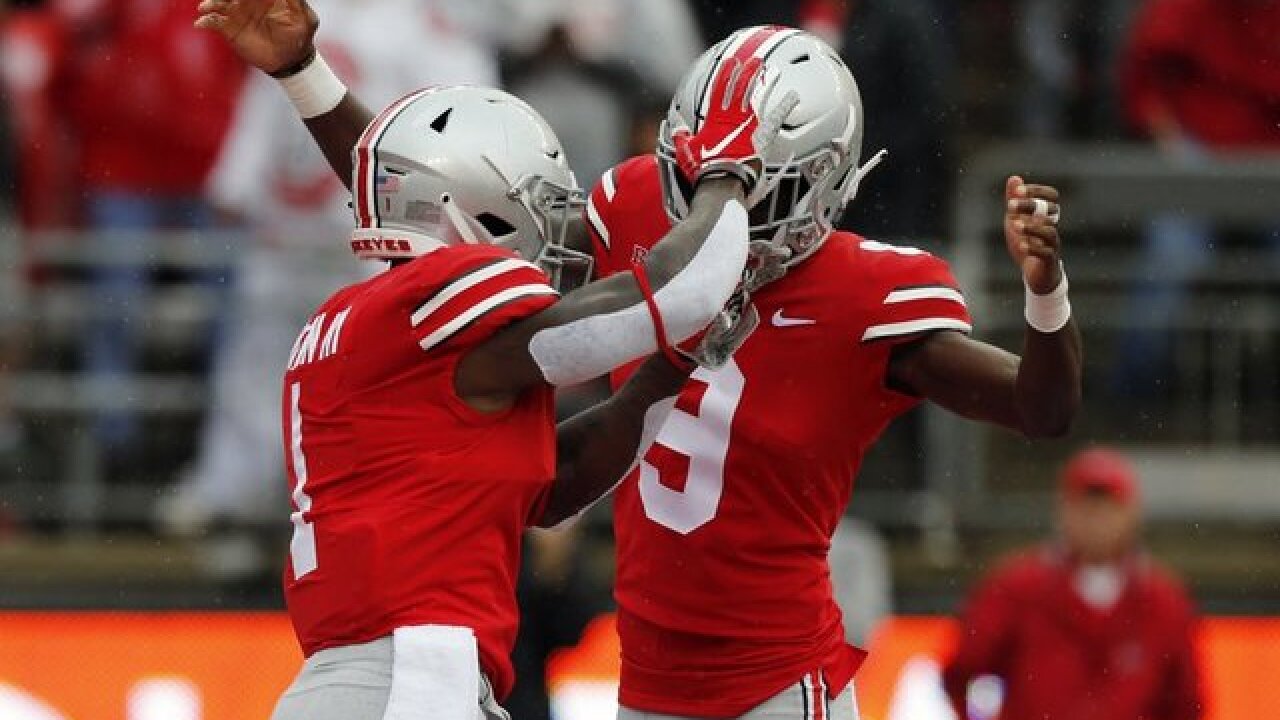 Copyright 2018 Scripps Media, Inc. All rights reserved. This material may not be published, broadcast, rewritten, or redistributed.
<p>Ohio State receiver Johnnie Dixon, left, celebrates his touchdown against Rutgers with teammate Binjimen Victor during the first half of an NCAA college football game Saturday, Sept. 8, 2018, in Columbus, Ohio. (AP Photo/Jay LaPrete)</p>

No. 4 Ohio State rolled over toothless Rutgers in a final tune-up game before the season’s first real challenge — a prime-time clash with No. 16 TCU next week in Arlington, Texas.

The Buckeyes flashed their cache of riches at quarterback Saturday in a 52-3 rout of the outmanned Scarlet Knights, after hanging 77 points on Oregon State in the opener last week.

Dwayne Haskins Jr. threw four touchdown passes to help the Buckeyes win for the 900th time in program history. They became the second program to reach that benchmark behind Michigan (944).

“It’s a whole lot of fun,” said Haskins, who finished 20 of 23 for 233 yards before taking a seat early in the third quarter after the game was in hand. “I want to run so many series, so many plays, that we ran out of time, and (were) up by so many points (that) we can’t do what we want.”

Don't knock @TheTateMartell down to the turf.

The Buckeyes, playing in their second game without suspended coach Urban Meyer, piled up 579 offensive yards after amassing 721 in the opener.

Meyer was back conducting practices this week but will miss one more game — next Saturday’s contest with TCU — to finish out his three-game suspension for mismanaging fired assistant coach Zach Smith, who was accused of domestic abuse and other misbehavior. Co-offensive coordinator Ryan Day ran the show again Saturday and had few reasons to fret, save for the 11 penalties that cost Ohio State 131 yards.

“I thought we did a nice job of throwing the ball early and then kind of running it late,” Day said.

Rutgers: The Scarlet Knights still need plenty of work before they’ll be able to compete with the Big Ten elite. They’ve lost the last three games to Ohio State by a combined score of 166-3.

“When you play teams like this, especially on the road, your margin for error is very, very small,” Rutgers coach Chris Ash said. “We made a lot of mistakes and they took advantage of them, capitalized on them and we just can’t do that against good teams.”

Ohio State: The Buckeyes showed they can score points almost at will against less-talented teams. Next week will be a better measuring stick.

“I’m very excited, (the) team’s very excited,” Haskins said. “We’re going to use this week as a great preparation for TCU on Saturday, and we’re ready for them.”

Through two games as a starter, Haskins is 42 of 53 for 546 yards with nine touchdowns and just one interception.

Martell played much of the second half in mop-up duty, but looked terrific in going a perfect 10 for 10 for 121 yards. He threw his first career touchdown pass, a 51-yarder to Terry McLaurin on third-and-16 in the second quarter.

Haskins or Martell, it doesn't matter. @OhioStateFB quarterbacks, and wide receivers, are simply better than their opponents. pic.twitter.com/mJg6zGbOlk

Rutgers true freshman quarterback Arthur Sitkowski was 6 for 18 for 38 yards with an interception before going out with an injury, possibly to his throwing arm.

Sitkowski apparently was hurt on the last play of the first half when he was sacked by Ohio State’s Nick Bosa. He was replaced by Giovanni Rescigno.

“He says he’s fine,” Ash said. “We’ve got to get back home and evaluate him tomorrow.”

Ohio State defensive end Chase Young was ejected in the third quarter after getting his second personal-foul penalty of the afternoon.

Day said the infractions “will be addressed.”

Rutgers: Plays at Kansas on Saturday.

Ohio State: Gets a tougher challenge Saturday against No. 16 TCU in Arlington, Texas.