No. 4 Ohio State's last game minus Meyer a test vs No 15 TCU 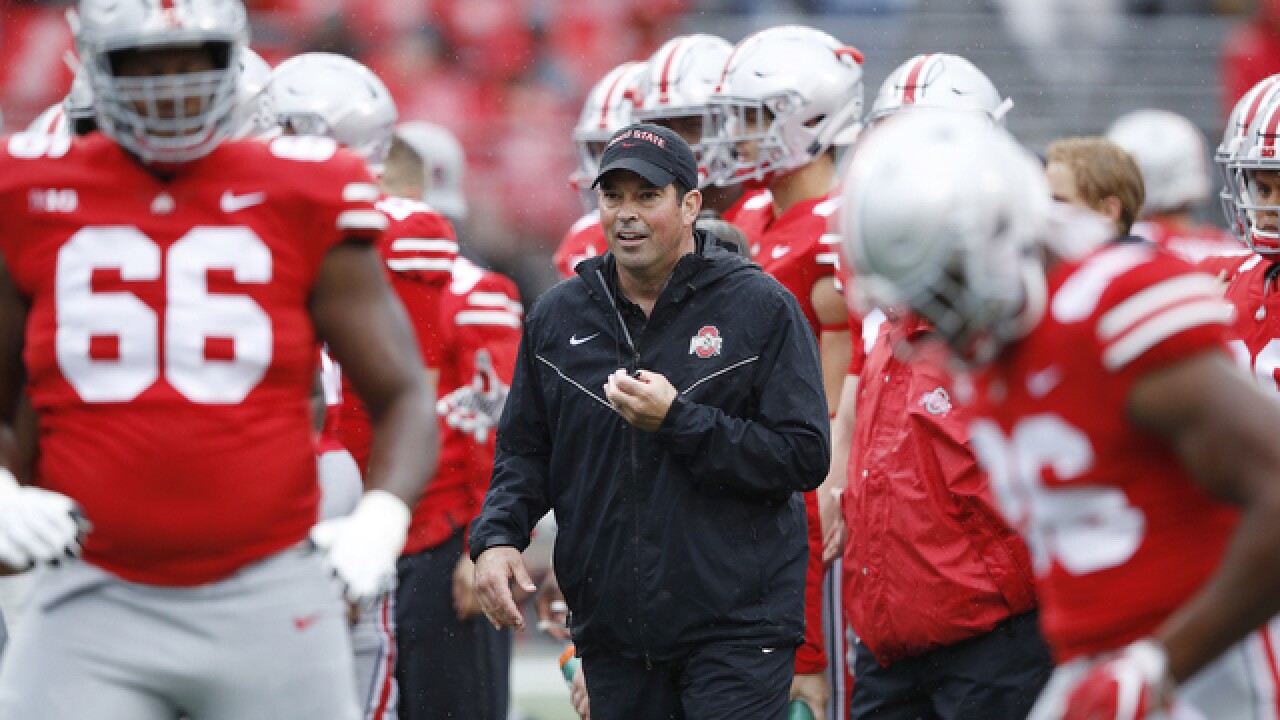 Copyright 2018 Scripps Media, Inc. All rights reserved. This material may not be published, broadcast, rewritten, or redistributed.
Joe Robbins
<p>COLUMBUS, OH - SEPTEMBER 08: Acting head coach Ryan Day of the Ohio State Buckeyes looks on before the game against the Rutgers Scarlet Knights at Ohio Stadium on September 8, 2018 in Columbus, Ohio. (Photo by Joe Robbins/Getty Images)</p>

Ohio State has made it through two games fine without Urban Meyer. Now the No. 4 Buckeyes face their toughest test on the last Saturday before their suspended coach can return to the sideline.

No. 15 TCU (2-0) hasn't faced a disruptive defensive front like Ohio State. But the Buckeyes (2-0), with their very accurate new starting quarterback Dwayne Haskins, also haven't been challenged the way they will be by coach Gary Patterson's 4-2-5 defense.

"They have all the answers. Any time a defense has been together that long, they have seen so many different things come their way," Buckeyes acting head coach Ryan Day said. "They make quick adjustments. They know exactly how you're trying to attack them."

Four seasons after Ohio State jumped over Big 12 co-champions TCU and Baylor for the fourth and final spot in the inaugural College Football Playoff, the Horned Frogs get their shot against the Buckeyes in the same stadium where Meyer led them to a national title.

There has been a building buzz around the TCU campus, only about 20 minutes from AT&T Stadium, but the Frogs don't need this as any kind of measuring stick.

TCU and Ohio State are among only five teams (Alabama, Clemson and Oklahoma are the others) who have finished in the Top 10 in the final AP poll at least three times in the past four years. The Frogs played in the Big 12 championship game last season.

"Everybody that you know of that's come from this program has put TCU where we are, and I don't think any specific game will let you know that we deserve to be at a certain place," senior center Niko Small said. "I think we've already put the tradition in and everybody knows that TCU is going to play hard regardless of who we're playing."

Meyer will wrap up his three-game suspension for mismanaging domestic-abuse allegations and other misconduct by former assistant Zach Smith, though the head coach has been able to take part in Ohio State practices since after the season opener.

Another person who will be nowhere nearby Saturday night is Gordon Gee, the man who gets a lot of credit for this Top 25 matchup coming together.

Gee's "Little Sisters of the Poor" remark as Ohio State's president nearly eight years ago came before the Frogs finished their undefeated 2010 season with a Rose Bowl victory, and before they were in the Big 12. When the athletic directors from TCU and Ohio State were at the same meeting in early 2011, they went from chatting to deciding to play each other in the future.

"I was privileged to serve as president of The Ohio State University for 14 years and I love the Buckeyes! I am also now privileged to be in the Big 12 and serve as chairman of the conference, and I have great admiration for TCU and its football program," said Gee, now president at West Virginia. "In deference to both teams, I will be watching the WVU women's soccer game on Saturday."

Some other things to know when Ohio State plays TCU for the first time since 1973, and first time ever away from Columbus, Ohio:

As expected, Ohio State's All-American defensive end Nick Bosa has been hard to stop. He already has five tackles for loss and three sacks among his nine tackles in two games. Defensive coordinator Greg Schiano said Bosa is "playing at a very high level" even while teams use multiple players to try to slow him down. "We are going to have to be aware of that because I think it will get more and more creative every week because he is such a special player," Schiano said.

TCU has had punt returns for touchdowns in its past three games, by three different players. The Horned Frogs are the only FBS school since 1996 to do that. KaVontae Turpin had a 78-yard punt return for a TD last week against SMU. Turpin's four career punt returns for a TD are a school record, as are his five special teams touchdowns.

Containing TCUs dual-threat quarterback Shawn Robinson will be a different challenge for Ohio State. The sophomore passed for 146 yards, a touchdown and an interception, and also rushed for 67 yards and another score in TCU's 42-12 rain-soaked win over SMU. Schiano said a running quarterback "changes all the math" because a defender has to account for him at all times.

BACK TO JERRY WORLD

Both teams played at AT&T Stadium last December: TCU lost to Oklahoma in the Big 12 title game, and Ohio State beat USC 24-7 in the Cotton Bowl. The Buckeyes' only other game there was that CFP tile game in January 2015. TCU is 2-2 in the home stadium of the NFL's Dallas Cowboys.