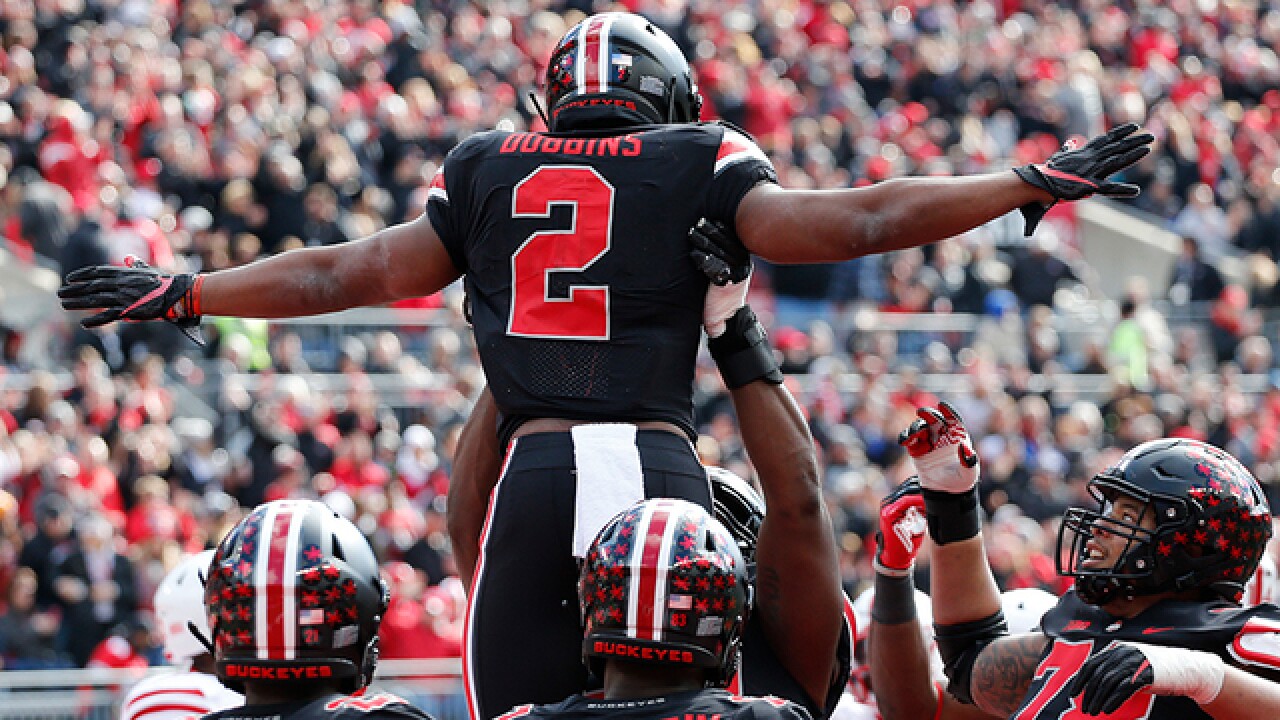 Copyright Associated Press
<p>Ohio State running back J.K. Dobbins celebrates with teammates after scoring a touchdown against Nebraska during the first half of an NCAA college football game Saturday, Nov. 3, 2018, in Columbus, Ohio. (AP Photo/Jay LaPrete)</p>

J.K. Dobbins ran for three touchdowns and Dwayne Haskins Jr. passed for two more as No. 8 Ohio State rallied in the second half and held off Nebraska 36-31 Saturday.

After Nebraska quarterback Adrian Martinez threw a 17-yard touchdown pass to JD Spielman to pull within five with 3 minutes left, Dobbins pounded away for two first downs to run out the clock.

Before the late Nebraska score, Dobbins broke through the right side and romped for a 42-yard touchdown with 5 minutes left to give Ohio State (8-1, 5-1 Big Ten, No. 10 CFP) breathing room.

The Buckeyes much-maligned running game and defense finally showed up in the second half.

Dobbins rushed for a season-high 163 yards — only his second 100-yard game this season. Running back Mike Weber added 91 yards on the ground.

Down 21-16 at half after the Cornhuskers (2-7, 1-5) turned two Ohio State fumbles into touchdown drives, the Buckeyes forced five straight punts and held Nebraska to a field goal when a drive stalled at the 1.

Dobbins broke off his run between the center and right guard to cap the next series.

Haskins fumbled twice and didn’t look sharp at times but nevertheless threw for 231 yards, with a long touchdown pass to Johnnie Dixon and a shovel pass that Parris Campbell turned into a score. He also threw an interception.

Nebraska freshman quarterback Adrian Martinez bested Haskins, who was in the Heisman Trophy conversation a month ago. Martinez threw for 266 yards and touchdown and rushed for two more.

Nebraska: The Huskers are a different team than the one that got out to an 0-6 start, with Martinez and running back Devine Ozigbo pushing Ohio State hard. Martinez continues to improve.

Ohio State: The Buckeyes managed to break out after struggling in recent games, particularly in the 40-29 upset loss at Purdue on Oct. 20.