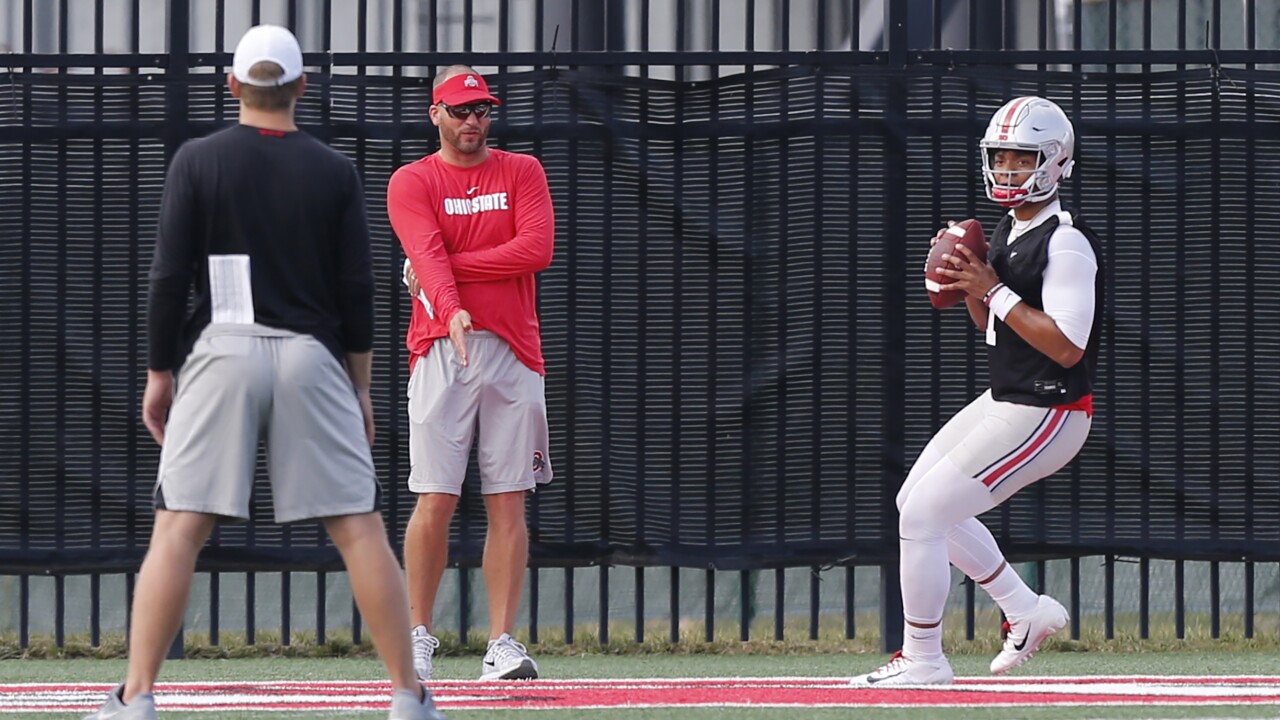 COLUMBUS — Ohio State coach Ryan Day on Monday made official what most people figured was a foregone conclusion: Georgia transfer Justin Fields will be the starting quarterback when the No. 5 Buckeyes open the season Aug. 31 against Florida Atlantic.

Day had lured the talented sophomore in January to succeed Dwayne Haskins Jr., and Fields practiced with the starters from the moment he arrived. His main competition this preseason was Gunnar Hoak, a graduate transfer from Kentucky who got to campus this summer and is still memorizing the playbook.

Still, Day was measured in his praise of Fields, who was one of the highest-rated prep prospects in the nation in 2018 but couldn’t wrest the starting job away from Jake Fromm at Georgia last season before deciding to transfer.

“All that means is that Justin will be taking the first snap on (in the opener), and where it goes from there, who knows,” Day said. “All the guys had good camps, but Justin kind of separated himself the last week.”

Fields showed some chops but was not spectacular in the spring game, and Day said it took him a few weeks of preseason camp to find his feet.

“I think just now he’s starting to scratch the surface,” Day said. “I still don’t think he’s where he needs to be.”

Fields said he has worked hard to get better on the field and has been trying to be more vocal and become a more forceful leader, an area where Haskins initially struggled last season.

“I feel like I’m improved a lot overall, just every part of my game,” Fields said. “I feel way more comfortable than in the spring, and I think all my teammates see that. Coach Day definitely sees it. I just feel more comfortable with the playbook and more comfortable in the pocket.”

The seven captains voted on by their teammates include two from last year: linebacker Tuf Borland and safety Jordan Fuller.

“I never really visualized (becoming a captain) like I did other things,” acknowledged Young, a junior who with a big season could be a first-round NFL draft pick next spring . “But when I got more into the program and more into what being a Buckeye was, I wanted to be part of that group of people who can lead a team.”

By most accounts, Young is the loudest and most demonstrative among the seven.

Saunders is a former walk-on who plays mostly on special teams.

One of the biggest challenges of the preseason for Day is trying to line up a tailback to spell Dobbins , who is expected to shoulder most of the load if he stays healthy.

Demario McCall, who was expected to be an H-back, is the most likely candidate, Day said Monday. Master Teague was a front-runner, but he just got back on the field after an injury. Behind them are a couple of promising true freshmen.

“Demario has had a good camp,” Day said. “I think there’s a chance you see them all play. (But) Demario has a leg up.”