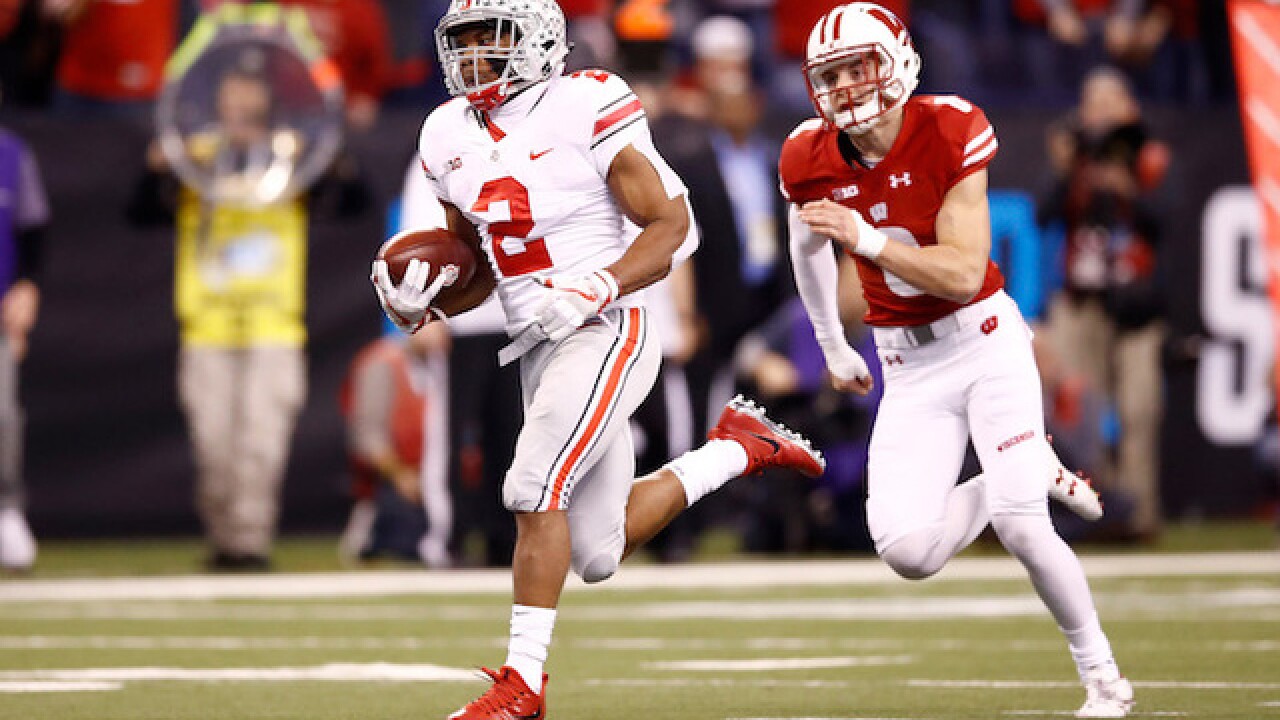 Copyright 2018 Scripps Media, Inc. All rights reserved. This material may not be published, broadcast, rewritten, or redistributed.
Andy Lyons
<p>INDIANAPOLIS, IN - DECEMBER 02: J.K. Dobbins #2 of the Ohio State Buckeyes runs with the ball against the Wisconsin Badgers in the Big Ten Championship at Lucas Oil Stadium on December 2, 2017 in Indianapolis, Indiana. Ohio State won 27-21. (Photo by Andy Lyons/Getty Images)</p>

Stanford running back Bryce Love’s decision to return for his senior year instantly made him a preseason front-runner for some of college football’s top individual awards.

Love won the Doak Walker Award as college football’s top running back and was runner-up in the Heisman Trophy balloting last year as he rushed for 2,118 yards. He’s an obvious candidate for both awards again this year, even though he will have a tough time matching his production from last season.

“I had a good chance to talk with Bryce, to talk about (how) this year can’t be about stats,” Stanford coach David Shaw said. “He broke a lot of records last year, did some phenomenal things last year. This year’s about him getting bigger, stronger, being more versatile, different things, adding to his game. We’re not going to do the Bryce Love stat watch.”

Love is among several players to enter the season as contenders to earn hardware this season. Here’s a rundown of potential candidates for some of college football’s top individual awards.

As a versatile quarterback who can beat defenses with his arm and legs, Tate fits the profile of many other recent Heisman winners.

Taylor finished sixth in the Heisman balloting last year and set an NCAA freshman record by rushing for 1,977 yards.

Grier threw for 317.3 yards per game last season and was the media’s choice as Big 12 preseason offensive player of the year.

Tate rushed for 327 yards in one game last season and ran for over 200 yards in two other contests.

Dobbins rushed for 1,403 yards and gained 7.2 yards per carry as a freshman last season

Love will try to join former Texas star Ricky Williams and former Arkansas standout Darren McFadden as a two-time winner of this award.

Taylor was one of three finalists for this award last year.

Harry had 82 catches for 1,142 yards and eight touchdowns a year ago.

Sills caught 18 touchdown passes last season to tie for the FBS lead and was a finalist for this award.

Oliver won this trophy last year and also was a finalist for the Nagurski Trophy given to the nation’s top defensive player.

Clemson’s defensive line is so fearsome that all four of its projected starters made the preseason all-Atlantic Coast Conference team.

BEDNARIK /NAGURSKI (separate awards given to the top defensive player)

Ferrell was a first-team AP All-American who collected 18 tackles for loss and 9 ½ sacks last year.

White had 133 tackles last season, including 14 for loss.

Baker had nine pass breakups last season to go along with three interceptions.

Johnson had a team-high 96 tackles and tied for the team lead with four interceptions last season.

As a redshirt freshman last season, he had 11 touchdown catches to tie for the SEC lead .

Wilson caught 38 passes for 490 yards in only five games last year before a foot injury shut him down for the rest of the season.