Ohio State opener nears, but the talk is not about football 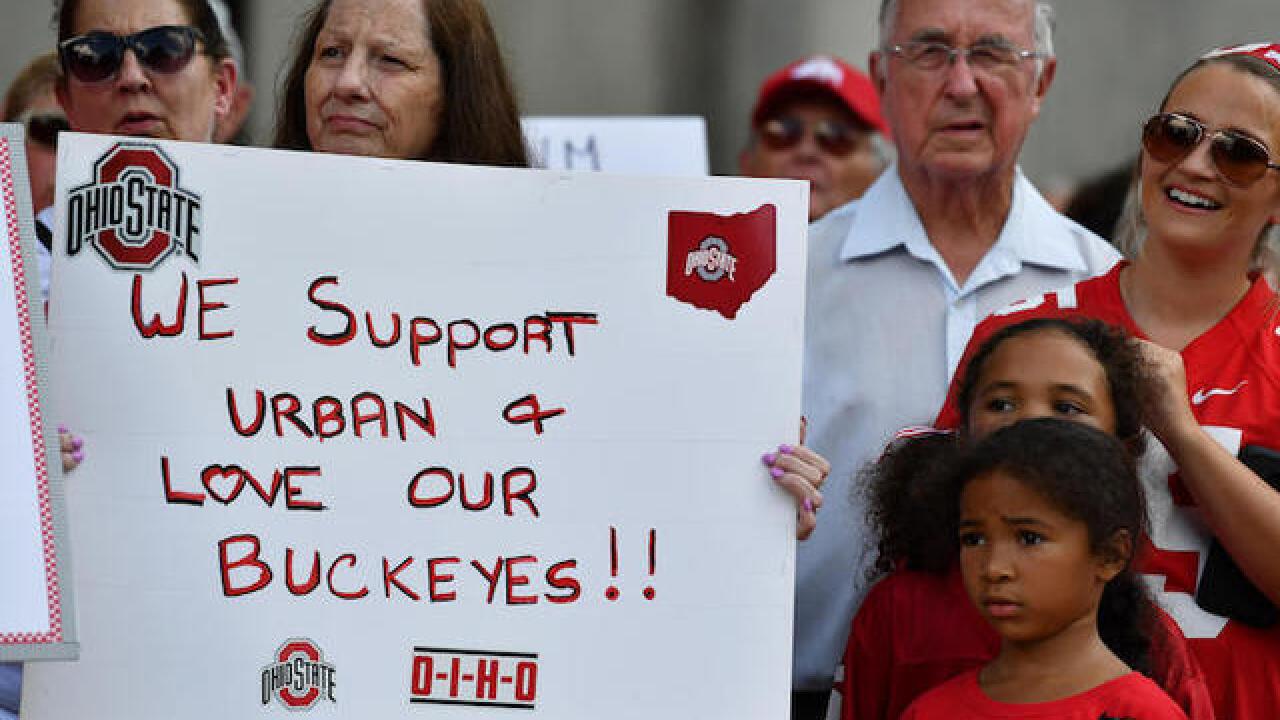 Copyright 2018 Scripps Media, Inc. All rights reserved. This material may not be published, broadcast, rewritten, or redistributed.
Jamie Sabau
<p>COLUMBUS, OH - AUGUST 6: Supporters of Ohio State head football coach Urban Meyer hold signs at a rally at Ohio State University on August 6, 2018 in Columbus, Ohio. Meyer is on paid administrative leave after a reports alleging he knew of a 2015 allegation of domestic violence against former assistant football coach Zach Smith, who was fired in July. (Photo by Jamie Sabau/Getty Images)</p>

A week before Ohio State’s season opener against Oregon State (Saturday at noon on News 5), few in Columbus have been able to focus on football. Not many are talking about the new starting quarterback or how to best use the two elite running backs.

Instead, the discussion has been about domestic violence, misplaced loyalty, lying and how much a football coach at a major university is expected to know about the personal lives of his assistants.

It has been a preseason unlike any other in Columbus.

On Aug. 1, two days before practice opened, coach Urban Meyer was put on paid leave and the university began an investigation into his handling of domestic violence allegations against receivers coach Zach Smith against his now ex-wife.

That situation came to a head Wednesday night. After nearly 11 hours of discussions, the board of trustees handed down a three-game suspension for Meyer. A two-week investigation concluded the superstar coach needed to be punished for tolerating Smith’s bad behavior for so long . Smith is the grandson of former Ohio State coach and Meyer mentor Earle Bruce.

After Wednesday’s news conference, Meyer was criticized for his response to a question about Zach Smith’s ex-wife, Courtney. On Friday, Meyer issued a statement apologizing directly to her.

Meyer, who is 73-8 in six seasons at Ohio State, will be off the sideline until the Sept. 22 game at Ohio Stadium against Tulane. The 54-year-old coach, however, will be allowed to run practice after Sept. 1.

The national debate about off-field issues is not likely to wane by then.

“The fact that Urban is not there still becomes a major part of it, so I don’t know that Ohio State gets to directly say, ‘Hey, the suspension has been handed down, there was a press conference, now let’s talk solely about football.’ I don’t think that’s going to happen,” said Austin Ward, who has covered Ohio State football since 2012 and writes for the website Lettermen Row . “He’s such a commanding presence, and now this thing could bleed out into the first couple weeks of the season where it still becomes a topic that you just cannot ignore.”

While Meyer does his time, 39-year-old co-offensive coordinator/quarterbacks coach Ryan Day, a second-year Ohio State assistant who has never before been a head coach, is running the show. In a normal year there would have been regular training-camp media access to Meyer, assistant coaches and players. They have all been off-limits for all of camp.

Aside from a couple brief windows for sideline observation, the media have been kept at bay, which had the unintended consequence of keeping the spotlight harshly fixed on Meyer instead of football.

After Ohio State coach Jim Tressel was fired in 2011 for lying to the NCAA about player violations, the Buckeyes, under interim coach Luke Fickell, slipped to 6-7. It was the team’s worst showing in over two decades.

Hugh Freeze resigned at Mississippi last year after university officials found a “pattern of personal misconduct.” The team then limped to a 6-6 finish under Matt Luke.

Steve Sarkisian was fired at USC during the 2015 season amid personal problems. The Spartans finished 8-6 under Clay Helton, who’s since led the team to seasons of 10-3 and 11-1.

Kirk Herbstreit, an ESPN college football analyst and former Ohio State quarterback, said getting the season started in Columbus should help turn the conversation to the field.

“I don’t know if I’ve ever seen a town impacted positively or negatively on a typical Saturday afternoon (over) the result of a football game, let alone when something like this happens to its program,” Herbstreit said. “So it’s kind of uncharted waters for the university and for that fan base. I think many of them are anxious for the ball to get up in the air.”