No. 4 Ohio State routs Tulane in Meyer's return to sideline 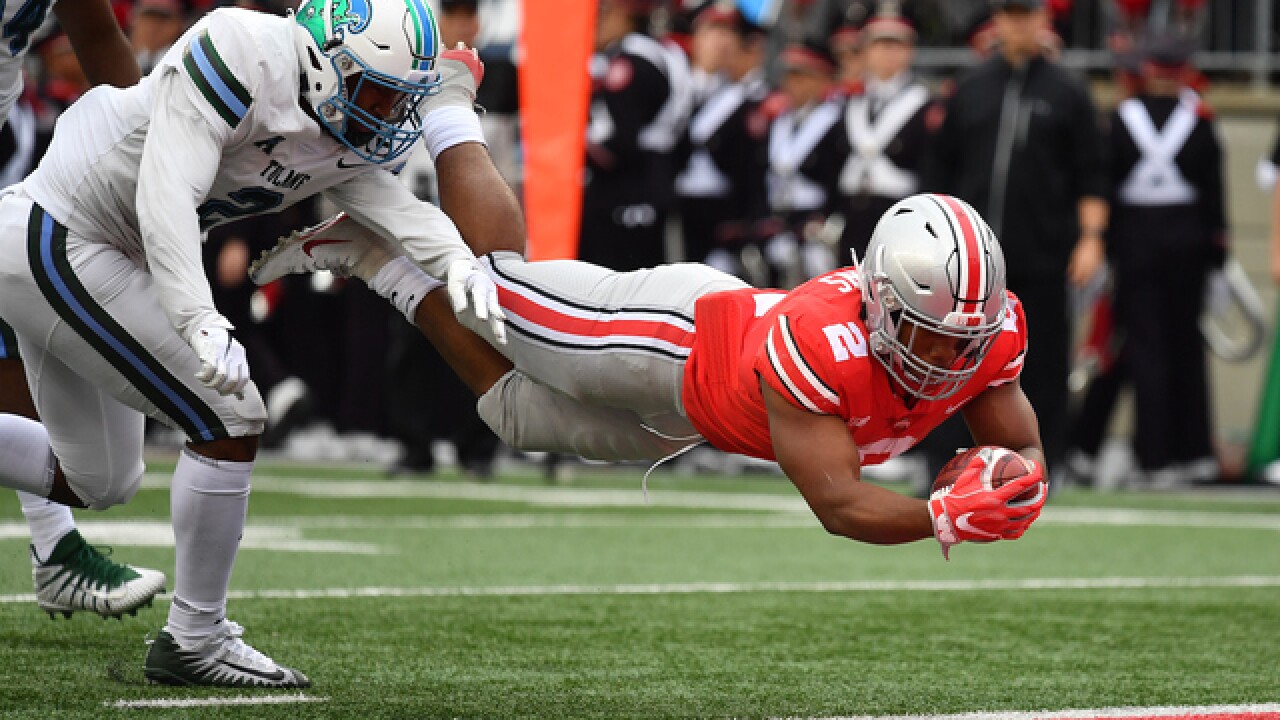 Copyright 2018 Scripps Media, Inc. All rights reserved. This material may not be published, broadcast, rewritten, or redistributed.
Jamie Sabau
<p>COLUMBUS, OH - SEPTEMBER 22: J.K. Dobbins #2 of the Ohio State Buckeyes lunges for the endzone on an eight-yard touchdown run in the second quarter in front of Roderic Teamer Jr. #2 of the Tulane Green Wave at Ohio Stadium on September 22, 2018 in Columbus, Ohio. (Photo by Jamie Sabau/Getty Images)</p>

Ohio State gift-wrapped a blowout for Urban Meyer in his return to the sideline, making sure the coach didn't have to get too stressed or too mad at anybody and didn't have to make any monumental decisions.

The No. 4 Buckeyes played like, well, like they played while Meyer was watching the first three games on TV while serving a suspension. Quarterback Dwayne Haskins continued to throw touchdown passes at a furious rate, and Ohio State routed outmanned Tulane 49-6 on Saturday.

Meyer didn't seem too up or too down on the sideline Saturday but may be more animated next week when Ohio State (4-0) travels to play No. 10 Penn State in the annual "white out" game at Beaver Stadium (Saturday on News 5) that ended in an upset by the Nittany Lions two seasons ago.

Meyer didn't reveal much about his feelings after Saturday's game, but said the most emotional moment was between the third and fourth quarters when the marching band played "Hang on Sloopy," a longtime tradition at Ohio Stadium.

"It's been that way for seven years now," Meyer said.

"Being able to have him in the locker room, being able to have him, to talk to him, before the game, you miss that not having him ...," said Haskins, who threw five touchdown passes in the first half before giving way to backup Tate Martell. "Being with him before we go out on the field together, the excitement he brings, the energy he brings, it was definitely missed."

Meyer was back this week after serving a suspension for his mismanagement of former assistant Zach Smith, who was accused of domestic violence and other questionable behavior while working under Meyer at Florida and Ohio State.

Meyer was out for blowouts of Oregon State and Rutgers, then sat in front of the TV nervously as the Buckeyes pulled away from then No. 15-TCU in the second half last week to win 40-28. Ryan Day, the co-offensive coordinator/quarterbacks coach, temporarily handled sideline coaching duties.

Haskins was nearly flawless, completing his first nine passes on the way to a 21-for-24 effort for 304 yards before taking a seat in the second half as the Buckeyes backed off the gas and cruised.

Haskins, a third-year sophomore, is among the nation's leaders in touchdown passes with 16 through the first four games and is on track to eclipse J.T. Barrett's school record of 35 set last season.

"Dwayne did very good, but then to throw the ball takes much more than him," Meyer said. "The offensive line protected well and the receivers are playing at a very high level."

Parris Campbell caught Haskins' touchdown passes of 14 and 37 yards in the first quarter. Binjimen Victor, Terry McLaurin and Austin Mack also caught first-half scoring throws. The prettiest might have been the last touchdown, a perfectly placed back-shoulder 14-yarder on which Mack made a falling-down grab.

Campbell, a fifth-year senior, had a career day, catching eight passes for 147 yards and the pair of scores.

Tulane: The Green Wave couldn't find an answer to Ohio State's deadly passing attack and couldn't get anything going offensively, either.

"They're a great, well-coached football team," Tulane coach Willie Fritz said. "They were tuned up and ready to go, and I'm sure having their coach back, all those things might have motivated them a little bit, I don't know. They were on fire early."

Ohio State: Buckeyes delivered a rout for Meyer, rolling another overmatched opponent on the way to the season's biggest game so far next at Penn State.

Ohio State running back Mike Weber left the game in the second quarter with an injury and didn't return. Meyer said Weber "has a little strain on his foot," but should be fine.

Ohio State: Plays at Penn State on Saturday (on News 5).