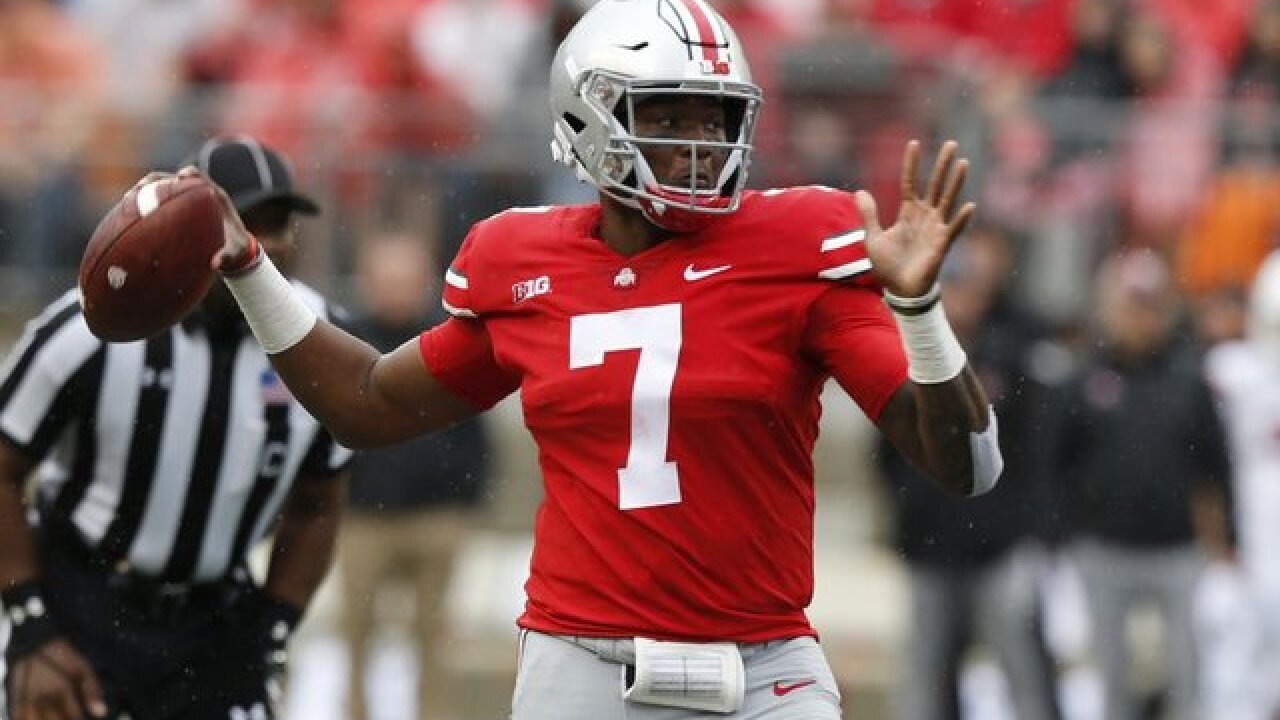 Copyright 2018 Scripps Media, Inc. All rights reserved. This material may not be published, broadcast, rewritten, or redistributed.
<p>FILE - In this Sept. 8, 2018, file photo, Ohio State quarterback Dwayne Haskins looks for a receiver during the team’s NCAA college football game against Rutgers in Columbus, Ohio. Saturday night’s clash between No. 4 Ohio State and No. 9 Penn State for Big Ten East supremacy promises to be an offensively explosive affair. The programs boast the two top scoring offenses in the country through four games, with Penn State averaging 55.5 points and the Buckeyes right behind them at 54.5. They’re also one and two in touchdowns, 31 and 29, respectively. (AP Photo/Jay LaPrete, File)</p>

Saturday night’s clash between No. 4 Ohio State and No. 9 Penn State for Big Ten East supremacy promises to be an offensively explosive affair.

The programs boast the two top scoring offenses in the country through four games, with Penn State averaging 55.5 points and the Buckeyes right behind them at 54.5. They’re also No. 1 and 2 in touchdowns with 31 for Penn State and 29 for Ohio State.

It’s a good look for the Big Ten, which hasn’t been able to claim the top two scoring teams in the country this late in the season in 28 years. The last time two Big Ten teams played each other while holding down the top two scoring spots was 1962, when No. 8 Wisconsin beat No. 1 Northwestern.

Ohio State and Penn State are likely to land multiple punches during a raucous, nationally televised “white-out” game at Beaver Stadium . Las Vegas oddsmakers expect the game to be one of the highest scoring in college football this week, with a total of 71 points.

“This is going to be a 12-round heavyweight fight with a bunch of good, talented players on the field and two teams with sound schemes,” Penn State coach James Franklin said this week. “There’s going to be plays made. We just have to keep battling and keep swinging and stay focused on the goal at hand.”

Saquon Barkley is gone, so Miles Sanders is getting the chance to be Penn State’s featured back. He’s averaged nearly 124 yards per game with five touchdowns. Veteran quarterback Trace McSorley has been an active part of the ground attack, scoring six touchdowns on top of eight passing.

On the Ohio State side, quarterback Dwayne Haskins Jr. has 16 touchdown passes — second in the nation — without having played large chunks of the second half because three of the four games were blowouts. He’s completing 75 percent of his passes and has shown he can throw into narrow windows and rely on Ohio State’s experienced receivers to do the rest. It also helps that he has one of the country’s best running back tandems behind him in J.K. Dobbins and Mike Weber.

“With Haskins, it’s important just to try to make him as uncomfortable as you can, get someone in his face as often as we can and make him get the ball out earlier than he might want to,” Penn State safety Garrett Taylor said. “If we pressure him, we’re going to do well.”

Ohio State coach Urban Meyer has tried to deflect some of the accolades being heaped on Haskins, whose name is starting to come up in Heisman Trophy conversations.

“A quarterback is a production of the offensive line, and they’ve been playing at a very high level,” Meyer said. “They’ve done a very good job protecting Dwayne this year. And other than (the TCU game), we get our hands on a ball, we usually catch it. They’ve been very good at that. Dwayne would be the first one to admit it.”

Penn State avoided an upset from Appalachian State in its opener, then routed Pittsburgh and hung 63 points each on Kent State and Illinois.

The Buckeyes scored 77 against Oregon State in the first week and blew out Rutgers before pulling away in the second half for a 40-28 win over then-No. 15 TCU. Last week, Haskins did most of the damage in the first half before Ohio State backed off the gas and cruised to a 49-6 win over Tulane.

Now comes the most important game on the schedule for the offensively prolific teams.

“Once we get our opportunities, we definitely have to connect and capitalize,” Ohio State receiver Terry McLaurin said. “We could get into a shootout. We have to prepare for that.”