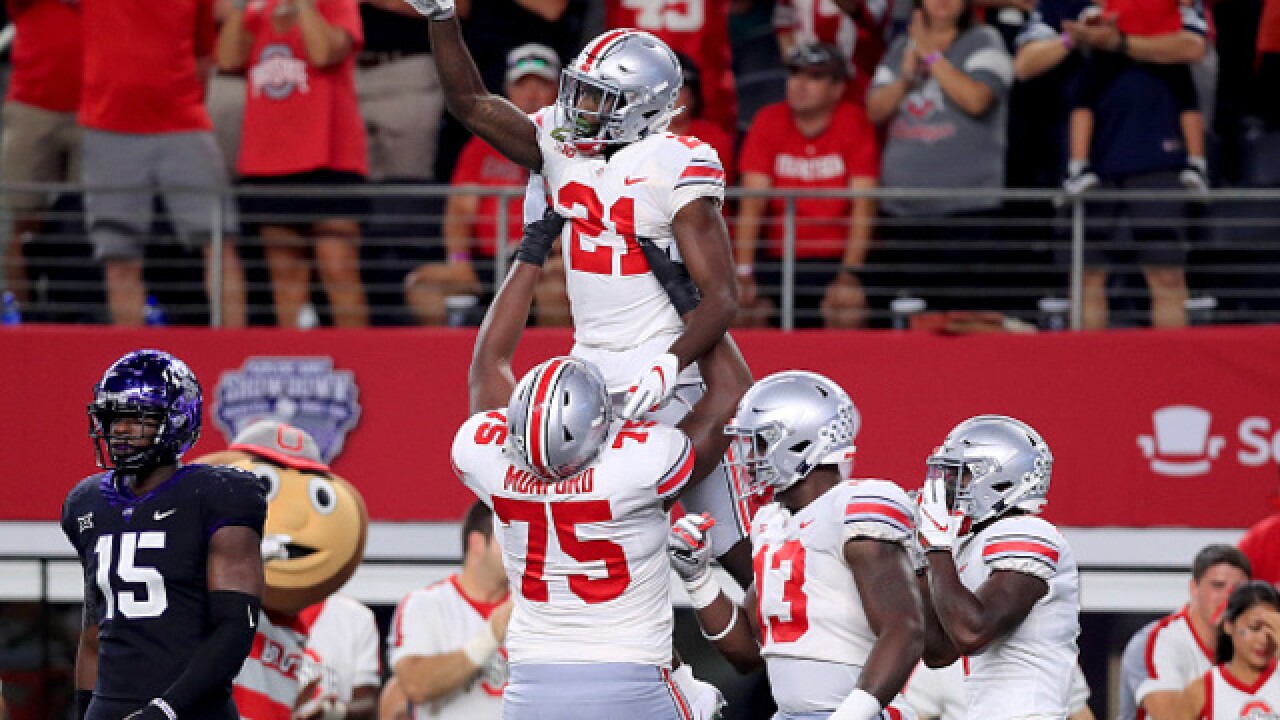 Image copyright 2018 Getty Images. All rights reserved. This material may not be published, broadcast, rewritten, or redistributed.
Tom Pennington
<p>ARLINGTON, TX - SEPTEMBER 15: Parris Campbell #21 of the Ohio State Buckeyes celebrates after scoring a touchdown against the TCU Horned Frogs during The AdvoCare Showdown at AT&T Stadium on September 15, 2018 in Arlington, Texas. (Photo by Tom Pennington/Getty Images)</p>

Here’s what to watch in the Big Ten this week:

No. 8 Ohio State at Maryland.

This season has been plain weird for the Buckeyes (9-1, 6-1, No. 10 CFP) with all the off-field distraction and uneven on-field performances. Yet they’re still in line to play for the Big Ten championship if they take care of business at Maryland (5-5, 3-4) and win “The Game” against Michigan for the seventh straight year. The two-touchdown-underdog Terrapins are short-handed. Tyrrell Pigrome will start at quarterback after Kasim Hill tore the ACL in his left knee last week against Indiana, and injured running backs Ty Johnson and Javon Leake are game-time decisions.

Devine Ozigbo is on the cusp of becoming Nebraska’s first 1,000-yard rusher since 2014 and combines with Adrian Martinez and Maurice Washington to average better than 200 yards a game. Michigan State is holding opponents to a nation-low 76.5 rushing yards per game and 2.6 yards per carry. Nebraska right tackle Matt Farniok figures to have his hands full with defensive end Kenny Willekes, who had career highs of 13 tackles and 3.5 for loss against Ohio State last week.

National rushing leader Jonathan Taylor of Wisconsin has gone over 100 yards in nine games, the most by an FBS player, and averages 154.8 yards per game. ... Purdue goes into its game against Big Ten rushing leader Wisconsin having allowed a season-high 265 rushing yards to Minnesota. ... Michigan, which hosts Indiana, hasn’t lost to the Hoosiers since 1987 and lead the series 57-9. ... Michigan has outscored opponents 182-66 in first halves and 188-63 in second halves. ... Penn State has clinched its 14th consecutive winning season and has won nine straight meetings with this week’s opponent, Rutgers. ... Rutgers is yet to score more than 17 points against a power-five opponent. ... In November games, Illinois leads the nation in rushing yards (813), yards per carry (9.68) and rushing touchdowns (10).

Minnesota is 2 1/2-point underdog at home to Northwestern.

The Gophers (5-5, 2-5) are a bit of a mystery, beating Purdue by 31 points last week after getting beaten by 24 at Illinois the week before. Northwestern (6-4, 6-1) locked up the West Division title at Iowa last week. The Wildcats have had to grind to get where they are, and it will be interesting to see if there is some letdown now that their ticket is punched for the Big Ten title game. The Gophers have an opportunity to get bowl eligible before heading to Wisconsin to play for the Axe.

Fant is at the center of the West Division’s biggest soap opera heading into the Hawkeyes’ game at Illinois. Arguably the nation’s best eight end, he inexplicably was on the sideline for all but eight snaps in the second half as the reeling Hawkeyes tried to come back against Northwestern. Unknown is what’s going on between Fant and the staff. What’s known is the junior is a projected early-round NFL draft pick if he chooses to leave school.