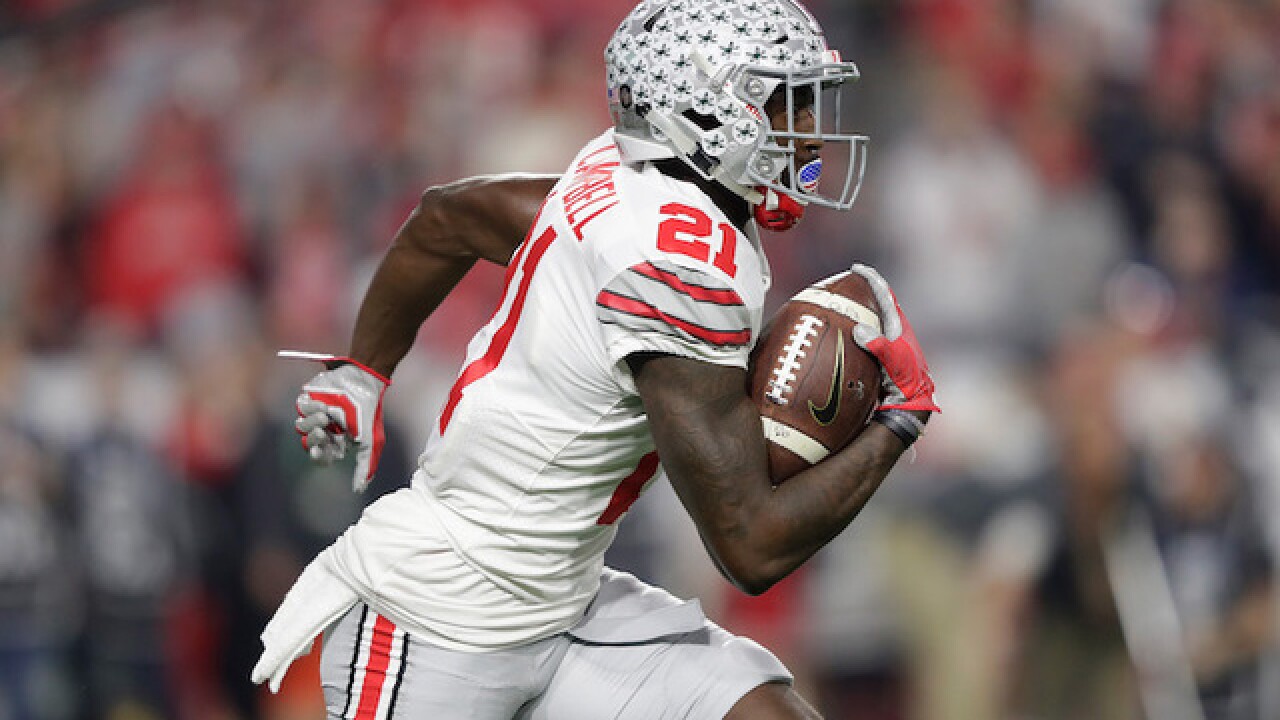 Copyright 2018 Scripps Media, Inc. All rights reserved. This material may not be published, broadcast, rewritten, or redistributed.
Jamie Squire
<p>GLENDALE, AZ - DECEMBER 31: Parris Campbell #21 of the Ohio State Buckeyes runs with the ball against the Clemson Tigers during the 2016 PlayStation Fiesta Bowl at University of Phoenix Stadium on December 31, 2016 in Glendale, Arizona. (Photo by Jamie Squire/Getty Images)</p>

COLUMBUS, Ohio (AP) — During spring practice, coach Urban Meyer said Ohio State has failed to put an “elite” group of receivers on the field since the 2014 national championship squad that featured the likes of Devin Smith and Michael Thomas.

This season’s experienced corps of receivers heard about the dig, of course, and is considering it a challenge.

“He’s not only saying that to (the media), he’s saying that to us as well,” senior H-back Parris Campbell said in the spring. “He kind of wants us to get defensive about it.”

All the ingredients are in place for Buckeyes receivers to break out — a pass-first quarterback in Dwayne Haskins Jr., decent depth and experience on the offensive line, and a scary-good running game to balance the offense.

It’s still undetermined if Meyer will be their coach. The school is investigating his handling of domestic-abuse allegations against former assistant coach Zach Smith.

All six of last year’s top receivers are back for 2018. They collectively accounted for 2,683 receiving yards and 29 touchdowns last season. Campbell led the way with 594 yards and three scoring grabs. Still, not a single receiver has yet emerged as the reliable deep threat Meyer has been wishing for the past two seasons.

Now comes Haskins, a pro-style passer with a better arm than predecessor J.T. Barrett. He’s more likely to try a precision throw down the field into coverage than pull it down and run. Running worked well enough for Barrett, but it’s not Haskins’ thing.

The idea that Ohio State could be a pass-first team excites the receivers.

“The mentality is we’ve got a veteran group, everybody’s coming back and we want that weight on our shoulders,” said senior Terry McLaurin (436 yards, six touchdowns in 2017), who with Campbell is a returning captain.

All have flashed star potential at one time or another. Seeing the rifle-armed Haskins at the controls gets them excited.

“If it doesn’t, you shouldn’t be playing,” Dixon said. “We’re looking forward to it.”

Former Buckeye and NFL player Brian Hartline replaced Smith as receivers’ coach. Smith was fired last month after revelations of domestic violence allegations against his wife. The university put Meyer on administrative leave while investigating his handling of the accusations. University trustees will meet Wednesday to discuss the findings of the investigation and Meyer’s future.

Because of the investigation, Ohio State players and coaches have been off-limits for interviews. The Buckeyes open the season Sept. 1 at home against Oregon State.

Veteran leadership will be needed.

“We’re the most experienced group on the team right now,” Campbell said. “We know that coming in, since we’ve got a new quarterback, some new offensive line positions, we’re going to be valuable to the offense.”