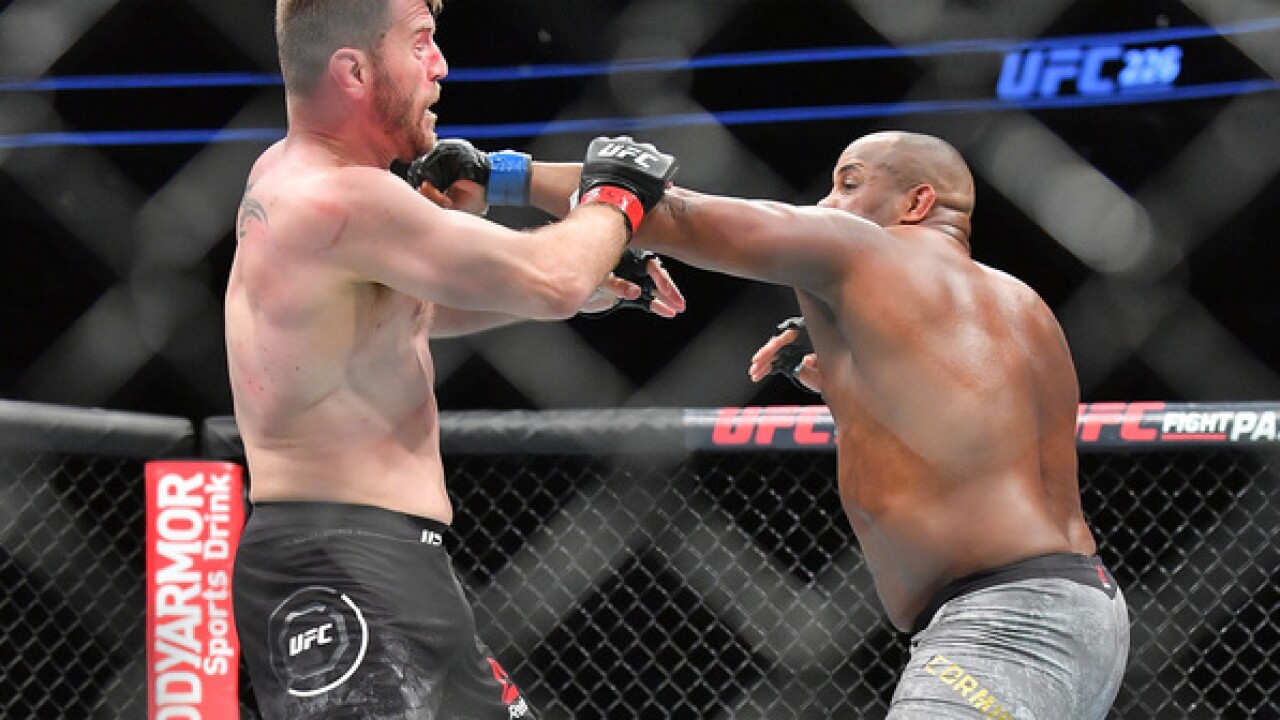 Daniel Cormier knocked out the UFC heavyweight champion, argued with a professional wrestler and left the octagon dancing with glee and perfect balance, thanks to one championship belt on each arm.

There will never be another Saturday night like it for the 39-year-old former amateur wrestler who stands on the pinnacle of the UFC.

Cormier added the heavyweight championship to his light heavyweight title when he stopped Stipe Miocic in dramatic fashion during the first round of their superfight at UFC 226.

Tonight wasn’t my night. I’m feeling good. Thanks to all my fans for the support. Love you guys! See you back in The Land! pic.twitter.com/D2KUR4ex4d

Late in a lively opening round, Cormier (21-1, 1 no-contest) abruptly flattened the UFC’s long-reigning heavyweight kingpin with a right elbow out of a clinch. He finished Miocic (18-3) on the ground with 27 seconds left in the round, landing several shots to the defenseless champion’s head.

Cormier became the second fighter in UFC history to hold two championship belts simultaneously. Conor McGregor was the UFC’s featherweight champ in 2016 when he took the lightweight title from Eddie Alvarez.

“I was a heavyweight for a long time, and I left the division,” Cormier said. “I never knew what I could become, but tonight I got the answer. I’m a two-division champion, baby!”

Cormier is on top of it with less than a year to go until reaching his self-imposed retirement age of 40.

“I’m 39 years old, and I’ve been second many times,” Cormier said. “But today, I have accomplished everything I ever wanted. From crying in this octagon almost a year ago, to leaving as the heavyweight champion.”

Cormier’s 5-inch height disadvantage and 8-inch reach disadvantage against Miocic proved to be no problems — and he actually weighed a few pounds more than Miocic at weigh-ins on Friday.

“In our studying, we knew Stipe would back out of the clinch a little bit with his hands low, so I worked on that,” Cormier said. “I spent all camp knocking out my training partners, and today I got to do it in the octagon.”

Cormier’s move up to challenge Miocic was only the third superfight in UFC history between reigning champions of two weight classes. Welterweight champ Georges St. Pierre defended his belt in 2009 by battering lightweight champ BJ Penn, and McGregor accomplished his feat less than two years ago in his most recent MMA fight.

UFC President Dana White said the result confirms Cormier is “one of the best of all time. ... It finally gives him the respect that he deserves. It couldn’t happen to a better guy. I said to him, ‘If you’re the champion for the rest of my career, I’ll be a happy man.’”

After beating Miocic, Cormier engaged in a bit of clearly planned theatrics with Brock Lesnar, the professional wrestler and former UFC heavyweight champion. Cormier called Lesnar into the cage, and Lesnar shoved Cormier in the chest while the fighters traded insults to hype a potential future bout.

“Push me now, (and) you’re going to sleep later,” Cormier yelled at Lesnar. “Your days are in the past. In the stone age.”

Lesnar, likely the biggest pay-per-view draw in UFC history, is widely expected to return to MMA early next year. White confirmed he’ll book Cormier against Lesnar as soon as Lesnar has completed the requisite drug testing, but Cormier said he would like to defend his 205-pound title later this year before fighting Lesnar.

Cormier was a heavyweight amateur wrestler before his late-starting MMA career. He won the Strikeforce heavyweight title before leaving the division when he joined the UFC because he didn’t want to fight Cain Velasquez, his training partner and the former UFC heavyweight champ.

But Cormier provided all the fireworks necessary with his demolition of Miocic, who had held the heavyweight belt for over two years. Miocic was the most dominant heavyweight champion in the history of the UFC’s most tumultuous division, defending his belt a UFC-record three times.

The Cleveland firefighter hadn’t lost since December 2014 and hadn’t been stopped since September 2012.

The show capped the UFC’s annual International Fight Week in early July in its hometown. For the fourth consecutive year, the weekend’s pay-per-view card lost a major fight when featherweight champion Max Holloway was ruled out of his title defense with Brian Ortega due to symptoms of an apparent concussion .

Lewis (20-5) earned an easy decision victory practically by default when Ngannou (11-3) seemed uninterested in engaging amid heavy boos. Ngannou, who landed a paltry 11 strikes over three rounds, was thought to be the UFC’s next heavyweight force before Miocic dominated him in January.

“I think his ego ran away with him, big-time,” White said. “The minute that happens to you in the fight game, you see what happens. You start to fall apart. I had some personal encounters with him, and this guy’s ego was so out of control.”

The sometimes outrageous Perry (12-3) ended a two-fight skid with a disciplined, punishing performance against Felder (15-4), who hung in despite seriously injuring his right forearm and getting a frightening cut near his left eye. Both fighters were covered in Felder’s blood by the final bell.

Former lightweight champion Anthony Pettis also submitted Michael Chiesa in the second round with a triangle armbar from a bottom position. Pettis (21-7) won for just the third time in eight fights since 2014.

Earlier, unbeaten Brazilian middleweight Paulo Costa stopped Uriah Hall in the second round of a jaw-dropping slugfest between two of the sport’s hardest punchers.