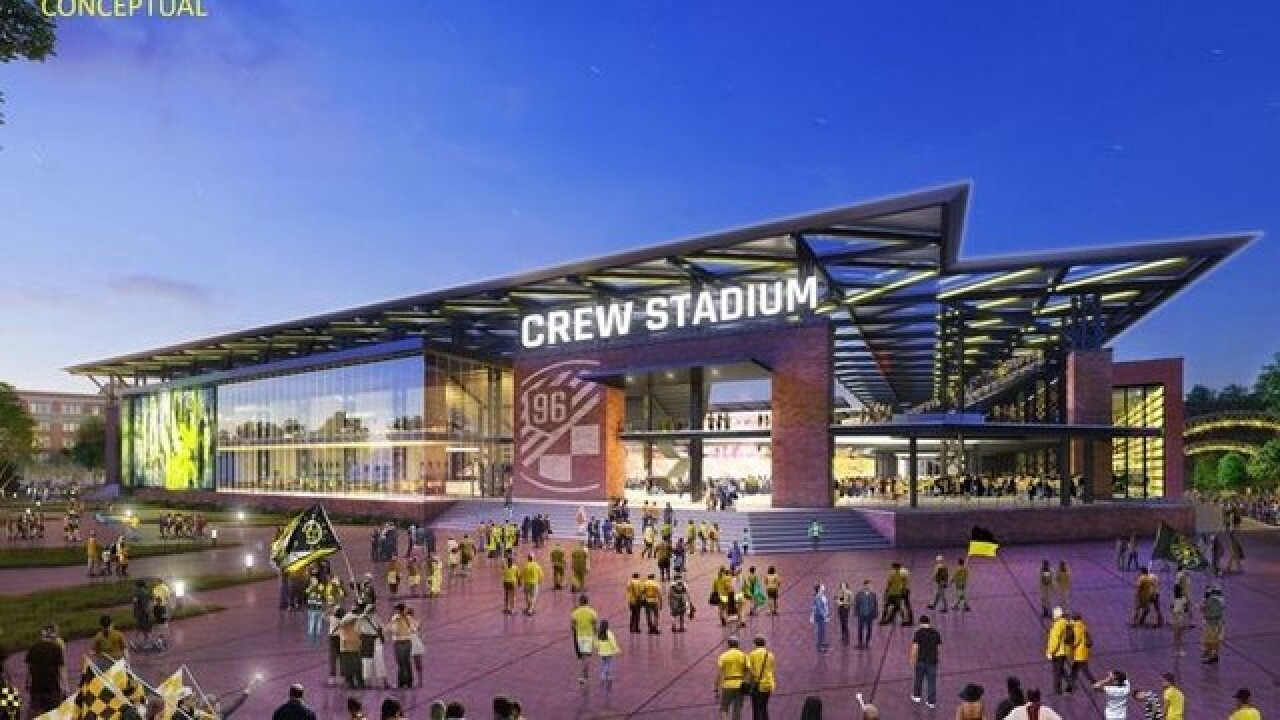 Copyright 2018 Scripps Media, Inc. All rights reserved. This material may not be published, broadcast, rewritten, or redistributed.
<p>Conceptual image of the planned Columbus Crew stadium. (Source: Columbus Partnership and WSYX)</p>

Plans were revealed Thursday for a new Columbus Crew stadium being developed adjacent to the downtown Arena District neighborhood in Columbus by an ownership led by Browns owners Dee and Jimmy Haslam.

The proposed Confluence Village is planned on 33 acres next to the Arena District neighborhood, with 13 acres slated for the $230 million, 20,000-seat soccer stadium, according to a news release from the Browns.

Confluence Village would also include 885 residential units and 270,000 square feet of private commercial and office space that can accommodate up to 1,300.

“This is the next step in what some may have thought was an impossible dream,” said Alex Fischer, President and CEO of the Columbus Partnership. “Today’s announcement showcases our community’s commitment, in partnership with the Haslam and Edwards Families, to MLS soccer in Columbus. The creativity behind this one-of-a-kind public-private partnership brings together a vision for a new stadium with a broader community development plan. Columbus will be the national standard-bearer of what defines collaborative relationships between professional sports teams and their communities.”

The Columbus City Council announced part of the plan must include transforming the Crew’s current home, the MAPFRE Stadium, into a Columbus Community Sports Park, a shared-use center with an indoor soccer field and basketball courts, athletic fields and programming spaces, the release states.

“We are excited about the possibilities of new ownership of the Columbus Crew and all that will bring to the City,” Columbus Mayor Andrew Ginther said. “Part of that plan must include reimagining the existing stadium, so we are investing in a community sports complex that will serve the people of Columbus. Nearly 200,000 residents live within three miles of this location. It will benefit residents of all ages and strengthen the connection between the soccer club and the City.”

“We are thrilled with the tremendous progress that has been achieved in this short period of time to keep the Crew in Columbus while creating a long-term plan that will greatly benefit the community. The vision for a shared community sports park is especially exciting as the opportunity to more deeply engage Columbus youth with soccer and other sports is so valuable. We are also very excited about the robust activities and possibilities for Confluence Village, which will be the latest transformative development in the vibrant Arena District neighborhood. We are continuing to work through design elements and a neighborhood vision for the future home of the Crew. Our goals, along with those of the Columbus Partnership, HNBT and MKSK, are focused on creating a community asset that reflects the unique personality of Columbus, is a terrific soccer environment and creates wonderful opportunities for the community to utilize the sporting complex year-round in a variety of ways. We greatly appreciate the collaborative efforts of Mayor Ginther, City and County leaders, the Columbus Partnership and Major League Soccer.”

“We continue to be very encouraged with the significant progress made in Columbus by the Haslam and Edwards families and the Columbus Partnership. To ensure the long-term success of Crew SC, and for the Club to remain in Columbus, a critical component of our discussions has been plans for a new stadium, as well as increased fan and corporate support.  We hope to see these essential elements finalized soon.  While there is work to be completed, we commend Mayor Ginther, Alex Fischer, the City, the County, and all who are engaged in this process, which we believe will deliver great benefits to Crew fans and the Columbus community for generations to come.”