Electronic whistles, face coverings and gloves may be a familiar sight on high school sports officials this fall 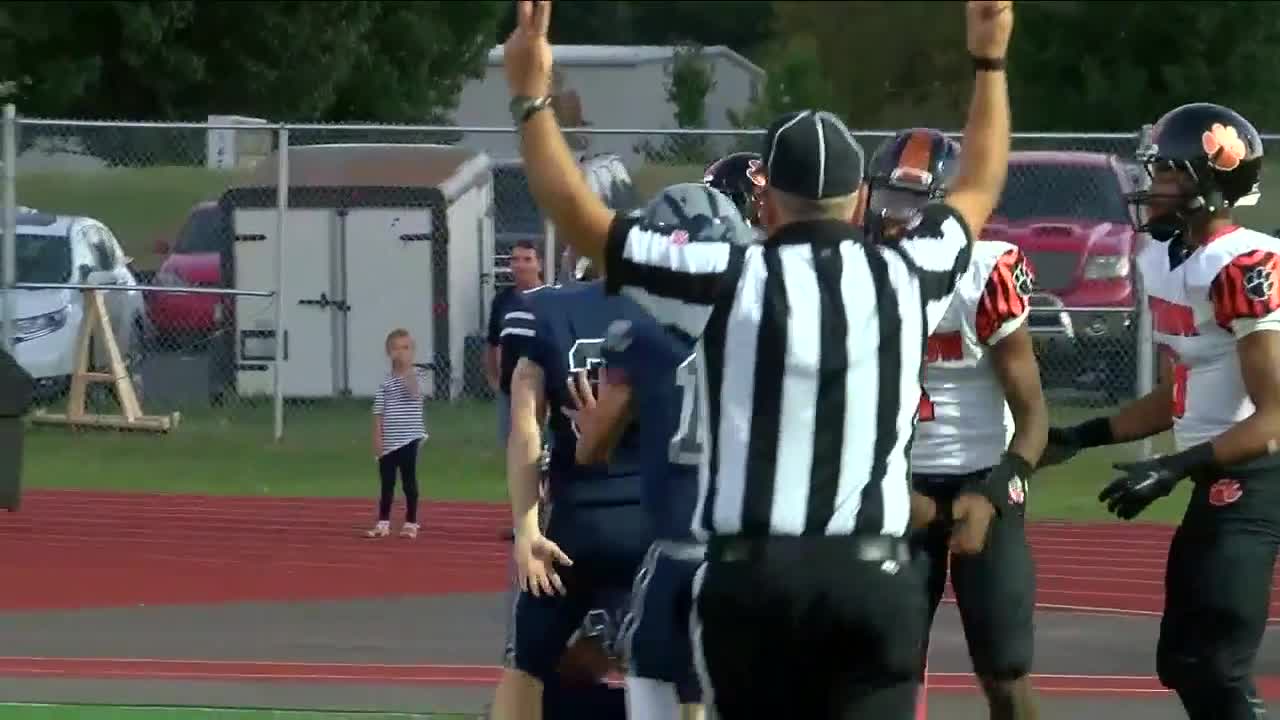 The Ohio High School Athletic Association is discussing strategies on how to help high school sports officials remain healthy during the COVID-19 pandemic.

Bobby Sagers Jr. would like answers about officiating high school sports during the COVID-19 pandemic this school year.

"My big thing is obviously the social distancing, handling the ball -- football and/or basketball and then obviously the whistle to your mouth -- talking about can you wear a mask and referee?" Sagers said. "I don't know. We're in no man's land. Will a coach have a mask on the sidelines?"

"I think everybody is kind of in that same scenario where it's the virtual unknown," Gamble said.

While plenty of discussions are still being conducted through the governor's office and at the OHSAA, the National Federation of State High School Associations (NFHS) recently sent guidance to state associations about officiating.

The considerations aim to decrease potential exposure to respiratory droplets by encouraging social distancing, limiting participation in administrative tasks to essential personnel and allowing for protective equipment in all sports.

The guidance includes uniform regulations that permit the use of air horns, electronic whistles, cloth face coverings and gloves.

There is also guidance on pregame conferences, the coin toss and the suspension of handshakes in pregame and postgame ceremonies.

"We're in communication with our officials groups as much as possible," NFHS executive director Dr. Karissa Niehoff told WCPO. "And we wanted to get the guidance out there so that they can feel we are paying attention to them as well. And they have some authority to try to implement things differently and here's some suggestions for how to do that."

Ben Ferree, OHSAA's assistant director of officiating and sport management, said the OHSAA is discussing safety issues for the 14,651 officials who were registered at the end of the 2019-20 school year.

"The goal for our organization right now is to give people options," Ferree said. "We are not a state-run organization. We have no affiliation with the government so we don't make mandates. We follow the governor's orders and recommendations just like the rest of the state does."

Ferree said it's a given there won't be any pregame or postgame handshakes.

But the OHSAA also has looked into how to safely conduct the coin toss and meetings with captains and locker rooms or classroom space for officials to change.

While the OHSAA waits for the governor's office to determine when contact sports teams may travel to other schools for preseason scrimmages this summer, there is a July 15 deadline for officials to renew their license for the fall sports season.

With 50 as the average age of an OHSAA official, there is concern that some individuals in a potential high-risk category for the virus may not renew or simply not return to work as many games this fall.

"For officials, especially ones that have been around for a while, that's a tougher decision because if you are over 50 years old and have some type of condition -- whether it's a heart condition or respiratory issues, whatever -- you've got a tough decision to make," said Lakota West athletic director Scott Kaufman, who is the incoming vice president of the OHSAA board of directors.

"I don't know that that decision they have to make would prevent them from renewing their license. We just don't know the impact yet on whether or not they would go forward and take a fall schedule."

The officiating license for fall sports ($60 for one sport with $30 for additional sports) typically has a June deadline, but the OHSAA extended it to mid-July due to the pandemic. Winter sports officials can renew through September and spring sports have until December.

The amount of renewals by July 15 is also important because the number of officials continues to be on an overall downward trend of about a 2% loss per year, Ferree said. This past school year saw 2,000 fewer officials overall than in 2010-11.

"Our concern is that perhaps the pandemic might accelerate that," he said. "Maybe someone who was considering retiring might say, 'Yeah, you know this is probably a good time,' which could leave us with a shortage sooner than we had hoped to face it."

Niehoff said officials who are returning are likely eager after how the winter and spring seasons were impacted by the pandemic.

"A number of them are going ahead and getting certified for the fall because if there is not high school sports at least there are youth sports that are happening and they can work those levels as well," Niehoff said.

John Browne, who is entering his 20th year as an OHSAA football official, can't wait to get started this summer.

"All my guys on my crew, we chat and we're all in it," Browne said. "We're prepared for a full season. We've got our scrimmages all lined up."

Browne's approach is encouraging for the NFHS and OHSAA, both of which carried a public relations campaign in recent years to try to change adult behavior at games and events.

Adult behavior was often cited as a significant reason why numbers are dwindling in officiating.

Now, the primary concern is how to engage officials and address their health concerns during a pandemic.

The future of athletic contests is at stake.

"Officiating is important both in quality and in quantity," Ferree said.

"At the most basic level, if there aren't enough officials, the games don't get played. Per OHSAA regulations, you have to have officials on the game. Beyond that, for insurance liability if you don't have independent, verified and registered officials on the games, you're not going to be covered by insurance should someone get injured or anything along those lines."