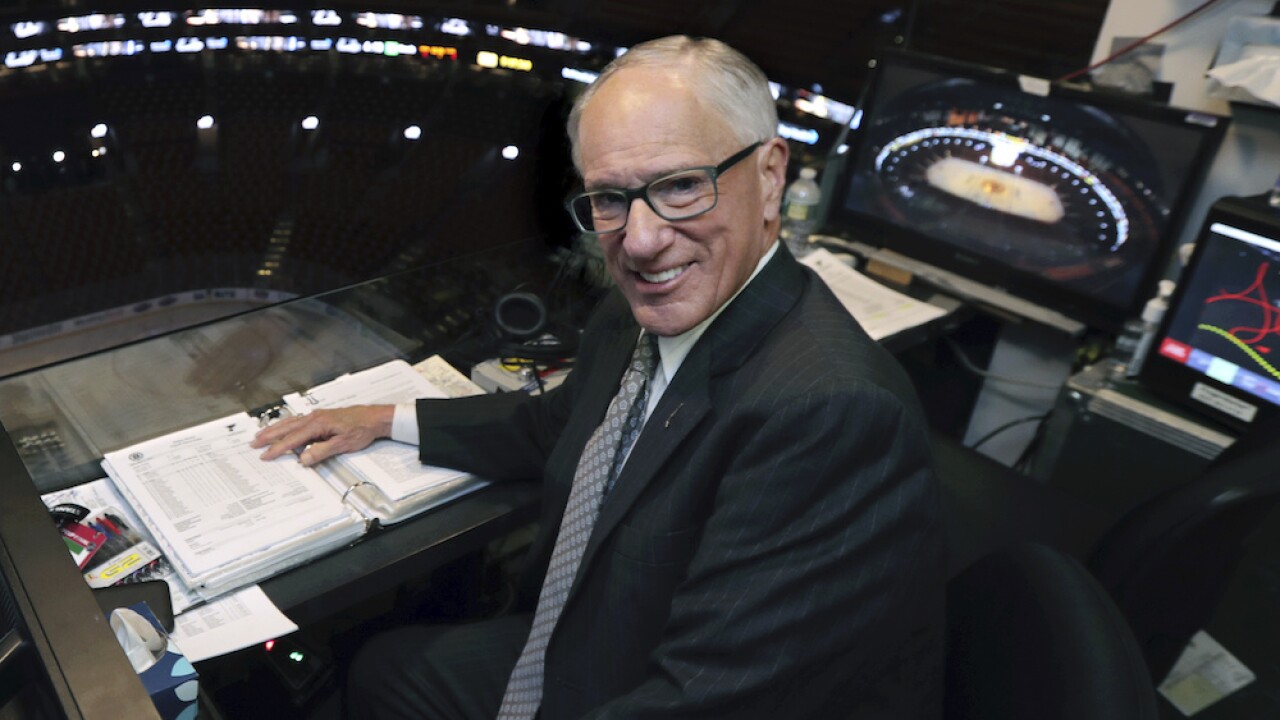 Copyright 2019 The Associated Press. All rights reserved
Charles Krupa/AP
In this Wednesday, May 29, 2019, photo, NBC hockey broadcaster Mike Emrick poses for a photo while preparing to call Game 2 of the NHL hockey Stanley Cup Final between the St. Louis Blues and the Boston Bruins in Boston. At 72, still calling games on the NHL’s biggest stage, Emrick is in his prime and showing no signs of slowing down and stepping away from broadcasting the fastest game on ice. “I really wanted to do it from the time I saw my first game, but a lot of people really want to do something and they don't get to,” Emrick said. “When you have a job like that, you're never working the rest of your life. So it's been 46 years. I don't know when it'll end. God only knows.” (AP Photo/Charles Krupa)

Mike "Doc" Emrick, the legendary NHL broadcaster who has been calling hockey games for decades, is retiring. The New York Post was the first to report his retirement.

“I hope I can handle retirement OK,” Emrick told the New York Post Sunday night. “Especially since I’ve never done it before. But I’ve just been extremely lucky for 50 years. And NBC has been so good to me, especially since the pandemic, when I was allowed to work from home in a studio NBC created."

Emrick, who has been broadcasting hockey for 47 seasons, has been the lead play-by-play voice for national NHL broadcasts in the U.S. on Versus and NBC since 2005. He has called 13 Stanley Cup Finals and was inducted to the U.S. Hockey Hall of Fame in 2011, the first member of the media to be inducted.

He was also the recipient of the Hockey Hall of Fame Foster Hewitt Memorial Award for outstanding contributions to hockey broadcasting in 2008.

After 3,750+ Professional and Olympic hockey games, 100 different verbs used to describe a pass or shot, and 22 Stanley Cup Finals, the legendary Mike "Doc" Emrick has announced his retirement from broadcasting.

From hockey fans around the world, we say #ThankYouDoc! pic.twitter.com/Pt27Dp63TW

Emrick, 74, lives in St. Clair Michigan and began his play-by-play career in Port Huron with the Port Huron Flags.

During the NHL Lockout in 2013, he called a 12-year-old girls hockey game to the delight of hockey fans across the country.

This story was originally published by WXYZ in Detroit.