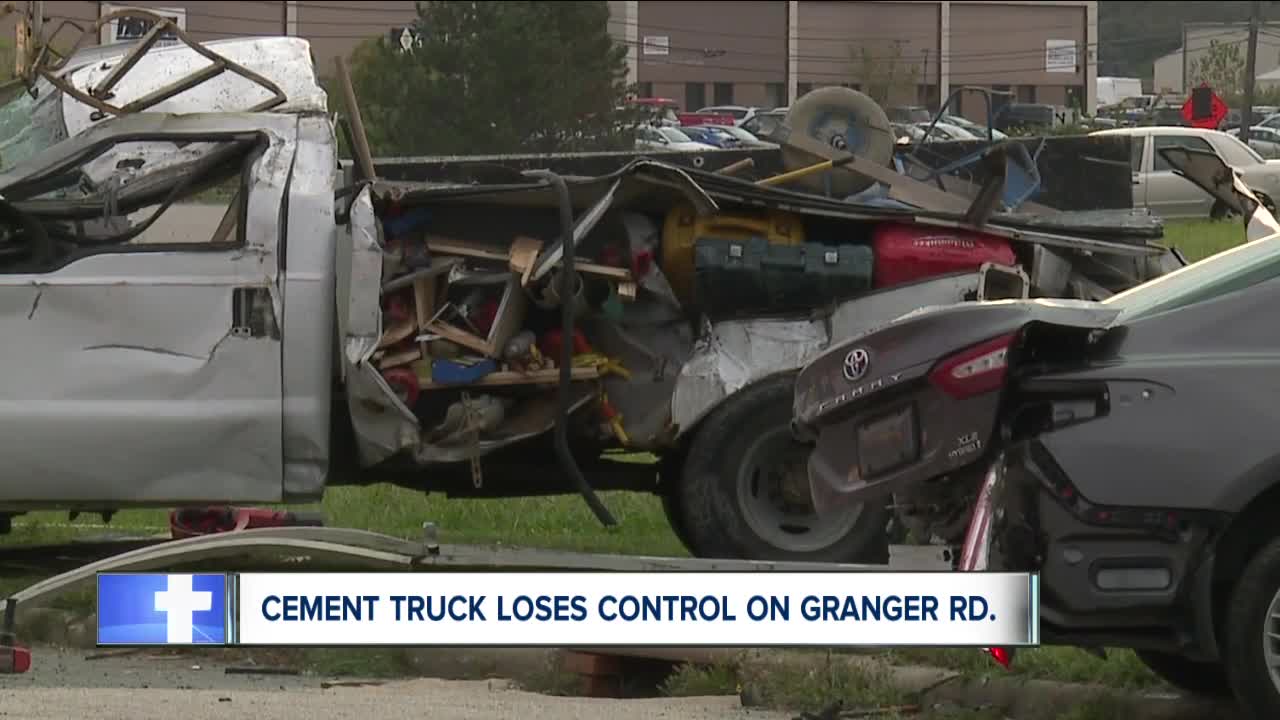 A cement mixer that apparently lost control careened into more than a half-dozen vehicles on Granger Road in Valley View on Thursday morning, injuring four people. 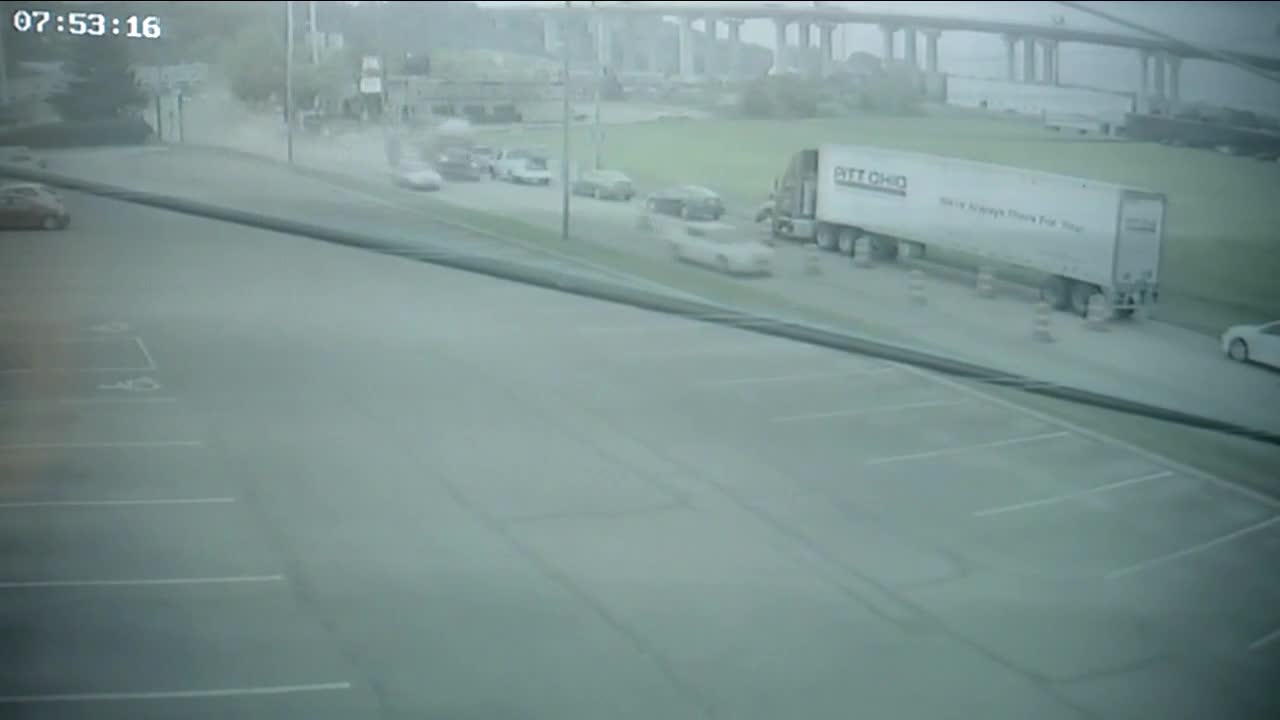 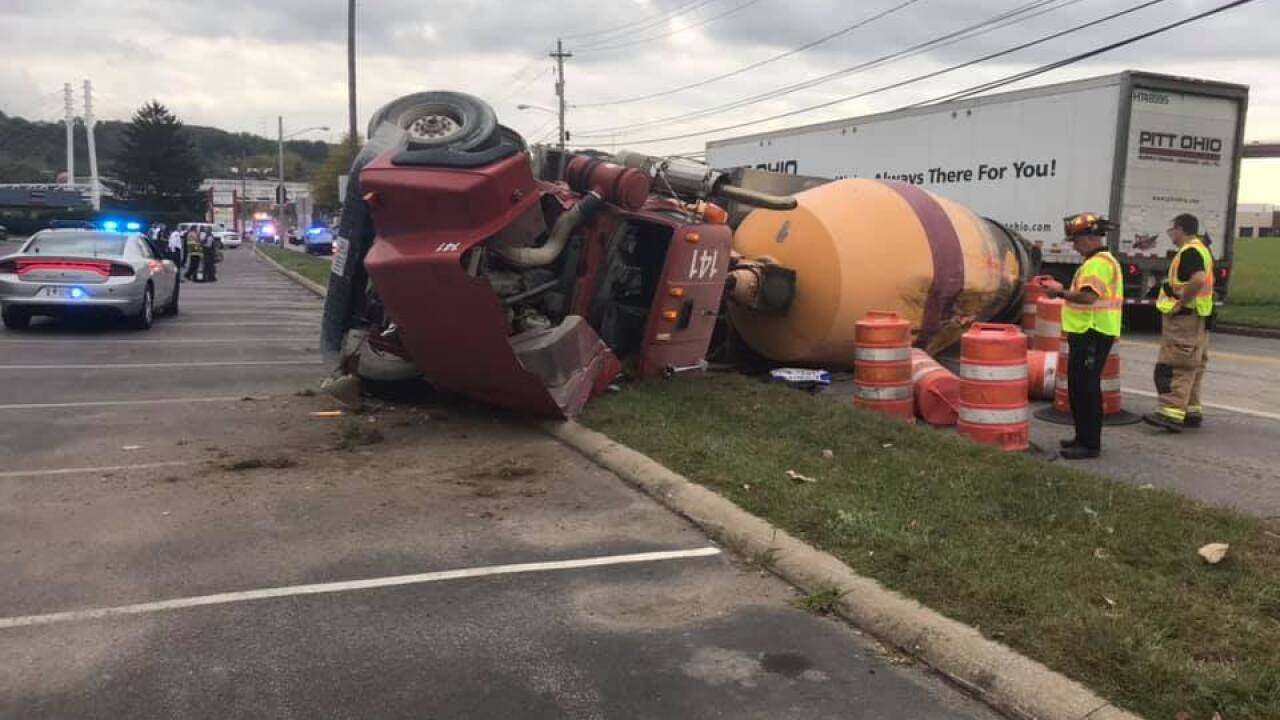 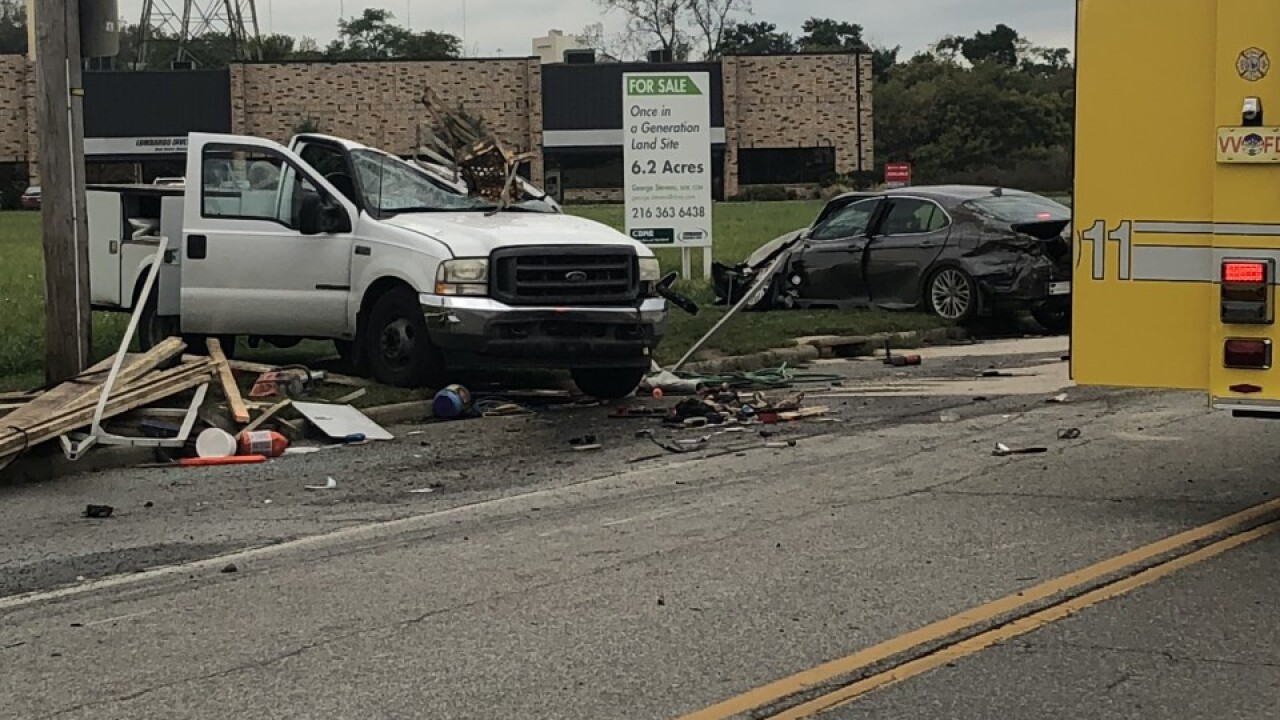 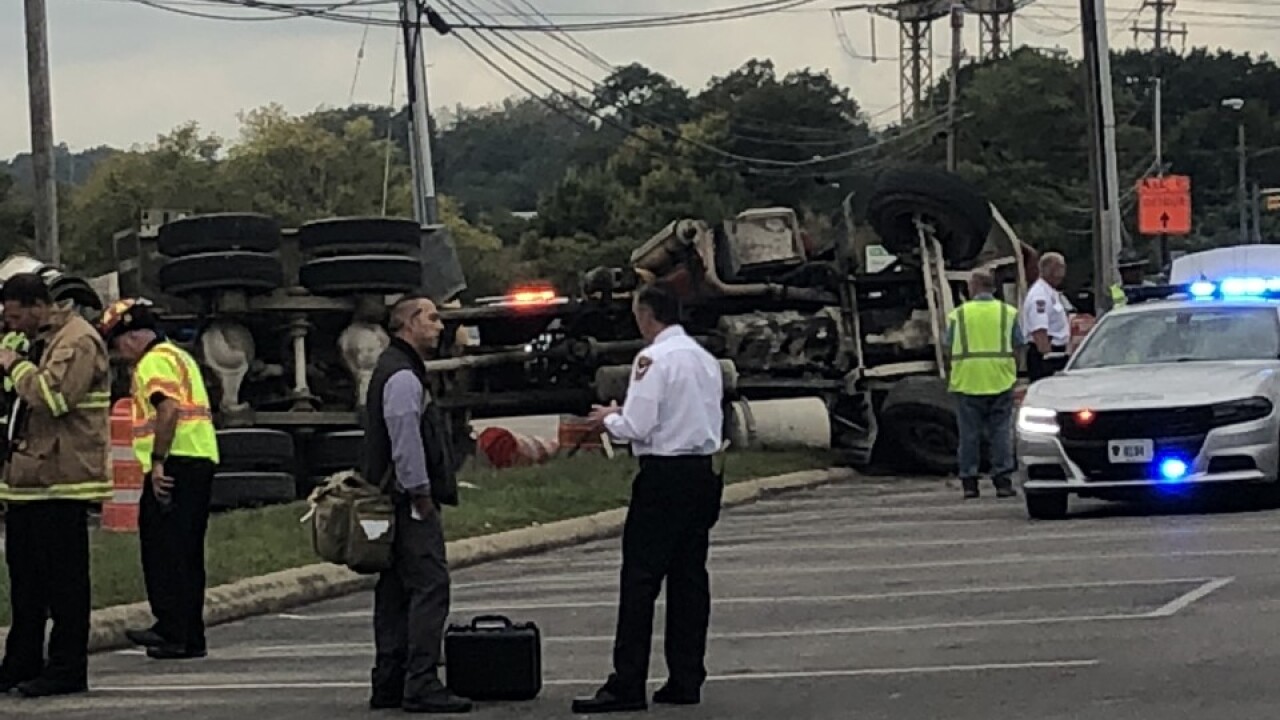 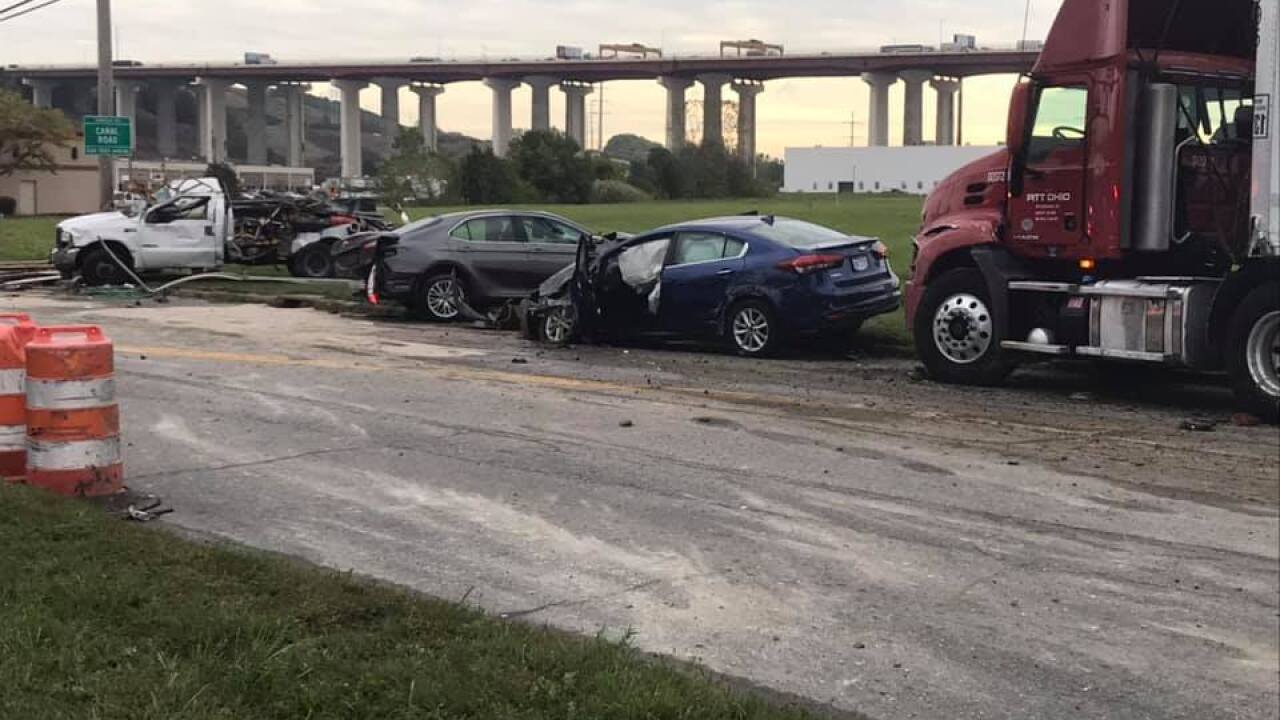 VALLEY VIEW, Ohio — A cement mixer that apparently lost control careened into more than a half-dozen vehicles on Granger Road in Valley View on Thursday morning, injuring four people. Although Valley View police and the Ohio State Highway Patrol’s Motor Carrier Enforcement Unit are investigating the cause of the crash, it appears the driver of the cement mixer lost control while traveling down the steep grade of the Granger Road hill, an eerily similar scenario to what happened in 1976 when eight people were killed.

The crash happened shortly before 8 a.m. Thursday near the intersection of Granger and Canal roads. Traffic was detoured away from Granger Road for more than five hours while crash investigators and large wreckers worked to process and clean up after the crash.

According to surveillance video from a nearby property management company, the driver of the cement mixer, which police said had a full load, appeared to still be traveling at a high rate of speed when it tried to swerve to away from westbound traffic. However, the cement mixer began to twist and eventually careened into eastbound traffic, which was stopped at the red light. The cement mixer pin balled and sideswiped seven vehicles, police said, and left two people with serious injuries before it chewed up a huge divot in the grassy median.

If the cement mixer had successfully careened to the right, it is likely the large truck could have plowed into the neighboring strip mall where Tina Piatek, an employee of Deanatella’s Italian Foods, was working.

“I was filling the Coke cooler and I heard a big crash. By the time I turned around, the cement truck was on its side and it was sliding down the street,” Piatek said. “I called 911 and I cried. Yeah, I was pretty shaken up.”

Law enforcement is now tasked with determining whether the crash was a result of driver or mechanical error. OSHP’s motor carrier enforcement unit will be testing the cement mixer’s mechanical systems as the investigation progresses. The extent of the other victims injuries is not known.

The Granger Road hill, which is about a mile east of where the accident happened, spans three-quarters of a mile and features of the steepest grades in Northeast Ohio. Cutting through the dense tree lines in the shadow of the Valley View Bridge, the busy corridor is marked with signage warning truck drivers of the steep grade and the need for them to switch to a lower gear.

The signage was installed in response to a horrific crash on August 20, 1976 that killed eight people. According to a National Traffic Safety Board report, the driver of a semi-tractor trailer went out of control while descending the steep 10 percent grade on State Route 17 (Granger Road). The semi-truck’s braking system failed, turning the vehicle into multi-ton battering ram.

The truck eventually collided with nearly a dozen vehicles that were stopped at the red light, hurling some of them into the canal below. The crash also sparked massive fire. In total, eight people were killed and 15 people were injured.

News 5 reports at the time described it as one of the worst traffic crashes ever to occur in Cuyahoga County.

“There was an explosion. I see flames shooting up,” one witness to the 1976 crash said. “When I got here, It was just a massacre. There wasn’t much anybody could ever do. I saw one guy in the street. I just turned away and said bless your soul. There wasn’t much else I could do.”

The outcry following the accident prompted leaders from the Village of Valley View to implement a ban on large trucks on Granger Road because of the steep descent. However, at some point, the ban was overturned because only the state has jurisdiction over a state route, officials said. News 5 has reached out to ODOT for clarification on when the ban was overturned and for what reason.

Like it does after every serious crash, a spokeswoman said ODOT is currently reviewing the information its gathering from Thursday’s crash to determine whether additional safety improvements can and should be implemented. The number of crashes involving large trucks on Granger Road remains unclear, although the police chief of Valley View told News 5 that a crash involving a large truck occurred earlier this month when the driver lost control. That crash, however, occurred in the early morning hours and did not result in any injuries.