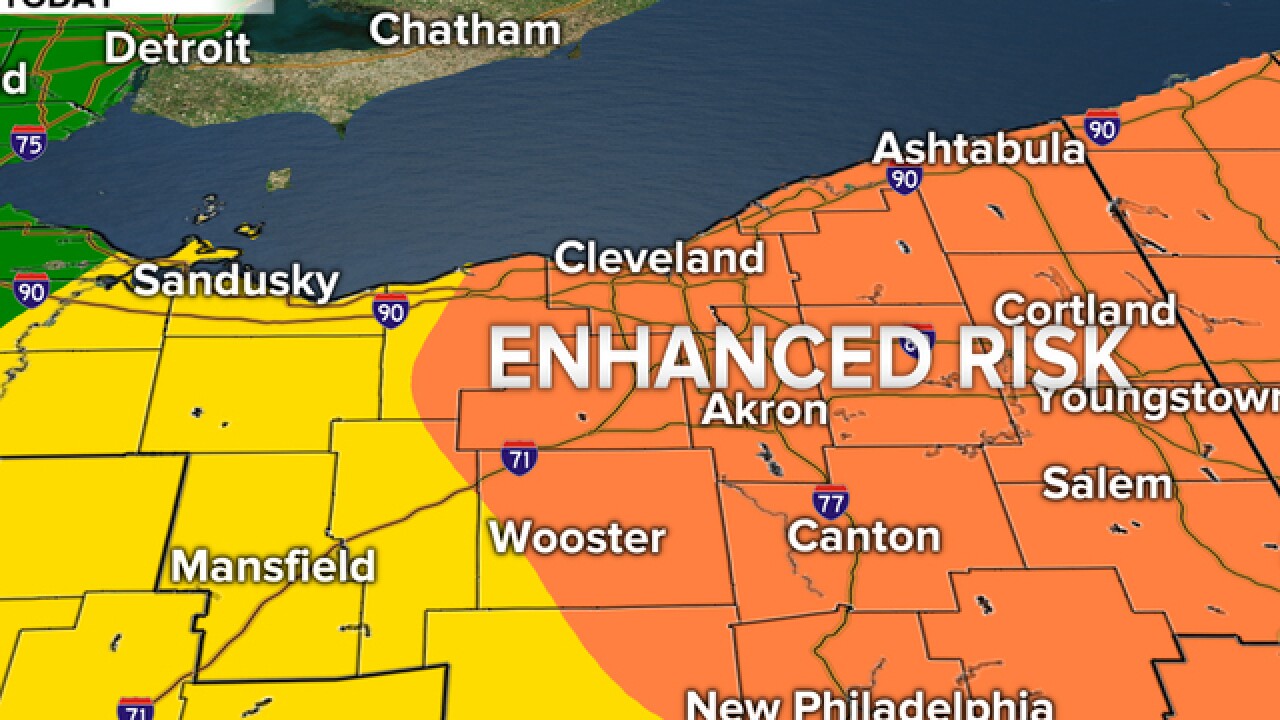 There is an enhanced risk for severe storms across northern Ohio Friday afternoon and early evening, according to the Power of 5 Weather Team.

A strong cold front will meet extremely warm, moist air across Northern Ohio Friday afternoon. This will cause a line of strong storms to form and move quickly east across our area by late afternoon.

The National Weather Service has issued a Severe Thunderstorm Watch for a large part of Ohio as well as parts of Pennsylvania and West Virginia until 11 p.m.

A severe thunderstorm watch has been issued for parts of Ohio, Pennsylvania and West Virginia until 11 PM EDT pic.twitter.com/IHskuFW7rz

The main threats from these storms are damaging straight-line winds in addition to the threat of dangerous lightning. There are also small threats of large 1-inch-diameter hail and tornadoes.

The Power of 5 team said to expect storms to start to fire west of Cleveland in the early afternoon and move quickly east, reaching Cleveland by about 5 p.m. and Akron before 6 p.m.

The storms will slide quickly southeast, and the threat ends between 7 p.m. and 8 p.m. The wild card is any potential lake breeze boundary developing ahead of the cold front. If a lake breeze develops Friday, storms may begin to pop along this boundary as well in a west to east line close to Lake Erie. These storms would have the best ability to "spin" and trigger Tornado Warnings.

The worst of the weather is expected to move out of Cleveland by 7 p.m., so the Indians game should face minimal impacts, but perhaps a slight delay. It will be the areas southeast of Cleveland, such as Canton, Carrolton and New Philadelphia that will see some storms impacting them by 7 p.m. to 8 p.m.

This has the potential to be a high impact event. Storms could arrive during afternoon rush hour and make for a difficult commute. Storms will arrive as folks are gathering for the Indians game and high school football. Thousands will be outside during this weather event. The weather team said to expect evening activities to be delayed and canceled due to storms and any damage or power outages they cause.

Stay tuned to News 5 beginning at 4 p.m. with The Now, and throughout the evening for updates from the Power of 5 Weather Team. Keep the News 5 App handy for alerts to major severe weather.