Winter isn't over yet, the beginning of March brings some snowfall

#Snow is on the way for tomorrow night and Friday morning. Could make for a messy morning. #Cleveland #Weather pic.twitter.com/1zIJ2USK7e

Rain and storms are possible Thursday afternoon into the evening with a high near 50 degrees. Then, the temperatures will continue to drop.

Cleveland averages a foot of snow a year in March. 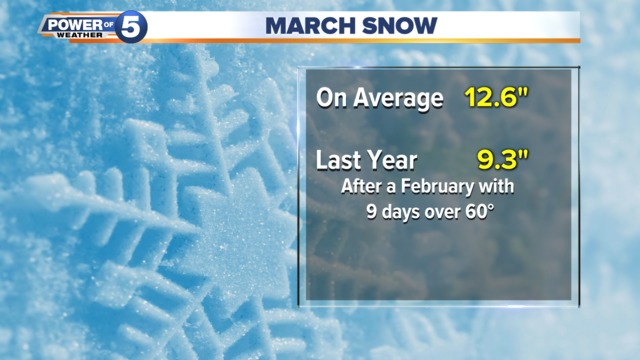 In February 2017, Northeast Ohio had nine days where temperatures were over 60 degrees, including one day where temps sky-rocketed to 77 degrees.

The warmer weather has caused portions of the lake to thaw, which could bring additional lake effect snow to the area.

Another reason why I think we'll get some "extra" snow in parts of the area Thursday night: Lake Erie. Ice cover has dropped off thanks to the direct sun and warm air.
So when the cold air comes rushing in Thursday night, the lake may enhance some snowfall. pic.twitter.com/x44OvzJysE

In 2018, February was good to us with six days having 60-degree weather.

The good news? Temperatures will be back in the 50s on Monday.