10 AM: Ohio Department of Health to give COVID-19 update
WeatherWeather News

Our first significant snowfall is possible for Greater Cleveland and the snow belt east of Cleveland beginning Monday night. Temperatures will dip down to the 30s and 40s later in the evening. A Winter Storm Watch is in place Monday evening through Wednesday evening.

Our first significant snowfall is possible for Greater Cleveland and the snow belt east of Cleveland.  Temperatures will dip down to the 30s and 40s later in the evening. A Winter Storm Watch is in place until Wednesday evening.

The snow this week is expected to affect travelers and school kids from Greater Cleveland east across Lake, Geauga and Ashtabula counties through Wednesday, primarily during the Tuesday and Wednesday morning rush hours. 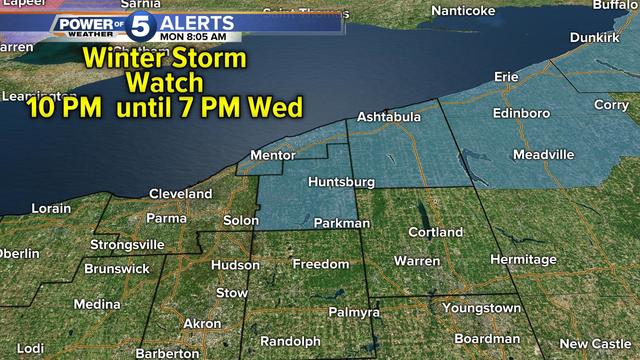 Local and state road crews are gearing up for what is expected to be a long, windy, and snow-filled 72 hours. An Ohio Department of Transportation official said snow plows will be running non-stop until the event has ended with drivers working 12-hour shifts. More.

A little lull in the action as scattered snow showers and blustery conditions will continue during the day. Snow totals will be less than an inch in most spots, with areas of the snowbelt seeing 1-3 additional inches. 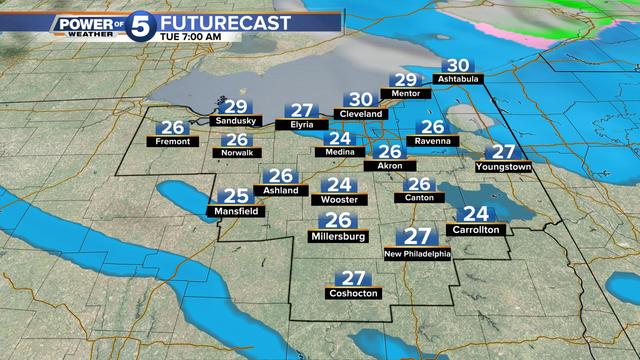 Those who live on the east side and in the snowbelt could face some issues while out on the roads. Expect heavy snow and poor visibility with gusty winds.

Lake effect snow showers continue for the snowbelt through Wednesday. 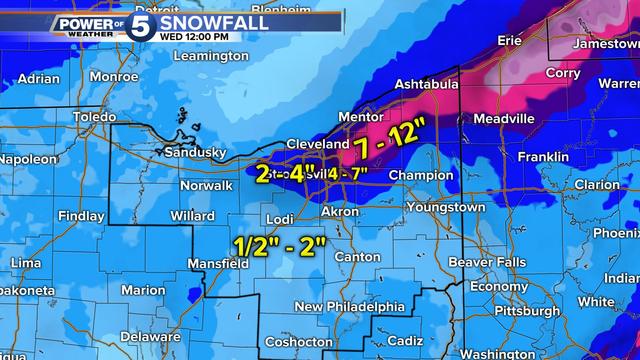 A trough of low pressure attached to the East Coast Winter Storm will slide westward back into Northeast Ohio. This, combined with northwest winds, should get the snow ramping up again. Heavy snow is possible east of Cleveland to Akron with an additional 3-7 inches of snow where the heaviest snow bands persist by the Wednesday morning rush.

A look ahead with Power of 5 Chief Meteorologist Mark Johnson

The National Weather Service has issued a Wind Advisory Monday for several counties in Northeast Ohio. The advisory is in effect from 4 p.m. Monday afternoon to 1 p.m. Tuesday. Wind speeds will be highest along the lakeshore. More.

Can be found on our Power of 5 Weather page.