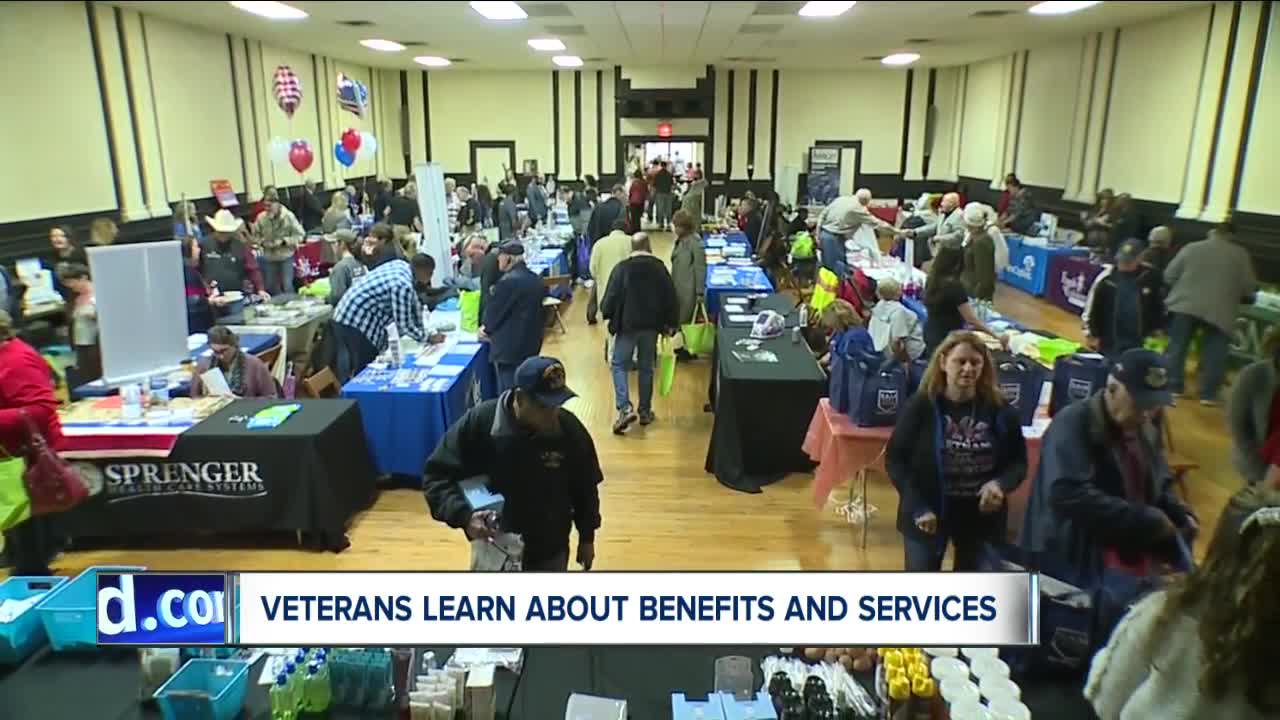 With Veterans Day this coming Monday, the VA and other organizations spent Thursday morning and afternoon trying to get Northeast Ohio veterans connected to the benefits and services for which they’re eligible. MASSILLON, Ohio — With Veterans Day this coming Monday, the VA and other organizations spent Thursday morning and afternoon trying to get Northeast Ohio veterans connected to the benefits and services for which they’re eligible.

The Veterans’ Resource Fair was held at the American Legion in Massillon, allowing veterans to enroll for VA healthcare, check on VA claims or appeals, look into compensation and pension benefits and a number of other services. There were also opportunities for veterans to get food, toiletries, flu shots and other items.

Jeffrey Archibald of Canal Fulton served in the U.S. Army from 1996 to 1999, and was stationed in Hawaii. He received a postcard in the mail about the Veterans’ Resource Fair and decided to attend to get a state veterans’ ID card.

“I thought that was only for people who were disabled or retired,” Archibald said.

Although Archibald had used a few veterans’ benefits in the past, including a VA home loan and the GI Bill with Kicker benefits, he said he didn’t know he was eligible for any other services until Thursday.

Archibald said he learned about several programs at the fair Thursday, including one where he could get naloxone in case he saw someone who overdosed. Although he isn’t actively working as a nurse, Archibald has an active nursing license and has seen that issue in the past, so he said he thought it would be helpful to carry naloxone around.

He also said he was able to set up an appointment to talk with someone about all potential benefits available to him or go over the possibility of filing claims for any disability.

“Just a bunch of stuff I didn’t even know was possible,” Archibald said.

He said he was glad he came out to the fair and encouraged others to do the same.

“I couldn’t even believe how helpful it was,” Archibald said. “So if anyone has the opportunity to come out, they definitely should.”

Kristen Parker is the chief of external affairs with VA Northeast Ohio Healthcare Systems, which covers 21 counties in Northeast Ohio. She said the VA works with community partners to host veterans’ resource fairs throughout the year. Typically, about five larger fairs like the one in Stark County are held in Northeast Ohio each year, in addition to about 170 smaller outreach events.

“Veterans connecting with their benefits is a huge challenge,” Parker said. “A lot of veterans may serve in the military and get out and not be focused on the VA right when they get out, and so it may be five, 10 years and they realize, ‘Oh, I should have filed for a disability claim. I need healthcare and I don’t know if I’m eligible.’ ‘My father passed away, he was a veteran, I don’t know what to do.’”

Connecting veterans with benefits, Parker said, is “a huge help” in solving some of the problems veterans face.

“Our veterans are kind of amazing in that they’re so independent and so strong,” Parker said. “I mean, they decided to give up their lives to serve all of us. I think sometimes veterans may not want to take advantage of the benefits cause they may think that it’s a handout. But it is 100% a benefit that they earned, whether it’s healthcare, whether it’s something with the Veterans Benefits Administration or even the National Cemetery Administration.”

By taking advantage of VA benefits, Parker said, veterans are helping other veterans.

“The way that our healthcare model is funded, the more veterans that are enrolled in our healthcare system, the more funds that we have that we can allocate for patients,” Parker said, noting that not all veterans have the same health needs. “If a veteran is perfectly healthy, just comes in for primary care, we can use those funds for somebody that has more serious illness.”

A local organization pitches in

Bryan Bowman is the president and founder of the SAM Center, which stands for Serving Area Military. The center’s only location is in Massillon, but Bowman said the center serves all Northeast Ohio veterans.

“If they can make it to our center or we can get things to them, we will bring it to them,” Bowman said.

Bowman, who served 21 years in the Army and Army National Guard, said he founded the organization to help veterans in need and let them know what benefits are available to them. He said it is also named after someone with whom he served in the military, who later died by suicide.

The center includes a commissary for veterans, set up like a food pantry with toiletries and other items. There, veterans can grocery shop for free.

Bowman said a Vietnam veteran who had a heart attack and was in financial distress came to use the food pantry last week.

The SAM Center helped the veteran enroll in healthcare and get started with filing a claim for service-connected compensation.

The center also offers lodging kits and warming bags to help homeless veterans, among other services.

A lawmaker weighs in on the importance of helping veterans

U.S Representative Anthony Gonzalez, who serves Ohio’s 16th District, attended Thursday’s fair and said that taking care of veterans is one of his office’s biggest priorities.

“As a member of Congress, you have a unique opportunity to provide services that have nothing to do with legislation,” Gonzalez said.

Because of that, Gonzalez said his office does a lot of veterans’ resource tours, setting up shop in different parts of the district for veterans to access services in the community.

He said the issues veterans face run the gamut.

“Some have minor issues, as much as just getting a bill paid by the VA, but then it goes all the way down to some really serious things around mental illness and homelessness,” Gonzalez said. “With that sort of gamut of issues, we try to provide service in every way possible.”

For veterans who want to know more about their eligibility for benefits, Kristen Parker encouraged them to stop in at VA location, one of 18 in Northeast Ohio, with their discharge paperwork.

Veterans can also go online to explore information there, or call the main VA medical center at (216) 791-3800 and ask the operator to speak with outreach.