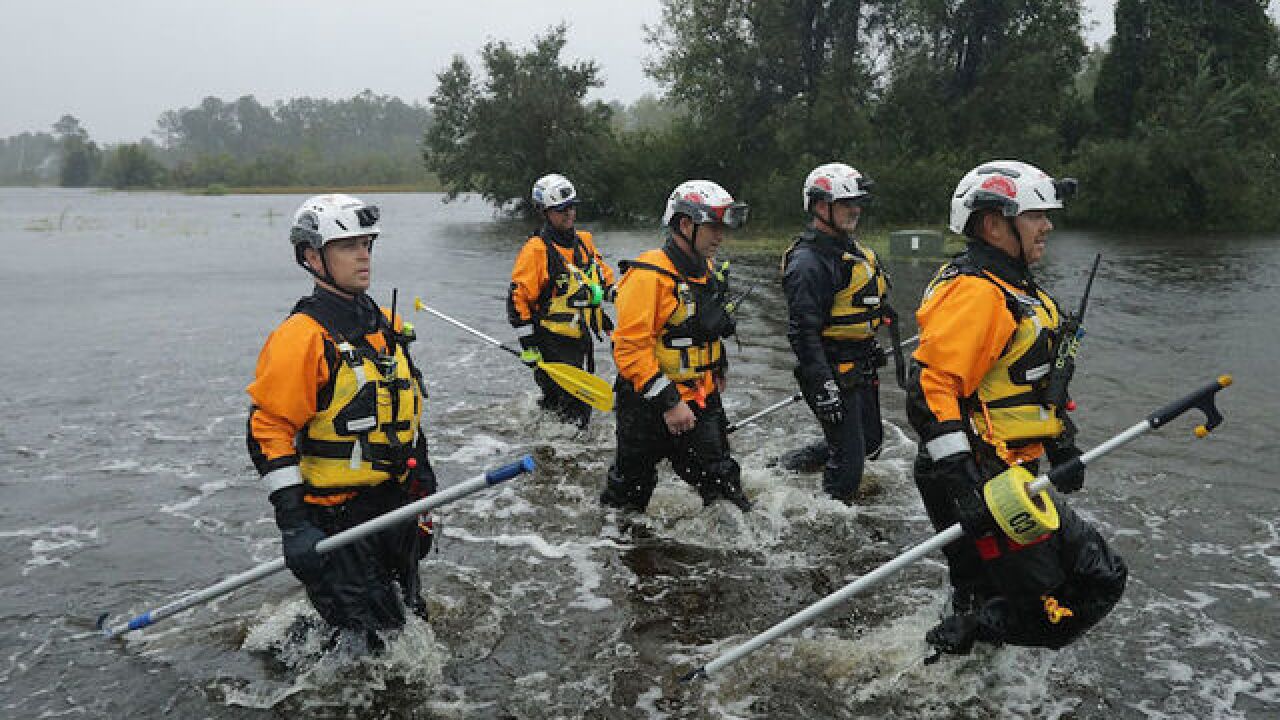 Image copyright 2018 Getty Images. All rights reserved. This material may not be published, broadcast, rewritten, or redistributed.
Chip Somodevilla
<p>Members of the FEMA Urban Search and Rescue Task Force 4 from Oakland, California, search a flooded neighborhood for evacuees during Hurricane Florence September 14, 2018 in Fairfield Harbour, North Carolina. Hurricane Florence made landfall in North Carolina as a Category 1 storm and flooding from the heavy rain is forcing hundreds of people to call for emergency rescues in the communities around New Bern, North Carolina, which sits at the confluence of the Neuse and Trent rivers. </p>

Two people have died in Wilmington, North Carolina, after a tree fell on their house, one person has died in Pender County, and another person died in Lenoir County from a faulty generator, the first reported storm-related deaths due to Hurricane Florence.

A second death was also reported in Lenoir County.

"WPD can confirm the first two fatalities of Hurricane #Florence in Wilmington. A mother and infant were killed when a tree fell on their house," the city's police department tweeted Friday afternoon. "The father was transported to (New Hanover Regional Medical Center) with injuries."

In the town of Hampstead, emergency responders going to a call for cardiac arrest Friday morning found their path blocked by downed trees. When they got to the home, the woman was deceased, Chad McEwen, assistant county manager for Pender County, said.

After holding onto hurricane strength for hours after it came ashore early Friday morning, Florence was downgraded to tropical storm status as of 5 p.m. Friday. Despite the lower status, it is still packing a punch.

Florence is inching along after making landfall hours earlier in North Carolina, trapping people in flooded homes and promising days of destruction and human suffering.

Storm surges, punishing winds and rain are turning some towns into rushing rivers -- and the tropical storm is expected to crawl over parts of the Carolinas into the weekend, pounding some of the same areas over and over.

"The storm is going to continue its violent grind across our state for days," North Carolina Gov. Roy Cooper warned residents at a news conference.

In the besieged city of New Bern, North Carolina, rescuers had plucked more than 200 people from rising waters by midmorning, but about 150 more had to wait as conditions worsened and a storm surge reached 10 feet, officials said.

“Our hearts go out to the families of those who died in this storm,” Governor Cooper said. “Hurricane Florence is going to continue its violent grind across our state for days. Be extremely careful and stay alert.”

Florence's rain will bring 40 inches to some parts of the Carolinas, forecasters said. Rainfall totals will be similar to those in hurricanes Dennis and Floyd in 1999, the National Weather Service's Chris Wamsley said

"The only difference is, back then it was within 14 days," he said. With Florence, "we're looking at the same amount of rainfall in three days."

By Friday morning, Florence already had:

• Forced 26,000 people into more than 200 emergency shelters across the Carolinas.

• Pushed more than 60 people to evacuate from a hotel in Jacksonville, North Carolina, after part of the roof collapsed, city officials said.

• Canceled more than 1,100 flights along the East Coast on Friday and Saturday.

• Florence's location: By 6 p.m., Florence's center was about 25 miles northeast of Myrtle Beach, South Carolina, and was crawling at 5 mph, with maximum sustained winds of 70 mph.

• Prolonged, dangerous winds: The storm is expected to lumber into far southeastern North Carolina and eastern South Carolina through Saturday, punishing the area with rain and damaging winds.

• Flooding for miles: Up to 40 inches of rain, and storm surges pushing water inland and not allowing rivers to drain, "will produce catastrophic flash flooding and prolonged significant river flooding," the National Hurricane Center says . "You're going to have flooding miles and miles inland," the center's director, Ken Graham, said.

• Areas threatened: A hurricane warning is in place for South Santee River in South Carolina to Bogue Inlet and Pamlico Sound, North Carolina. Surges of 10 feet were reported early Friday in Morehead City and elsewhere in North Carolina, the National Weather Service said.

• Nuclear plant shutdown: A nuclear power plant in Brunswick, North Carolina, shut down operations because of the storm, the US Nuclear Regulatory Commission said on Twitter . "Plant procedures call for the reactors to be shut down before the anticipated onset of hurricane-force winds," agency spokesman Joey Ledford told CNN. Federal officials had said midweek they weren't concerned about that facility or five other nuclear plants in the storm's path, calling them "hardened." Expert scientists, however, had said they were worried about Brunswick because of scant public information about its readiness.

More than 1 million people had been ordered to evacuate before the streets became inundated.

Florence's circulation was pushing water ashore, especially north of its eye, in coastal or riverside towns such as New Bern and Belhaven, turning land to lakes.

In New Bern, where dozens awaited rescue Friday morning, Peggy Perry said rising water forced her into the upper level of her home.

"In a matter of seconds, my house was flooded up to the waist, and now it is to the chest," said Perry, who was trapped early Friday with three relatives. "We are stuck in the attic."

Craven County, where New Bern is located, had logged more than 100 service calls from residents trapped on their roofs or in their cars, county spokeswoman Amber Parker said.

In Belhaven, the Pungo River roared into town, crashing up against homes at a waist-high level and higher late Thursday and early Friday, video from Amy Johnson showed.

Morehead City resident Rebecca Marson said she decided not to evacuate because her surgeon husband wanted to remain behind with other first responders. They're riding out the storm at their home with four children -- ages 11 to 17 -- a friend, four dogs, two chinchillas, a cat and a lizard.

Marson said they'd lost power and they have enough food and water to last for days.

Employees at New Bern's WCTI-TV station fled their studio Thursday night due to rising floodwaters. A posting on social media showed a meteorologist saying on air they had to evacuate. In the footage, he leaves the studio, with radar of Florence's rain bands playing on a loop.

Just west of downtown Wilmington, firefighters spent hours Friday morning and afternoon trying to rescue two adults and a child from a house after about a 30,000-pound tree fell on it, fire officials said.

Crews lifted the tree enough to get one injured man out, and were working to lift it completely to reach the two others, who weren't communicating with rescuers, Wilmington fire official Patrick Campbell said.

Wilmington Fire Chief Buddy Martinette praised his firefighters, who by policy are supposed to stop operating when winds pick up above 50 mph.

"We haven't been ... able to get in that policy. ... ," Marinette said. "The firefighters have basically been out here all during the hurricane," answering rescue and fire calls.

In Morehead City, Brooke Kittrell rode out the storm Thursday and Friday with her boyfriend aboard their docked boat, hoping it didn't break loose and slam something.

She succeeded -- staying awake all night, retying broken dock lines in howling winds. But there were times she thought they wouldn't survive, she told CNN.

"I honestly cried," Kittrell said. "I was born and raised here and been through every storm the last 30 years, but this one seems to be doing more damage than we expected."

By Friday morning, the shore was flooded, and buildings were damaged, in video she put up on Facebook.

Officials in several states have declared states of emergency, including in the Carolinas, Georgia, Virginia and Maryland, where coastal areas are still recovering from summer storms.

Florence is one of four named storms in the Atlantic.