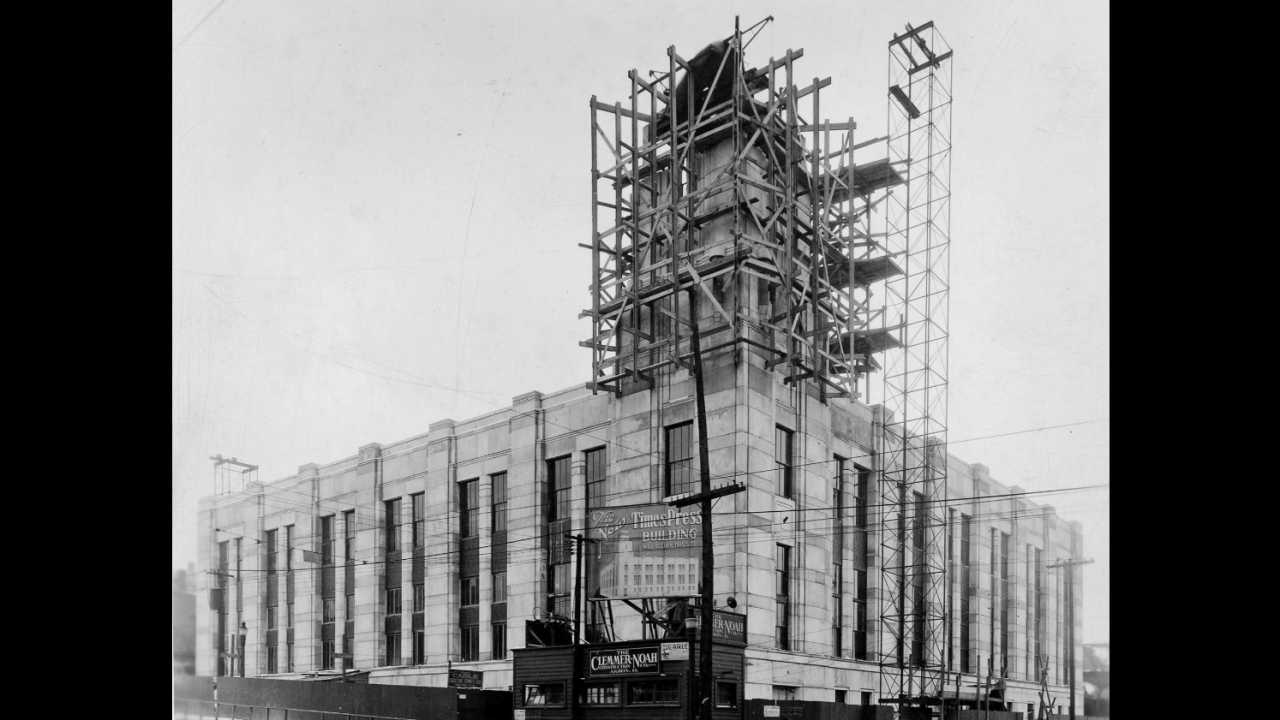 The Akron Times-Press building, 1930, then owned by Scripps before it was purchased in 1938 by the Akron Beacon-Journal.

Editor's note: Our media partners at the Akron Beacon Journal are saying goodbye to their headquarters at the corner of High and Exchange streets this weekend. The building was originally owned by News 5's parent company, Scripps, publisher of the Akron Times-Press, before it was sold to the Beacon Journal in 1938. With their permission, we're republishing Mark Price's article about this historic building as we wish our friends in Akron godspeed on their move and many fond memories to come in their new digs on Main Street.

The front step has a dip in the middle.

Like a mighty river polishing a granite rock, nearly 90 years of footsteps have eroded the stone entrance. Wingtips, high heels, oxfords, loafers, boots, wedges, sneakers, galoshes, clogs, sandals and even some flip-flops have entered the building at 44 E. Exchange St.

Now the footsteps are exiting.

This weekend, the Beacon Journal is leaving its longtime home at High and Exchange streets and moving about two blocks southwest to the top floor of the AES Building in the former B.F. Goodrich complex at 388 S. Main St. in downtown Akron.

But not without a look back.

The Akron Times-Press was the original owner of the newspaper complex, and if you look carefully at the building from East Exchange Street, you can still glimpse the faint outline of its name on the wall. The Clemmer-Noah Co. of Akron broke ground on the gray limestone structure in 1929 based on designs from Cleveland architects Howell & Thomas.

The building arose on the former site of another landmark, German-American Music Hall, a cultural center perhaps best known for giving future Hollywood star Clark Gable, then an Akron rubber worker, his first speaking role in a play.

A key feature of the three-story Times-Press building was an 87-foot tower built to resemble a lighthouse, the corporate symbol of the Scripps-Howard Co., the newspaper’s owner. The ornate tower was bathed in floodlights at night and housed a steel tank containing the building’s reserve water supply.

A bronze bust of newspaper chain founder Edward Wyllis Scripps greeted visitors from a niche in the front lobby when the building was dedicated June 23, 1930. An overflow crowd of newspaper executives, rubber manufacturers, community leaders and other dignitaries attended the gathering.

“We pause to acknowledge our indebtedness to the past and to render gratitude for those influences and institutions that have lifted the world out of barbarism into the light of present day civilization,” the Rev. W.W. Dieterich prayed during the benediction. “Especially are we grateful today for the printing press and the contribution it has made to human progress and social welfare. For that democracy of information that prevails in this, our day and generation, we are devoutly grateful.”

In the dedicatory address, attorney Robert Guinther, president of the Akron Chamber of Commerce, told the crowd:

“This group is gathered for a purpose quite apart from the usual course of business and activity in Akron. A new home is to be occupied by a newspaper; new presses are to turn, and the threads of the world’s affairs are here to be woven through the minds and efforts of those who will live and have their work within this building.”

Its main rival, the Akron Beacon Journal, led by President and Editor John S. Knight (1894-1981), purchased the Times-Press on Aug. 28, 1938, and moved into the building from its headquarters at 140 E. Market St., now the home of Summit Artspace.

Knight had bought the Miami Herald in 1937, the beginning of a newspaper chain that eventually grew to 32 newspapers and employed 18,000 workers.

“We fully recognized ... that the control and guidance of the sole remaining daily newspapers in the city of Akron places upon us a very serious and definite responsibility to the community in which we live,” the Beacon Journal noted in a front-page announcement of the merger.

“Very humbly, therefore, we undertake this responsibility with the fervent hope that we may always serve the greater Akron district faithfully and well. Unquestionably we will make mistakes but they will be honest ones and we trust not too frequent.”

In November 1939, Knight had the Bellows Electric Co. install giant oval-shaped clocks atop the front tower. For the next 80 years, motorists and pedestrians looked up to the tower for the correct time.

A four-sided clock was installed in 1955 followed by a revolving aluminum sign with the red initials “BJ” in 1966. Finally in 2005, the Beacon Journal restored the tower to its original art-deco look with a $500,000 project that added LED screens to display the time, temperature, headlines and advertising.

With a dedicated staff of editors and journalists, the Beacon Journal developed a reputation as one of the best newspapers in the Midwest, routinely scooping larger newspapers on big stories and becoming a trusted source for news and information.

From its base at 44 E. Exchange St., the Beacon Journal captured four Pulitzers in the past 50 years:

Knight’s personal chauffeur transported Harry Truman, Dwight Eisenhower, Lyndon Johnson and Richard Nixon in Akron. President Johnson caused a bit of pandemonium in 1964 when he walked into the office unannounced to visit Knight.

Contributions to the community have been countless:

The building has undergone at least three major additions and witnessed huge changes, including switching from linotypes and hot-metal composition to cold type in 1975, going from afternoon to morning publication in 1987 and ushering in the digital age with the Beacon Journal’s first website in 1995.

Founded in 1839, the Beacon Journal remains the oldest continuously operating business in Summit County. And now we’re moving on up.

GateHouse Media purchased the Beacon Journal from Canadian company Black Press Ltd. in May 2018. Black Press, which still owns the building, has not revealed what it plans to do with the block once the newspaper moves, but it landed on Preservation Ohio’s List of Ohio’s Most Endangered Historic Sites of 2019.

The building at 44 E. Exchange St. has served the Beacon Journal well for decades, but it’s too big for the current staff. So we’re packing up our belongings, including our Pulitzers and John S. Knight’s portrait and typewriter, and taking our talents to South Main.

We’re getting a fresh start in a newly renovated space atop the AES Building.

A few words of wisdom from John S. Knight before we move:

“Don’t be afraid of change.”

See you on Main Street.