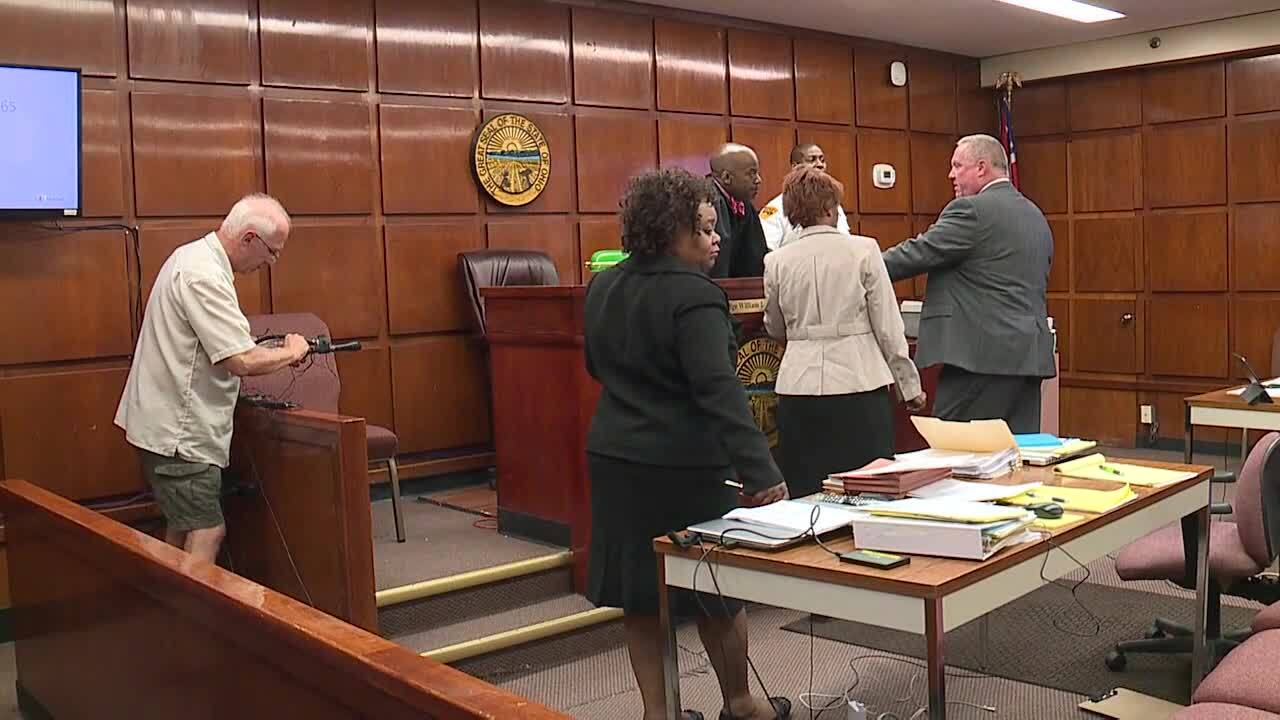 Counselors confer with the judge during one of several recesses during the second day of the trial of Cleveland police Sgt. Patricia Coleman.

EAST CLEVELAND, Ohio — Confusion and procedural hold-ups marred the second day of the trial of a Cleveland police sergeant charged with dereliction of duty during a deadly 2012 chase that ended with 137 shots being fired by police.

Sgt. Patricia Coleman is one of two police supervisors charged with failing to control the officers under her supervision on the night of Nov. 29, 2012. Coleman, the supervisor for the Second District Vice Unit during the night in question, is accused of essentially allowing her units to be a part of the pursuit when they should not have been authorized.

The first witness to be called Tuesday was Officer Vasal Man, but in the middle of his testimony, the prosecutor asked the jury to be excused so she could show him his original testimony to refresh his memory, as he was not saying who was on the radio transition from the night in question.

After the trial broke for lunch, the judge and counselors resumed the day’s proceedings without the video of Man’s interview.

Officer Alan Almeida was then called to the stand. He was a mobile support officer who was present with Man when they first saw the car and heard the alleged first gunshot.

There was confusion in the courtroom as to why Almeida was testifying, as he was not part of the Vice unit and was unable to answer questions related Coleman’s involvement.

The third witness to be called Tuesday was Detective William Miranda of the Second District Vice Unit. His supervisor at the time of the incident was Coleman. He testified that he was driving the police cruiser with Coleman in the passenger seat. They were the lead unit at one point during the chase, because the leading car fell behind.

BCI agent John Saraya then testified Tuesday. He said BCI does not bring or recommend criminal charges, and they did not find any wrongdoing by Coleman, or it would have been in the report on the incident. He added that the Ohio State Highway Patrol, Cuyahoga County Sheriff’s Office, Bratenahl police and RTA also had cars involved in the pursuit, but none of those agencies have been charged.

Timothy Russell and Malissa Williams were shot and killed when 13 Cleveland police officers fired 137 bullets into the car the pair were riding in after a 22-mile chase that began near the Justice Center downtown ended at East Cleveland's Heritage Middle School. Russell and Williams were unarmed.

Coleman did not fire a shot that night, but during opening statements on Monday, East Cleveland Law Director Willa Hemmons told jurors that Coleman disregarded and disrespected police policy and orders.

Earlier this year, the City of East Cleveland dismissed charges against three other Cleveland police supervisors involved in the 2012 high-speed chase. Judge William Dawson dismissed the case with prejudice against Jason Edens, Michael Donegan and Paul Wilson, meaning they can’t be retried. Each supervisor had been charged with dereliction of duty.