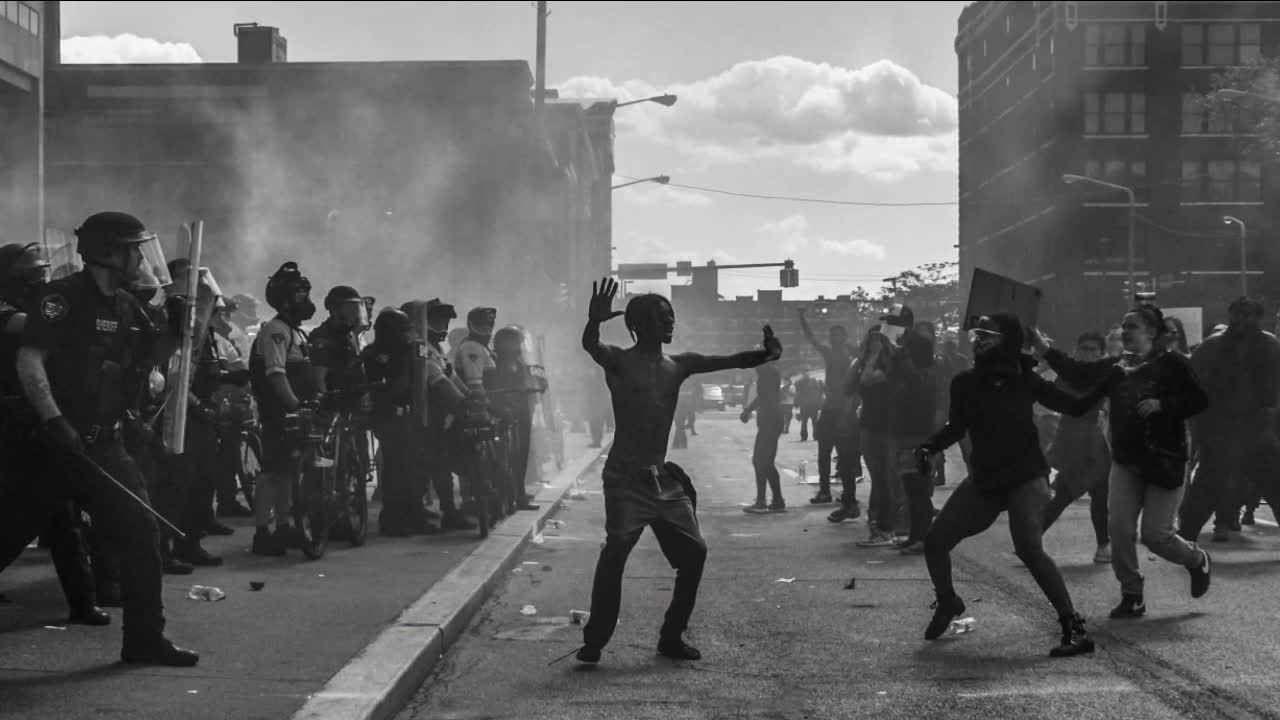 A 2020 graduate of Cleveland Institute of Art captured a photo that summed up a day of demonstrators protesting police violence in Cleveland. 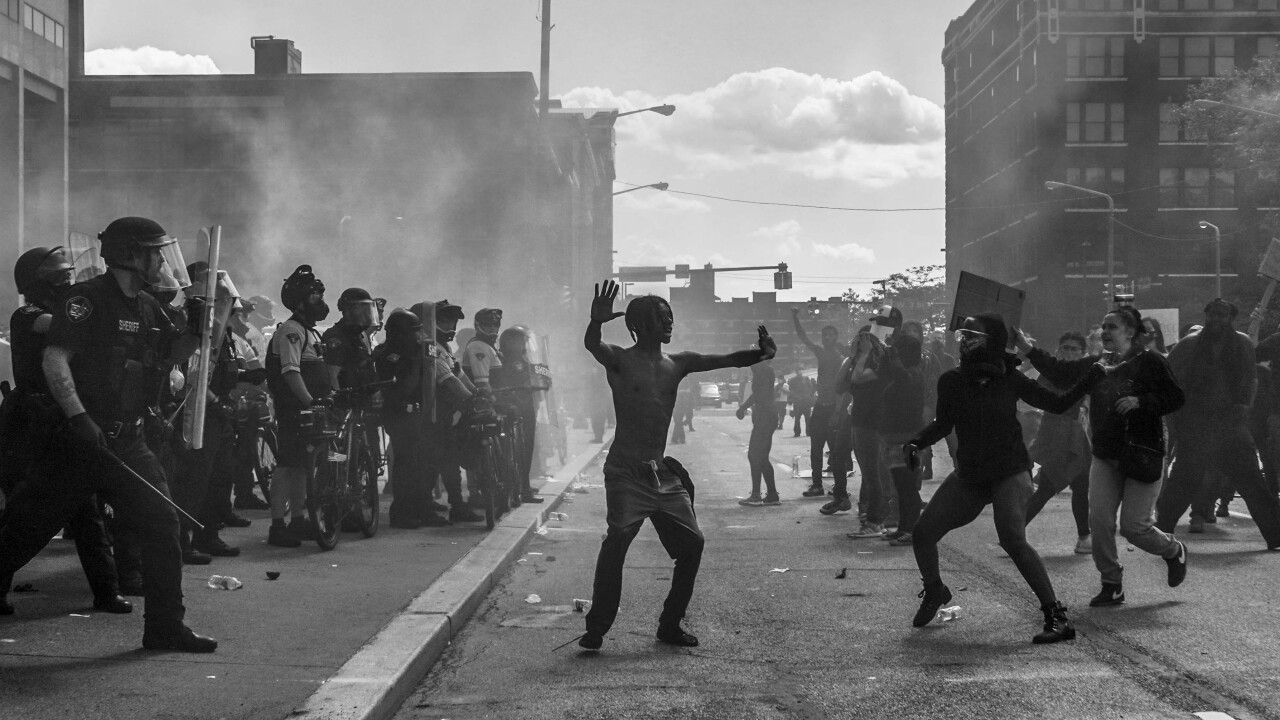 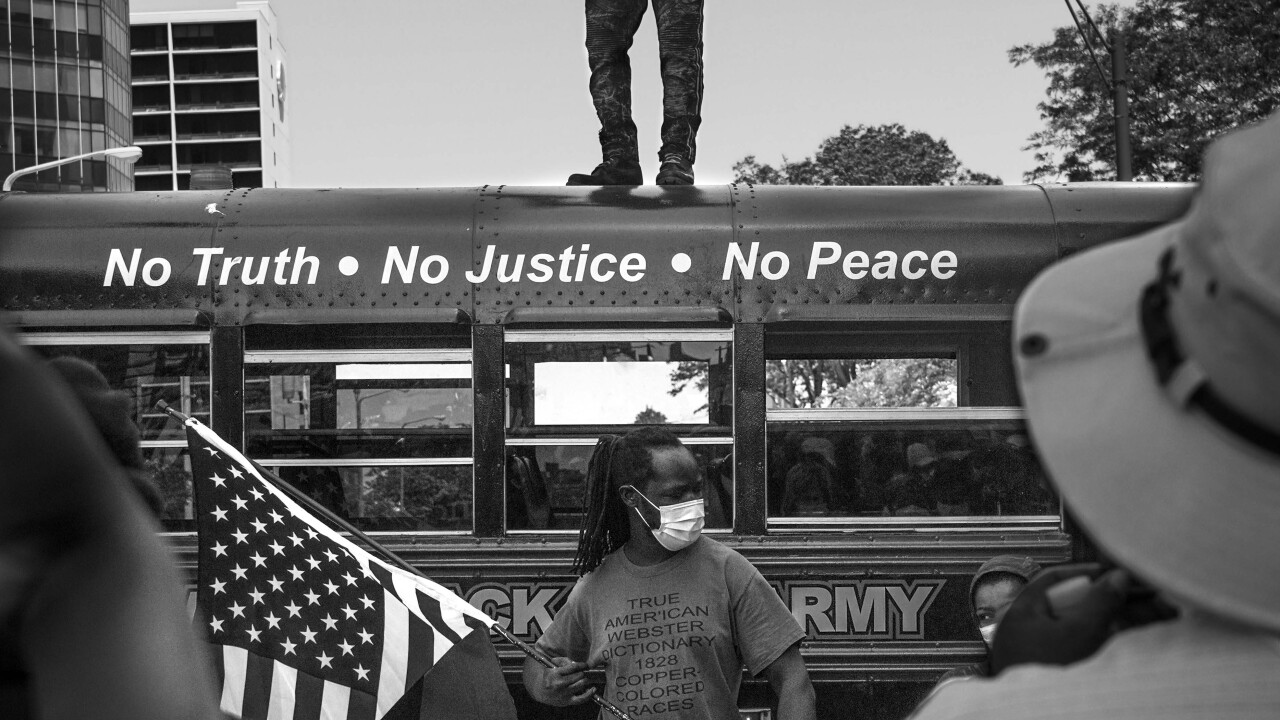 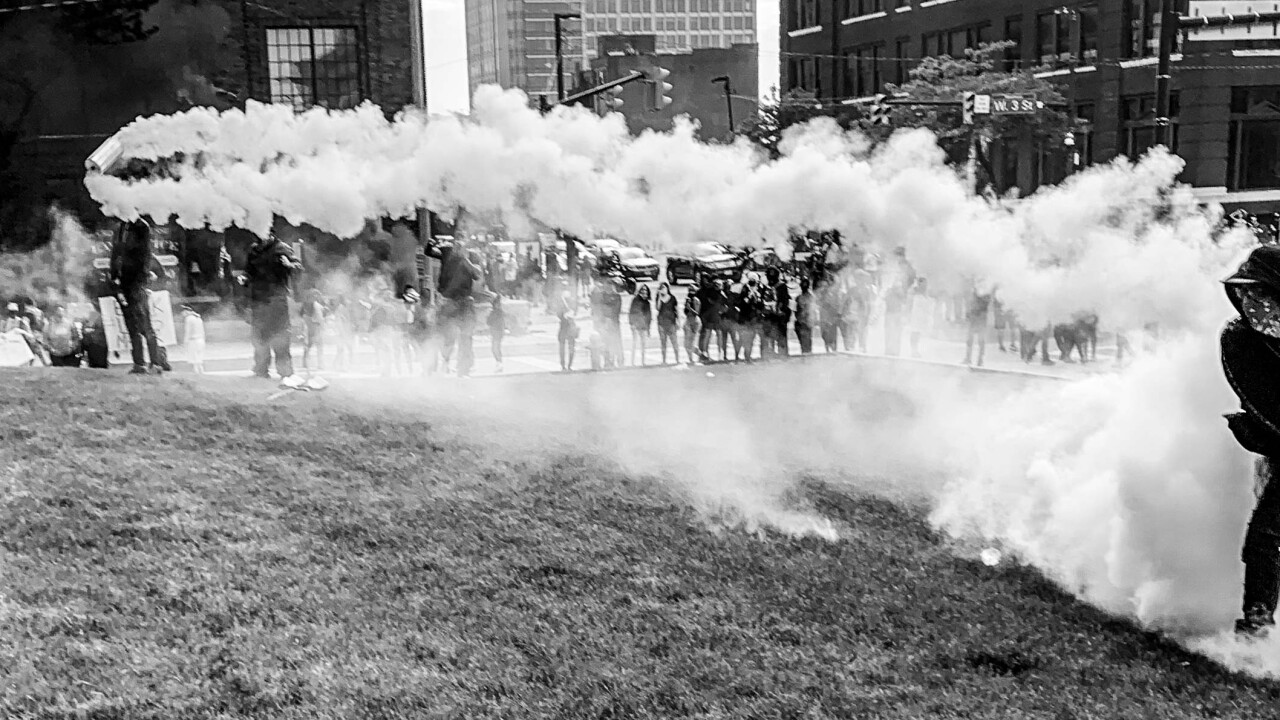 CLEVELAND — When AJ Almy showed up at Cleveland’s Free Stamp at Willard Park on May 30 with his camera and his bike and saw a large group of citizens packed shoulder-to-shoulder—their voices demanding to be heard and handmade signs with messages begging for change—he knew he was documenting history in the making. Under the warm sun, he photographed hundreds of people kneeling, giving speeches and peacefully protesting against police violence and racial injustices.

Hours later, he was still there, documenting the scene, as agitators broke away from the peaceful movement and clashed with police, and in those tense moments he captured an image that summed up what so many protesters sought that day: a desire for peace.

Calling the photo “Bridging the Divide,” it captures a lone activist named Vincent Hardaeous with his arms spread out, standing between police with batons and shields and protesters yelling, while he pleads for both sides to stop.

“And because of this one gentleman, he de-escalated it very quickly, because he got right in the middle of the chaos and put his life on the line,” Almy said.

That gentleman, Hardaeous, said he stepped in as tensions mounted at the Justice Center because he was worried about everyone's safety.

"I tried to get everyone to form a line, which we were successful at until things progressed as they did. As the protesters started moving down the stairs, one of my main thoughts was we're going to keep getting pushed back and as that happens, more people are going to get hurt," he said.

Eventually, tear gas and smoke filled the air, and the actions of a violent few overshadowed the peaceful many.

RELATED: The moment when a group of agitators changed the tenor of what has been a peaceful assembly

Hardaeous said it's sad that it took the death of George Floyd at the hands of a police officer being recorded on video for people to wake up.

"It's [racial injustice] like this has been happening for 500 years now. There needs to be a change. The fact that skin color is even a problem in 2020 is actually laughable. It's very laughable. For people not to be able to see that what they're doing is wrong, it is very sad," he said.

From Bogota to Mantua
Almy's long journey to Cleveland that day began more than 2,500 miles away in an impoverished barrio called Aguas Claras, on the outskirts of Bogota, Colombia. At 4 years old, he was placed into an orphanage by his parents because his surroundings of makeshift, cement homes were no place to raise a child, he said. His life changed at 7 years old when a couple from Mantua, Ohio adopted him and brought him back to the U.S.

“I'm all with them [Black Lives Matter] because I've had the struggle of searching for my own identity and with racism. I can feel, not as drastically as they do, but as a light-skinned Colombian-American visiting my home country not being accepted at first by my own people,” he said.

When he was adopted, he left a sister behind, who he describes as someone who “pretty much raised him.” He didn’t know if he would ever see her again, and he didn’t, until nine years later when he made an effort to locate her through a man who connects lost siblings. From there, he messaged her on Facebook, and in the summer of 2019, he made the trip down to Colombia, where he met family he never knew he had, including his mother, who was still alive.

“It was such an incredible feeling. I mean, we were at the airport and there are just hundreds of people. And then we both saw each other through this huge crowd. And it was like, I swear, it's like a movie, like running past people between people. And then we just meet in the middle and just embraced cry,” he said.

It’s the separation from a part of one’s identity that took Almy back to Colombia and forged the decision to pursue art as a career. As a 2020 graduate of the Cleveland Institute of Art, there’s no better time, Almy said, to use his bachelor’s degree in photography to document history and the fight against racial injustices.

“I want to show the world the events that are going in the fight for equality in the country. Because of these pictures, people are struck by emotion. If they don't agree, or if they do you agree, it doesn't matter to me. And I just want them to react to the image and to think about the movement,” Almy said.

How Almy used his camera, Hardaeous hopes people use their anger, frustration and empathy to create real change and to make sure history doesn't repeat itself.

"There should always be some kind of change or some kind of progress. If there is going to be a problem, we shouldn't be stuck on the same one for centuries," Hardaeous said. "People need to vote. That's a real thing. And not just for our president, but just people who are in our cities alone."

As someone who is documenting the protesters who have been largely peaceful throughout Northeast Ohio, Almy hopes everyone will continue to see the humanity inside each protester.

“I'm hoping that these images will show the world that there is a problem with racism and that we need to really—I don't think fix is the right word—but to work on accepting everybody and not treating them wrongful. And basically, just having the golden rule: Treat me as you would want to be treated," he said.

Hardeaous, who sees the positive in every situation, believes real change is coming, and it's his generation leading the charge.

"I'm guaranteeing that there is going to be change," he said. "I have a lot of faith and a lot of hope and not just in this generation, but everyone on the planet. I think if we want this movement to continue, we should be educating everyone around us. Age does not matter if there's blind ignorance, it could be from age of birth to the day you die. And it's our job to educate those people."