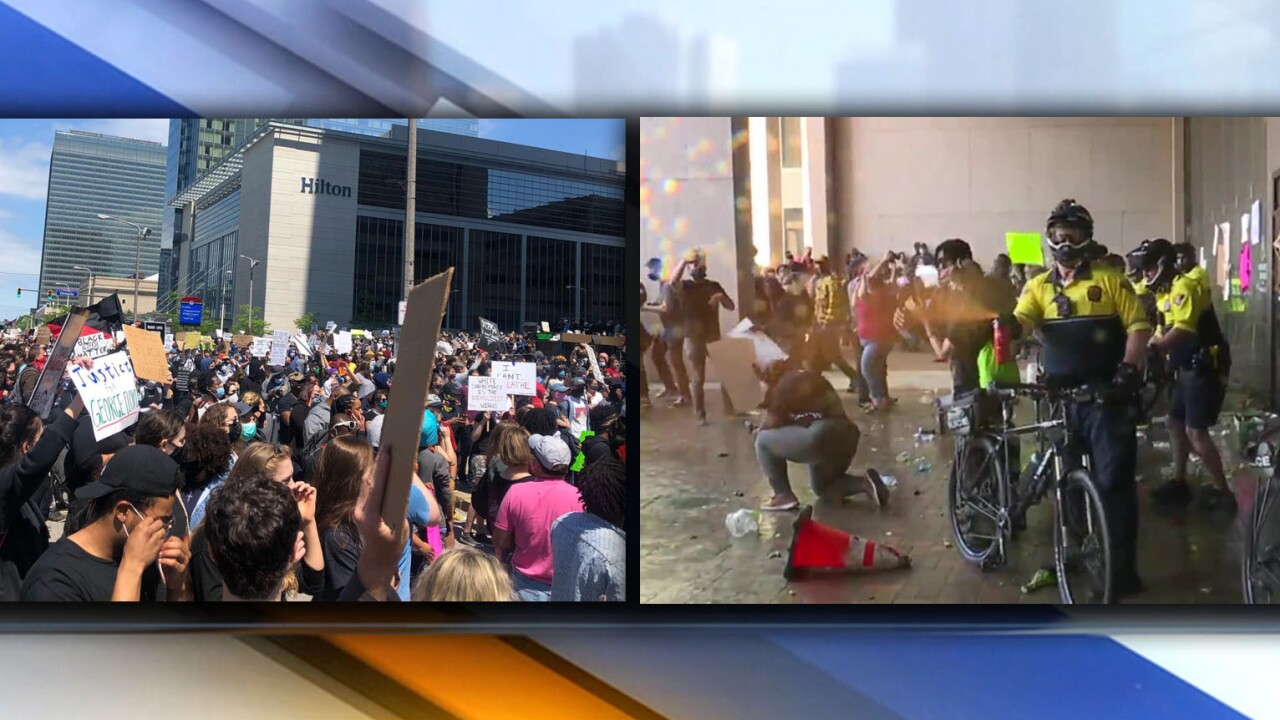 CLEVELAND — If you turn on the television or open a livestream, you'll likely see the violence and destruction that has ravaged the city of Cleveland. A protest intended to call attention to police violence and shed light on racial injustices turned into a riot in a matter of hours.

But how did it get to that point?

The start
Riots don’t just appear out of thin air. They develop, typically from protests that begin peacefully. And protests that spiral out of control tend to continue on peacefully in separate areas.

Cleveland is a prime example.

During a protest against police violence and racial injustices following the death of George Floyd, Clevelanders gathered together, joined by others of multiple races with signs demanding justice.

And chants expressing the desire for change.

The protest began on Lakeside Avenue and some marched west, stopping outside of the county jail and moving onto the stairs of the Justice Center. That’s when that part of the protest took a turn.

The turn
On the stairs of the Justice Center, more chanting began, but a few individuals shifted the energy, beginning with chants of profanity and then throwing food and trash at the building.

While a few individuals were attempting to turn the protest into a more violent one, peaceful protesters pleaded for them to calm down, pulling away some who were attempting to pull open the doors of the Justice Center and asking them to stop their aggression.

Peaceful protesters attempted to push the group of demonstrators who marched to the Justice Center back onto the street, seemingly aware of the threat of escalation the few violent individuals could cause.

“Don’t give them what they want!” one woman shouted.

More protesters attempt to halt the violent individuals in Cleveland

Police arrived and created a blockade in front of the Justice Center. From there, individuals set on violence could be seen throwing items at the line of officers, and one person could be seen kicking an officer’s bicycle.

Those few violent acts were the catalyst to police reaction, an attempt to control the crowd with a chemical deterrent. With people tear-gassed or pepper-sprayed, that area of the protest erupted.

Peaceful protesters can be seen trying to stop individuals who were inciting violence the moment before officers began deploying pepper spray and the demonstration began to spiral out of control. pic.twitter.com/e3P6ZbDjE4

Windows were smashed, property was spray-painted, police cruisers were attacked and caught fire.

Yet as the violence and destruction became the focus for many of us, there were still many areas where peaceful protesters continued to push their message of justice.

The takeaway
While a group of violent individuals began running rampant in the street, others who wanted to spark change using peaceful demonstration continued to do just that.

Protesters stood on the sidewalks with their signs, still attempting to send a message nonviolently. Some chanted, some danced.

Check in at the protest in Cleveland.

3 cars on fire. Lot of standing around. pic.twitter.com/alc8VkJSLO

With the police now working to control the crowd, groups of peaceful protesters were inevitably caught in the violence, having chemical deterrent thrown into their ranks as well, and dispersing many of those who were still valiantly attempting to keep the protest on track.

A peaceful protest looking for positive change was turned upside down and into a violent mess in a few moments by a few individuals.

Not by the crowd en masse, but by a destructive element within it.

But those agitators have made it easy to forget that the point of Saturday’s event -- and why most people who were present showed up -- was a peaceful demonstration with hopes of balancing the racial injustices of the community—and the nation.