The latest updates on George Floyd and racial injustice protests 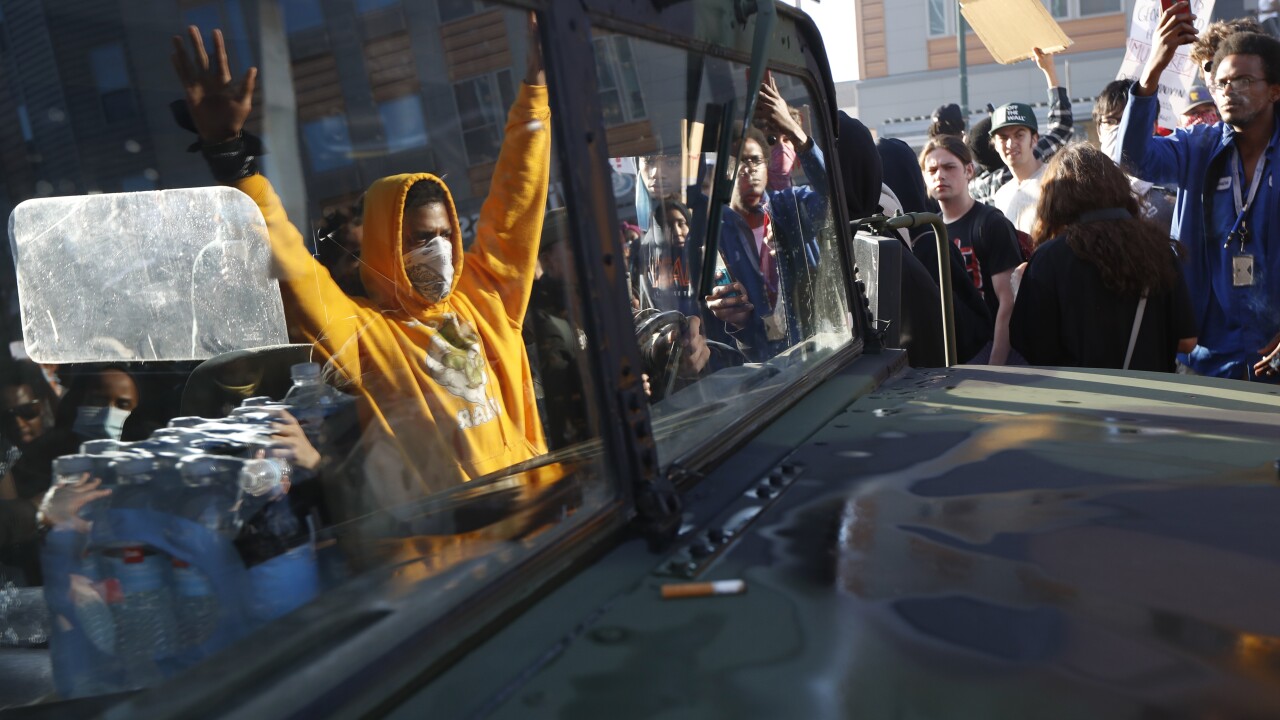 Protesters stand near a Minnesota National Guard vehicle Friday, May 29, 2020, in Minneapolis. Protests continued following the death of George Floyd, who died after being restrained by Minneapolis police officers on Memorial Day. (AP Photo/John Minchillo)

CLEVELAND — As days go by, more and more protests are taking place following the death of George Floyd in Minnesota earlier this week. To help you keep up with news regarding Floyd's death, racial injustice and the protests happening around the country, we'll post this daily blog on our homepage.

8:20 PM
Due to protests turning violent and destructive, a Proclamation of Civil Emergency has been enacted in the city of Cleveland due to civil unrest, with a curfew set in the Downtown and central business area, according to Cleveland police. Gov. Mike DeWine has also activated the Ohio National Guard to assist in responding to the incidents of violence. More here.

8:00 PM
Downtown Cleveland storefronts were vandalized Saturday evening after what started off as a peaceful protest for George Floyd, the unarmed black man who died in police custody in Minneapolis, turned destructive as some individuals smashed windows. More here.

Protestors are throwing objects at our mounted unit/police horses.

6:11 PM
As protests over the death of George Floyd continue in Cleveland, EMS has been transporting people that received injuries during the demonstration. More here.

6:04 PM
During a speech in Cape Canaveral, Florida, President Donald Trump addressed the ongoing anti-police brutality protests throughout the country, saying that he would not allow "radical left criminals, thugs and others" to "set communities ablaze." More here.

As protests continue, citizens are advised to avoid the downtown area.

4:24 PM
What started off as a peaceful protest turned into destruction as individuals could be seen destroying police cars, smashing them and spray painting the word "pig" on them. One of the cruisers caught on fire.

Members of the Cleveland Police Department deployed a chemical deterrent Saturday afternoon after protesters marched from the Free Stamp at Willard Park to the doors of the Justice Center. Authorities apparently deployed pepper spray after they were pelted with objects from the crowd. The Cuyahoga County Sheriff's office responded by sending deputies wearing full riot gear to guard the door. More here.

12:05 p.m.
For many in the black community, watching the killings of black men and women on the news or social media is traumatizing and can take a huge toll on their mental health. That trauma can be channeled in different ways, like anger, sadness, or confusion. Experts say all of those feelings are valid and can be used as tools to bring about change. More here.

10:27 a.m.
Hundreds of Cleveland residents and visitors are planning to gather at the iconic Free Stamp for a demonstration to protest the death of George Floyd and racial injustice. The event is scheduled to start at 2 p.m. and run until 5 p.m. The Free Stamp in Willard Park is located at East 9th Street and Lakeside Avenue. More here.

9:41 a.m.
A demonstration is scheduled to happen Saturday in Akron as residents gather to protest the death of George Floyd and police brutality. The event is scheduled to start around noon. More here.

9:15 a.m.
Residents who took to the streets Friday evening in Canton to protest the death of George Floyd and police brutality were met by police wearing riot gear. More here.

10:58 p.m.
A reporter and photojournalist for Louisville-based station WAVE-TV appeared to be intentionally targeted by police with rubber bullets during the protest. It is unclear based on several viral videos of the incident why police fired on the reporters there. More here.