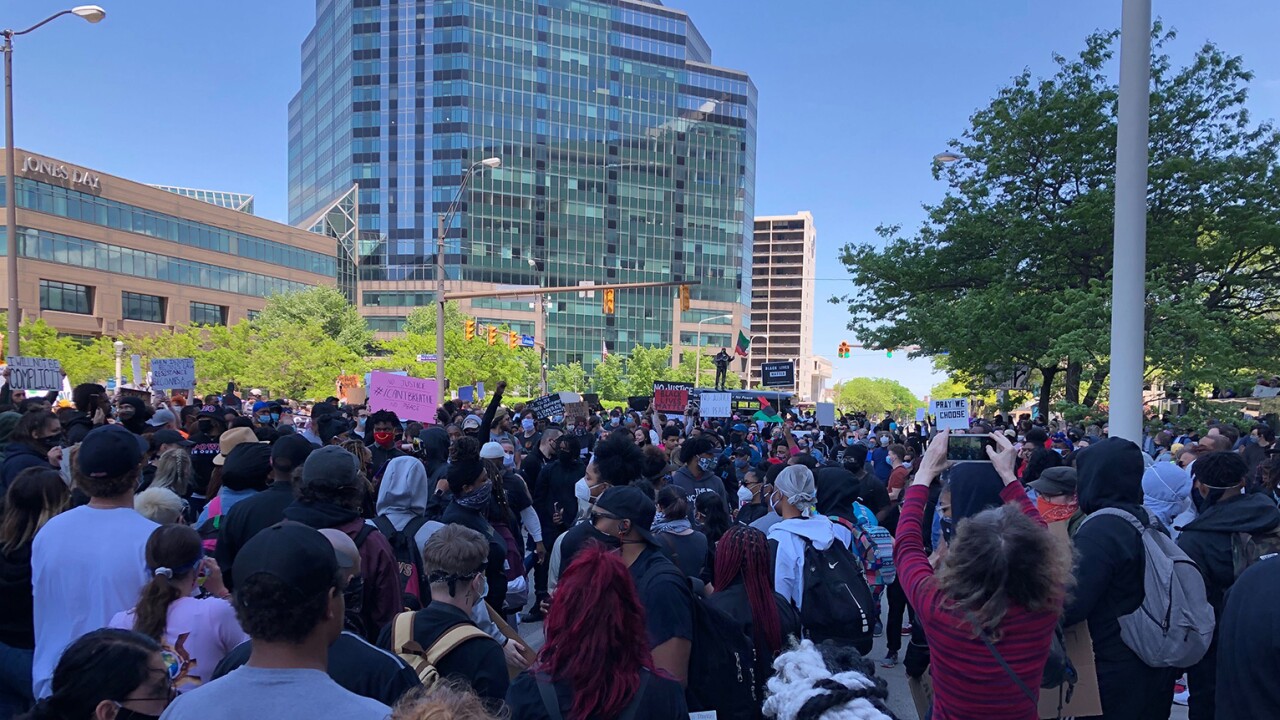 Protesters gather in Cleveland May 30 to rally against racial injustice following the death of George Floyd.

CLEVELAND — Hundreds of Cleveland residents and visitors are planning to gather at the iconic Free Stamp for a demonstration to protest the death of George Floyd and racial injustice.

The event is scheduled to start at 2 p.m. and run until 5 p.m. The Free Stamp in Willard Park is located at East 9th Street and Lakeside Avenue.

You can watch the event in the player below around 2 p.m.

"Every breath we take is precious, especially during this time. To see the life choked out of our kindred brother George Floyd as horrific and horrendous as it was; it's a constant reminder that the color of our skin will always be weaponized against us. It's a constant reminder that Black Lives Don't Matter in America when you are presumed to be a criminal," event organizers said on Facebook.

Cleveland’s protest follows others that have occurred around the country. On Thursday, protesters turned out for a demonstration in Columbus that began peacefully but turned violent, with windows smashed at the Ohio Statehouse and storefronts along surrounding downtown streets.

Event organizers for Cleveland’s protest have called for it to be a peaceful demonstration.

“As African American men and leaders, we understand the outrage expressed across the country and locally. Citizens have a right to exercise their First Amendment rights to free speech and assembly.

The city of Cleveland has experienced incidents over recent years which have brought people into our streets in peaceful demonstration. We are proud that demonstrations in Cleveland have largely remained peaceful. Our officers acknowledge and respect citizens’ rights and will take the necessary steps to protect those who choose to demonstrate. We request - for the safety of demonstrators, residents of the areas where these gatherings may occur and our officers – that demonstrators assemble lawfully. We expect that those who choose to demonstrate do so, as they have before, in a way that respects our city.

This is a unique situation, as demonstrators will be gathering during a pandemic. We strongly encourage anyone planning to demonstrate to wear masks and properly social distance. Our officers will also be wearing personal protective equipment.”

More information can be found, here.

RELATED: Protests set to begin in Cleveland in response to George Floyd's death and racial injustice