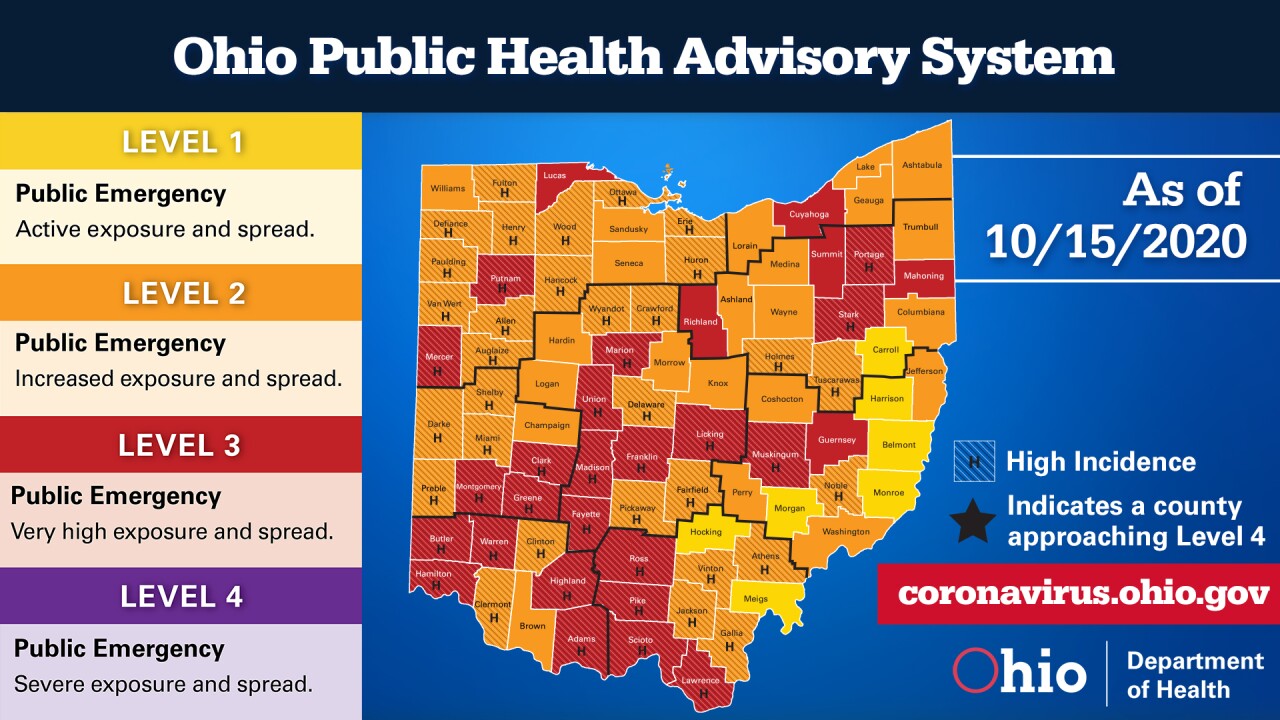 COLUMBUS, Ohio — The state of Ohio added 13 new counties ranked at red Level 3 on the COVID-19 Public Health Advisory System, bringing the total number of counties at the ranking to 29.

Gov. Mike DeWine said that 65% of the state is living within a red Level 3 county.

In Northeast Ohio, six counties are now at red Level 3 — Cuyahoga, Summit, Richland, Portage, Stark and Mahoning. All other Northeast Ohio counties are ranked at orange Level 2, other than Carroll County which is ranked at yellow Level 1 — one of just seven other counties at the lowest ranking.

In addition to the increased rankings, 52 counties across the state have been flagged as high incidence, meaning the county has seen more than 100 cases per 100,000 residents over the last two weeks, DeWine said.

Seventy of Ohio’s 88 counties are either red Level 3 or high incidence, encompassing around 10 million Ohioans.

The governor said that social gatherings such as bonfires, birthday parties, weddings and funerals have led to spikes in COVID-19 cases. He also said counties are seeing less mask compliance and many people not wearing masks around outside family groups and friend groups, increasing the spread of the virus.

“As one health commissioner said: ‘People are complacent in places where they’re comfortable’ and that’s human nature,” DeWine said. “What we’re seeing many times is people who are with friends, with family, letting their guard down, not wearing a mask, not keeping social distance.”

DeWine said that those in red counties and counties with high incidence have increasing chances of contracting the virus and need to remain vigilant.

Dr. David Margolius, division director of internal medicine at MetroHealth Medical Center, said that it’s important to look out for each other by wearing masks often and not backing away from measures to prevent the spread of the virus, because it’s still very prevalent.