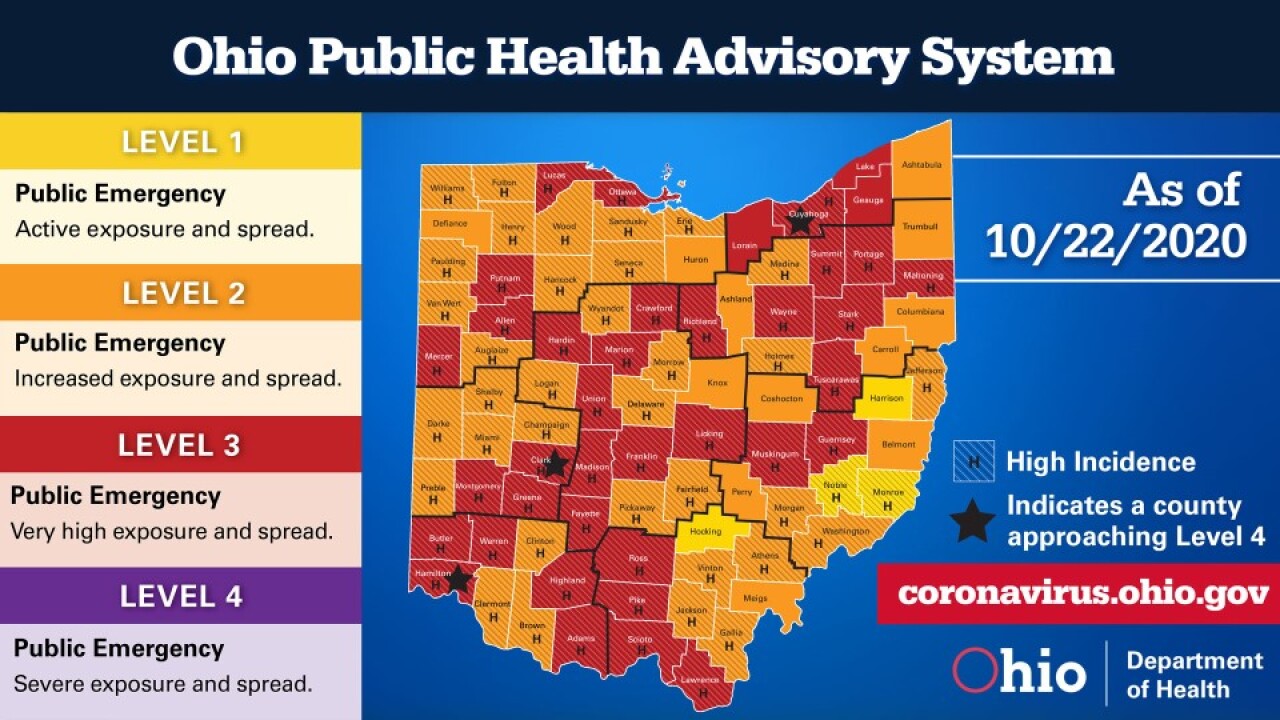 The governor said that Cuyahoga County has exceeded the Centers for Disease Control and Prevention’s threshold for high incidence and has seen a sustained increase in new cases, outpatient visits and hospital admissions.

Local health departments told the state there have been double to the case volume compared to two weeks ago and have reported increased inpatient and outpatient volume at hospitals.

Social gatherings in the county continue to be an issue, DeWine said.

The governor said the Cuyahoga County, as well as Clark and Hamilton counties which were also included in the purple Level 4 watch list, qualify as purple but in order for them to be set at the highest level on the color-coded advisory system, they must remain at that high level for two consecutive weeks.

If Cuyahoga County is flagged for six or seven of the COVID-19 indicators next week, it will be listed as purple Level 4.

In addition to counties being added to the purple Level 4 watch list, more counties across the state have increased to red Level 3. There are now 38 red Level 3 counties, meaning 74% of Ohioans are now in a county at the second-highest alert level. Forty-six counties are in orange Level 2, representing 25% of Ohio's population. Just 1% of Ohioans are in the four Level 1 yellow counties.

Lake, Lorain, Geauga, Tuscarawas and Wayne counties are among the Northeast Ohio counties that have been increased to red on the Public Health Advisory System. Geauga, Lake and Tuscarawas moved to red for the first time since the system was put into place.

Wayne County, which has exceeded the CDC’s threshold for high incidence, is seeing a sustained increase in new cases, outpatient visits and hospital admissions. An outbreak at the College of Wooster, as well as some small long-term care facility outbreaks has contributed to the ranking, DeWine said.

Tuscarawas County reported its record number of new daily cases with 41 reported on Monday. Twenty-two residents in the county are hospitalized with COVID-19 and at least three are on ventilators, DeWine said. The governor attributed the increase of the virus in the county to social gatherings in the community and spread within families.

In Geauga County, which is red for the first time, has seen sustained increases in new cases and outpatient visits. DeWine said that social gatherings continue in the county and there has been a drop-off in mask-wearing and social distancing compliance.

Lake County, also red for the first time, has seen a sustained increase in new cases and outpatient visits. The county has traced some of the virus spread to a large social gathering that was spread into a workplace. Some individuals involved in the outbreak have been resistant with contact tracing, DeWine said.

The last time Lorain County was red was at the end of August, but returned this week after a sustained increase in new cases and outpatient visits. Health department officials have traced the virus spread in the county to social gatherings including sleepovers and some workplace transmission, according to DeWine.

There are only four counties out of Ohio’s 88 that are at yellow Level 1, none of which are in Northeast Ohio.

DeWine said that 92.8% of Ohioans are now living in a county that is ranked red or is listed as having high incidence.